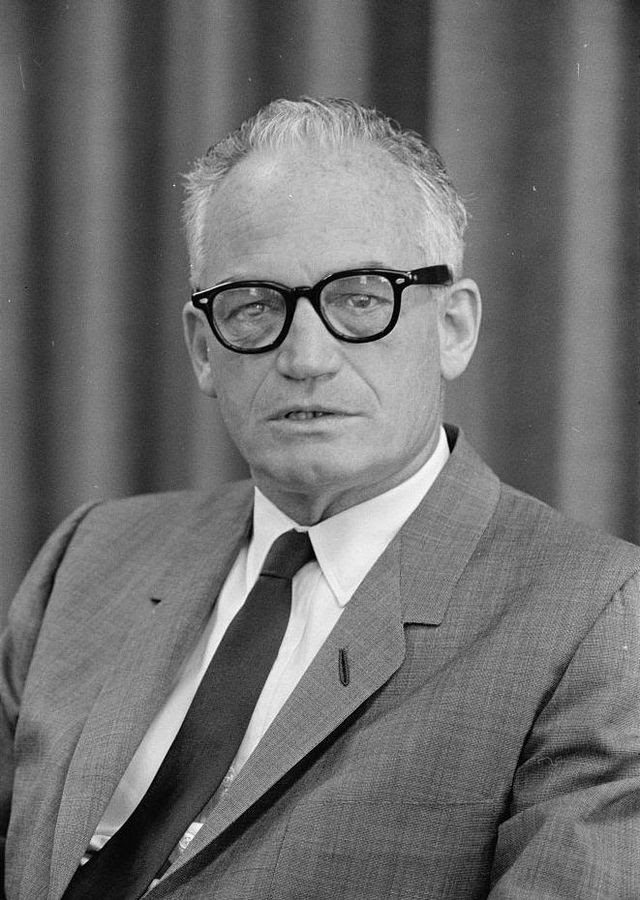 Barry Goldwater, 1962The Dissident Prof is back in Atlanta, for the holidays and doing research, and noting the changes in the city (including Decatur and DeKalb County). Millennials have taken over and they all seem to love to live in newly buillt condominiums, eat out, and shop--except for books.

In Decatur, I almost thought I was back in Greenwich Village. (I was doing research at NYU in October.)

Book stores have all but disappeared.

Millennials have been taught they know everything already so they don't need to read books. Or, going by the featured display at the Barnes & Noble on Moreland Avenue (in a shopping center that is supposed to mimic downtown shopping areas of old on the old Atlanta Gas Company site), they need only to reaffirm the old pieties about race and hate. A slew of books glorifying the Obamas was on display near the front. For serious readers in the back, an entire section was devoted to tomes about "whiteness." In the U.S. history section was of course Howard Zinn's A People's History of the United States. More on that later. .....

In Target: I walked over to Target and was dismayed to find a Starbucks in it, but happy to see they still sold slushies in a stand next to it. A father was carrying out his daughter who was about four years old. She was screaming bloody murder, demanding, "Daddy, put me down!" Her daddy was a pretty big guy, but I wondered if Mommy would have been able to do the same thing, carrying the squirming child whose yells rang out throughout the store, drowning out the Christmas music. No doubt she will be subject to Social and Emotional Learning, which will reaffirm for her her feelings about injustice and close down any intellectual curiosity she may have.

The Trump Administration has not cleaned out the Department of Education enough; the missives coming from that department seem almost indistinguishable to me from the Education Department of the previous administration. Jane Robbins is an indispensible source of information about personnel, social and emotional learning, and national data collection, at the Department. Many of her articles are published at "Truth in Education."

At the Dollar Tree, surprisingly, I found a few books in a rack being sold off for a dollar apiece. One of these "finds" was Pure Goldwater, a collection of Barry Goldwater's journal entries, letters, and excerpts from his three days of testimony in 1968 in his libel suit against Ralph Ginzburg. Ginzburg had made up things about Goldwater's mental health. The court found that the defendant had been motivated by malice and decided in favor of Goldwater.

Ginzburg had polled over 1,800 psychiatrists and published a scurrilous article in his Fact  magazine, claiming Goldwater was crazy. On my drive down, in the motel room in Harrisburg, I watched the "Democracy Now!" show. Yes, they have a show. Amy Goodman was interviewing a psychiatrist who was telling her about the mental problems that President Trump has. Some things never change.

Schools have become re-education camps and political opponents are classified as mentally ill. In the meantime, students read A People's History of the United States so never learn about what happened in the Soviet Union.

Among the points that Goldwater made was the advice he gave to Presidents Eisenhower and Nixon about what we call today "cleaning out the swamp." Both presidents had failed to do a thorough sweep so had administrations working against them.

In that pivotal year of 1960 Goldwater was writing a column for the Los Angeles Times. Well, Stephen Shadegg did the writing. Goldwater sent him ideas and approved the final draft. The exchange about education is quite interesting.


In going back through the original columns, while it is abundantly clear to those of us who understand it, I think we must repeat it and repeat it, keeping in mind that our objective is to take the onus from the word 'Conservative' and to make it acceptable to people who shy away from it today. We can do this in a philosophical way, then we can attach the definitions and expositions to the concrete subjects of legislation. We should constantlybring out in this respect that the liberals of today, using the approach of belly-politics and social welfare, are in effect doing precisely those things that our Constitution and our free enterprise system were designed to prevent.

Goldwater had been reading John Locke and John Stuart Mill. He quoted from Mill's "On Liberty" to make points about the upcoming debate on Federal Aid to Education:


The objections which are urged with reason against state education do not apply to the enforcement of education but to the state's taking upon itself to direct that education, which is a totally different thing. That the whole or any large part of the education of the people should be in state hands, I go as far as anyone in deprecating. All that has been said of the importance of individuality or character, and diversity in opinions and modes of conduct, involves diversity of education. A general state education is a mere contrivance for molding people to be exactly like one another, and as the mold in which it casts them is that which pleases the predominant power in the government, whether this be a monarch, a priesthood, an aristocracy, or the majority of the existing generation, in proportion as it is efficient and successful, it establishes a depotism over the mind, leading by natural tendency to one over the body. An education established and controlled by the state should only exist, if it exists at all, as one among many competing experiments, carried on for the purpose of example and stimulus, to keep the others up to a certain standard of excellence.

It still sounds like good advice.
Posted by Rich Kozlovich at 3:36 AM