The Poverty of Income Inequality 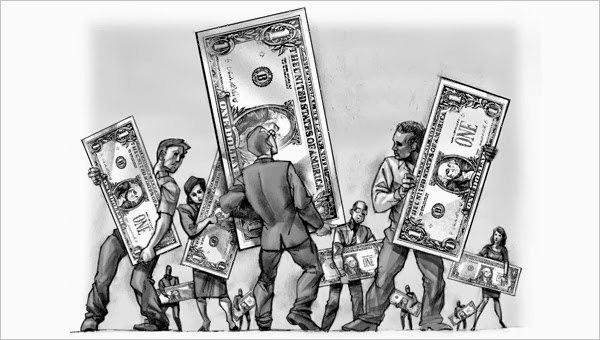 If you believe the left, the leading economic problem that Americans face today is not a lack of jobs
or the cost of living, but a crisis of CEO salaries. If only the great beast of government slumbering in the chilly waters of the Potomac would bestir itself to raise taxes on the rich some more we could move on from those $4 trillion government budgets we can’t afford to $6 trillion government budgets that we really can’t afford.

The crisis of income inequality, in which some people make a lot more money than everyone else, is irrelevant in an economy where the problem is not that incomes aren't high enough, but that they don't buy enough, and that on the second term of the man who claimed to be able to lower the water level of the oceans, there still aren't enough jobs at minimum wage or any other wage.

A look at why the price of food or used cars have risen so sharply under Obama would raise all sorts of troubling questions that that the left has no interest in exploring. Like O.J. Simpson, it already knows who the guilty party is. It’s the smug face looking back at it every morning in the mirror.

The left’s answer to the high price of medical care wasn't to discuss why prices were so high and what was behind the bizarre dysfunctional pricing ecosystem, but to wrap the whole thing up in one big government mandate complete with a planned medical economy of price controls and resource limitations administered by death panels whose existence they deny.

Its solution to cost of living issues is to raise the minimum wage.

That's a slogan that sounds good, because everyone knows more money means more money. At least until you remember that the dollar, like an Obama promise, has no absolute buying power value. And the availability of jobs isn't a fixed value either. Raising the minimum wage eliminates jobs and raises the cost of living so that those who keep their jobs now have more money that buys the same amount.

Raising the minimum wage to help the poor is a matter of destroying the village to save the village and then rebuilding a smaller version of it.

But the left’s agenda isn't to make life better for the people at the bottom of the economic ladder. It's to build up their planned economy with failed solutions that aren’t meant to solve anything. The left's solutions don't work, because the problem they’re solving isn’t economic inequity, but their own lack of absolute power. And they solve that problem with economic solutions that fail, necessitating more power grabs until they have complete control.

The progressive solution to income inequality is government intervention. But when has centralization ever produced income equality?

The Soviet Union was supposed to be a classless society. Western leftists assumed that was true. They were wrong.  Not only did the Soviet Union have a rigid hierarchy of classes, but it had the same income inequality as any other economy in its class.

After WW2, the wealthiest ten percent of Russians took home more than seven times as much as the poorest Russians did.

Factory bosses took home 100 times the salary of factory workers. Managers made five times what their employees did. A small percentage of the country wallowed in luxury while a sizable underclass struggled to put food on the table. And these figures are hopelessly inadequate to describe real income inequality in the USSR because most of the real income at the top went unreported because it was derived from corruption and bribery which were and are widespread.

Official income in the USSR was only a fraction of real income which came from access to power. The Soviet black market was the real source of much of the wealth of the Soviet official who used his position to divert goods into the black market and even of the Soviet worker who could get rich on the side if he was fortunate enough to have a position in a factory that produced something worth stealing. 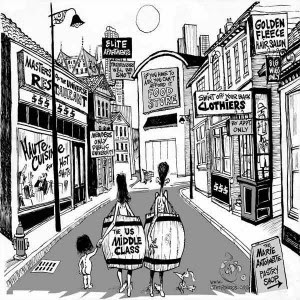 But it wasn't income inequality in the USSR that led to poverty and misery. It was the planned economy whose control of the means of production created product shortages by not producing what people wanted, rather what it thought they should have, and whose control over the means of distribution made the black market into the only real source of needed products.

The gap between the rich and the poor matters less than what the poor can buy for their money. That is why the left would rather talk about income inequality than the standard of living. It wants to play around with wealth redistribution, instead of dismantling their programs that make life so expensive. The same hypocrites jabbering about income inequality dream of imposing a Green carbon tax on everyone that will further raise the prices of all goods and services.

The left inflicts poverty and then campaigns against it. It raises the prices of products and the cost of services, it devalues incomes, destroys jobs and raises energy prices… and demands even more regulatory powers so that it can finally solve the poverty mess it creates once and for all.

The United States has three times the income inequality rate of the Post-Communist Slovak Republic. But do you really want to live in the Slovak Republic, the second poorest member of the Eurozone, where the average monthly salary is barely above a thousand dollars a month and prices aren't nearly low enough to make up for the difference in disposable income.

Income inequality doesn't always mean prosperity. It can mean that, as it does in Mexico, that an elite has locked up the economy. It can also mean that the economy is productive. Income equality however usually means stagnation. Even more often it means that much of the real economic activity is unregulated, taking either in a black market or abroad.

Outside of the class warfare agenda, income inequality is not in and of itself meaningful. It exists as a political slogan.

Even if we assume that income inequality, rather than the standard of living, is the issue to focus on, the worst possible way to achieve it is through more centralization. Free enterprise top 1 and 10 percent incomes are vulnerable to market fluctuations. That's not the case in the Socialist sphere where incomes remain high regardless of economic performance.

A CEO who runs a company as badly as Obama runs the country risks his job. Obama risks nothing. Neither do the army of staffers and bureaucrats, many pulling down six-figure incomes, who make up his regime.

Progressives might try to argue that Obama won those cities based on the support of the poor, not the rich, but he also won 8 of the 10 wealthiest counties in the nation. Not only did he win them, but he won them by margins greater than the national vote. And that shouldn't be surprising, since of the wealthiest men in America, numbers one and two were both strong supporters of his campaign.

But the left doesn't actually hate the rich. To do that it would have to hate itself.

Occupy Wall Street wasn't a bunch of unemployed workers looking for a more compassionate economy. A third of the Occupiers had household incomes of six figures. The majority were college grads and 39 percent of the latter had graduate degrees.

The left does hate people who work for a living. The poster child for its childish screeds is Elizabeth Warren, a populist voice of the people who spent three-quarters of a million on a condo as soon as she got to Washington D.C. and once scored $90,000 from the government for serving as an expert witness.

The left argues that the income inequality in this country shows that we have an oligarchy. They're right. And they're the oligarchy.

In Washington D.C. there is an oligarchy that monopolizes wealth and loots the working people. It's not a capitalist oligarchy even though it includes plenty of CEOs. It's a government oligarchy just as it was in the Soviet Union. 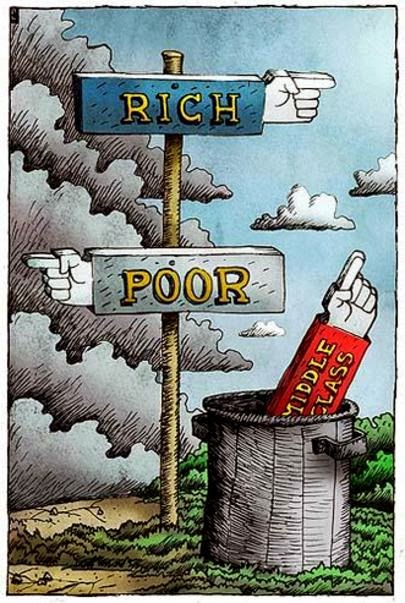 The left's hypocrisy on income inequality is so obscenely ridiculous that it surpasses satire. Warren Buffett, the second-richest man in America, made billions from a bailout that he helped shape, and then campaigned with Obama against income inequality complaining that the rich were not paying enough taxes.

Because if the rich paid even more taxes than they already do, he would be able to profit from even more government bailouts when progressive profiteering from government-mandated social justice mortgages goes awry.

The left can shriek about raising the minimum wage all it likes, but the American worker today makes 57% less an hour than he did in 1970. The left's class warfare is built on a foundation of fake money and lies. Its governments can play with these numbers all they like, but they cannot and will not restore the standard of living that Americans had in 1970.
Posted by Rich Kozlovich at 6:41 AM