This has played fairly large on the news that an Iranian journalist says:


'No Israeli coronavirus vaccine for me,' Iranian journalist tweets.  "I'd rather take my chances with the virus than consume an Israeli vaccine — Roshan M Salih (@RmSalih) March 12, 2020

Well, the consensus seems to be:  May he be blessed with 72 virgins!

It's interesting how people think, and this kind of thinking isn’t anything new. What most people are probably not aware of (possibly even those in the pest control industry) that using quinine as a treatment for malaria goes back centuries. Known then as the Jesuit’s bark, the Cardinal’s Powder, or as Oliver Cromwell called it, the Popish Powder.

Oliver Cromwell was a Puritan who defeated Catholic Charles I, King of England, in battle.  Later beheaded him, and became the Lord Protector for five years. Then he contracted malaria. Cromwell hated all things Catholic and refused to take the 'popish powder', and died at 59.

Malaria has been pandemic eternally, at least until the arrival of that Magic Powder and Weapon of Mass Survival appeared – DDT.  Environmental activists have done their best to revive its eternal pandemic status.

Admittedly, this will vary around the world depending on their sanitary conditions, which in much of the world is unbelievably disgusting.  But just how worried should this journalist be, even living in Iran where the threat is mostly likely greater?    What is the real threat? 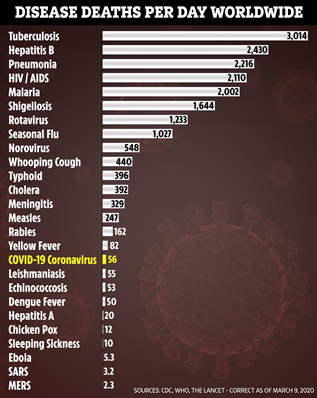 Pandemics come and pandemics go, but how much damage do they do?  These pandemics we've experienced in recent years aren't the Black Plague, nor are they the Spanish Influenza.

So where does this pandemic stand on what I'm calling a "health crisis chart" from the CDC?

You will notice Malaria, which is eternal, is still number five on the chart.  Tuberculosis deaths worldwide must clearly justify calling it a pandemic.  Don't you think?  Why isn't it?

Because it's a lot like malaria, it's eternal, so it's not an emotion grabber.  Even though TB in the third world has developed resistance to drug treatments.

You will also notice that "seasonal flu" is number eight.  Why isn't it a pandemic?  And when I see whooping cough is number ten, I really get outraged because there's a vaccine readily available to prevent it.  The appearance of Whooping Cough in the third world is understandable for three reasons.  Cost, incompetence, and socialized medicine.  But why are we having cases of it in America?

Because irresponsible activists are scaring parents making false claims about vaccines and autism in children.  That hysteria has caused children in the United States to unnecessarily suffer and even die as a result.

Steve Milloy of Junkscience.com posted this on LinkedIn:


These bubble charts are ridiculous. This one from Johns Hopkins. There are 7.6 billion people in the world but only 156,400 cases of #WuhanVirus.

Silly chart makes it look like humanity is being overtaken with disease. https://arcgis.com/apps/opsdashbo

Jim ONeill posted the article, The Convenient Timing of the Coronavirus saying:


It is no secret that the Left would rather destroy the US economy than risk four more years of Trump.......... With the 2020 elections looming large, the coronavirus panic seems to be conveniently timed to damage the US economy, and distract We the People from important topics such as FISA abuse, roots of the Russia hoax, and Biden’s dealings with Burisma.

The media is, of course, adding fuel to the fire of panic with their “lions, tigers, and bears, oh my!” coverage of the virus. The silver lining here is that with coronavirus the globalist Left has jumped the shark (again), and jumped the gun (again).

Their over-the-top coverage of the coronavirus, while perhaps effective for their cause in the short term, will eventually boomerang on them (where have we seen this before?) as it becomes obvious over time that they have been crying wolf too loudly and for too long.

He notes: "There is a world of difference between taking something seriously, and panicking over it."

People are going insane storming the stores wiping out toilet paper and actually fighting over items on the shelves.  See, and you thought they only did that at Christmas time while celebrating the birth of the Prince of Peace.

Here in Ohio we have a .....well..... not so bright Governor, who has decided to shut down all the bars and restaurants in the entire state!  In the meanwhile, people are cancelling all sorts of events, including professional sports.  People are becoming hysterical in fear if they shake someone’s hand they may die.

In a couple of months all this hyperbole regarding coronavirus will be done.   At that point everyone will stop and think when it's over..........Was that it?

Well, I doubt there's any industry in the nation that's in more diverse situations on a daily basis than the pest control industry.   It would be interesting to see a piece regarding just how many exterminators came down with this affliction, how much time was lost, and the overall effects of the coronavirus on those who may have contracted this disease.

Oh, one more thing.  Last week I blamed Howard Zinn and Noam Chomsky because I despise both of them.  Just as the left, without any justification, blames Donald Trump because it it makes them feel good to do so, it makes me feel good to do the same.  And as promised, I blame Charles Darwin today for the same reason.

P.S.  I will be reviewing Tom Wolfe's book, "The Kingdom of Speech", where he outlines just how contemptable these three were.

Posted by Rich Kozlovich at 7:00 AM

Email ThisBlogThis!Share to TwitterShare to FacebookShare to Pinterest
Labels: Coronavirus, My Commentary, My Coronavirus Commentary