Dr. Bandy Lee thinks she’s so good at what she does she doesn’t have to meet a patient to know they’re nuts…or unfit….or who knows what. She has claimed Donald Trump is unfit for office. Really? Amazing diagnosis! And that diagnosis is based on what?

As far as I can tell, that “diagnosis” is based on nothing except her dislike for Donald Trump.  How could anyone refute that kind of medical science? Right? That’s of course if everyone is assuming psychiatry is really medical science.   Or is it a science of misrepresentation, and make it up as they go along?  She even claims he's so powerful he's brainwashed his supporters. Which makes them all unfit also.

However, the Board of Psychiatrists find fault with diagnosis without examination. It’s considered malpractice, and she's now diagnosed tens of millions of people she's never met or even heard of. Amazing!!   But Bandy has assured Democrats in Congress Trump is unfit, and she has a “duty to warn”. 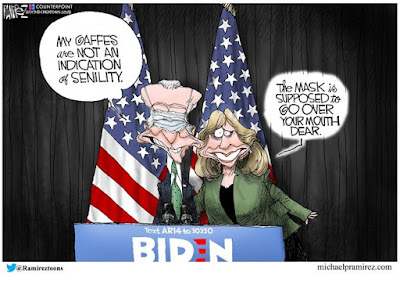 Is it her "duty to warm" us about Joe Biden also?

What is her diagnosis of Joe Biden?

After all, it’s clear (and I want to use the correct medical term here) Joe is in deep mental donkey doo.

His mental condition is so observably bad even reporters can tell he’s lost it.  If reporters get it you know how bad it must be.

But, this psychiatric genius, who can watch Trump on television and read articles about him, can diagnosis him as unfit.  Okay, but if she has this overwhelming "duty to warn" America about the mental unfitness of politicians, why does she refuse to diagnose Biden?

Furthermore, it must be clear to the most casual observer that Bernie Sanders, Hillary Clinton, Nancy Pelosi, and most certainly Maxine Waters, along with a host of others in politics suffer from some sort of mental disorder or other, yet she offers no diagnosis about any of them, or their supporters.

Now, there's nothing partisan about that. Is there?

Unless of course you believe all leftists are so obviously, observably, and insufferably nuts no further diagnosis is necessary. How’s that sound? I like it! Also, I can do that with impunity because I'm not an doctor!

Well, Bandy has had her fifteen minutes of fame, and is now under a microscope. Here’s my diagnosis, she’s nuts, and her career is done!  See, I can also say that with impunity because I'm not a doctor.  However, I'm an exterminator, as a result, I can spot a pest a mile off.  So too can those in responsible positions in her field:

“The American Psychiatric Association (APA) declared it “unethical for a psychiatrist to offer a professional opinion” on a public figure for whom they have neither given a face-to-face examination nor received legal consent to disclose said patient’s medical information”.  It’s considered the “Goldwater Rule.”

‘“The Goldwater Rule” was established during the Cold War after 1,189 psychiatrists declared Republican Senator and presidential candidate Barry Goldwater “psychologically unfit” to be president in a successful bid to ruin his campaign.

Goldwater won his lawsuit against Fact Magazine for organizing and publishing the poll of psychiatrists. Just as Dr. Lee is leading a nearly identical movement against Trump and published a book claiming that “hundreds of mental health experts” agree with her, she could also very easily be sued for violating the same ethical rule.”

Remember her “duty to warn”?  What exactly does she have to warn us about?


“Trump is going to wipe out all of humanity.”

She wants to declare:


“a public health emergency that needs to be responded to as quickly as possible. As more time passes, we come closer to the greatest risk of danger, one that could even mean the extinction of the human species,” ….“This is not hyperbole. This is the reality.”

Wow!  How could any reasonable person think that’s nuts?  Well maybe, since someone did say that her "Newsweek interview was a disturbingly mentally deranged rant."   Her claims go on and on, and they’re being denounced as “tawdry, indulgent, fatuous tabloid psychiatry” but her rants have "obliterated her claim of having a “duty to warn.”'

If she's any standard of her profession, the lunatics really are running the asylum.  If she's not the standard of the profession, when is her license to practice going to be revoked? After all, by the accepted standards of her profession she's clearly "mentally unfit", or is she still working at Yale, making Yale's fitness an issue?

Posted by Rich Kozlovich at 5:35 AM