Leak in the Pension Dam 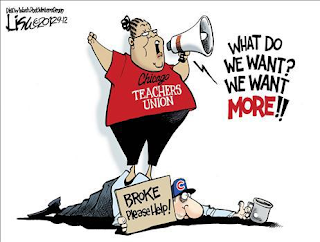 For decades, I’ve watched unions, both private sector and public service, collude with the Democrat Party to boost salaries, benefits, and pensions to levels unattainable to the average non-union American worker, all the time wondering, "How the hell are they ever going to keep that going?”

For years when we encountered one of those big lumbering, quarter-million dollar motor homes, my wife and I would joke, “There goes another retired lawyer or doctor.” These days, based on publicly available data, our speculation is that it’s likely a retired cop or fireman. We visited old college friends a couple of years ago at their very nice home on a lush fairway in the desert southwest. He’s a retired public utility worker and union official while she’s a school administrator.

While he was showing me the yard I spotted a two-story Spanish Colonial style mansion across the fairway and observed, “Looks like you have some very well-to-do neighbors.” His response was, “That? Nah, he’s a retired fireman.” Today I spoke with my brother in California about this situation, and he informed me that he has seen on open public records that retired fire department captains in his home town are drawing $130,000 per year from the public trough. Are you beginning to see my concern? ..........Read more
Posted by Rich Kozlovich at 5:47 AM

Email ThisBlogThis!Share to TwitterShare to FacebookShare to Pinterest
Labels: Unions