Slaughter of the Innocents

The slaughter of twenty-some innocents at Sandy Hook sent shock waves through the nation. The thought of these young lives snuffed out by a “crazy man” was more than the nation’s conscience could bear. A national outcry was heard to protect our young children. The media went into overdrive to ferret out every detail of the killer’s life, the victims’ lives, and the mother of the shooter’s life and to start the blame game. 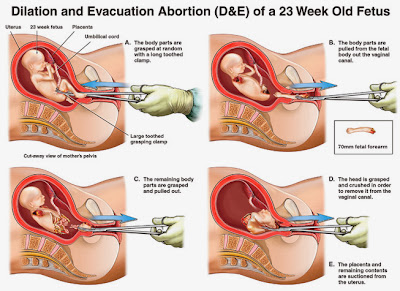 However, in the year since this hideous crime, there has been a more horrendous crime going on every day. There have been approximately 1.2 million innocents slaughtered and you don’t hear a word on the news or any protests about it. That is the number of abortions in an average year in America. Think of it, 1.2 million innocents who haven’t even had a chance to be born are slaughtered for “convenience”. Where is the compassion for these tiny lives being snuffed out even before they take their first breath? Are they “less human” because they haven’t been born yet? I don’t think so. They carry the same genetic code as all of us do. Even if they cannot live outside their mother’s womb, they still share our humanity. Is it morally acceptable to trade their lives for our “pleasure”? Read more at
Posted by Rich Kozlovich at 7:20 PM