The Cutting Room Files, Part 2: The Future of Mexico

by Peter Zeihan and Michael N. Nayebi-Oskoui on October 21, 2019 @ Peter Zeihan on Geopolitics Visit the archives to re-read and share

This piece is part of the Cutting Room Files, portions of the upcoming Disunited Nations text that were cut for length. Disunited Nations is available for pre-Order now on  Amazon.com, Harper Collins, and IndieBound

American-Mexican relations have been…colorful of late. American President Donald Trump has threatened Mexico with a rising tariff system that would constitute the greatest tariff effort in dollar terms by Americans in their history. Mexican President Andres Manuel Lopez Obrador (AMLO) is pushing a change to tax law that would more or less treat businesspeople like money launderers which would throw trade relations into the freezer. Threats and counterthreats on migration and trade and law enforcement and energy and water rights have ratcheted up to near-crisis levels.

This is actually… really good. Ever since Mexican independence in the early 19th century, American-Mexican relations have oscillated between cold-shoulders and American invasions. Today, really for the first time in both countries’ histories, the Americans and Mexicans are not talking past one another, but instead speaking with each other. The process is loud and messy, yes, but it is actually a conversation. The United States and Mexico are working out deals, making functional compromises, and finding common ground. What’s been happening the past two years are the sorts of interactions one would expect between two countries who find themselves increasingly intermingled both economically and demographically. We all fight most vociferously with our families.

That hardly means it is all well thought out. One of the most frustrating things about working in the geopolitical forecasting space is that sometimes luck plays a role, and that has most certainly been the case of late.

Consider the individuals helming both countries.

In the United States, Donald Trump rose to power on a wave unapologetic nativism, which expressly included a harsh campaign against Mexico on economic, political, security and racist grounds. On the other side of the border is AMLO, a guy who combined Trump’s disdain of foreigners, Elizabeth Warren’s enthusiasm for dressing down corporate interests, Ted Cruz’s penchant for blind obedience to ideological dogma, a Clinton-esque love-affair with political corruption, and Bernie Sanders’ pathological refusal to engage in basic mathematics. It’s difficult to imagine a set-up that would be less constructive to functional bilateral relations.

And yet, here we are, with the Americans and Mexicans enjoying the most positive bilateral relationship ever br />
The unexpected outcome largely has to do with an olive branch from AMLO. After his election in mid-2018, but before his inauguration in late-2018, AMLO apparently had an epiphany. He realized that if he and Trump engaged in a binational pissing contest over who was more populist, the bad blood would consume his entire presidency. As he had put together a laundry list of tasks to remake Mexico in his own image, that simply would not do. So he reached out to both his predecessor and Trump, and indicated that if they could complete the renegotiation of NAFTA2 before he took office, he would not seek to reopen talks and would ensure the new deal would be ratified in a timely manner.

AMLO has since proven to be a man of his word. Mexican ratification occurred on June 19 of this year.

While there are obviously portions of NAFTA2 the Mexicans are less than enthused about and the new deal will disrupt a great many industrial patterns across the length and breadth of Mexico, for the most part the new deal is as much a win for Mexico as it is for the United States.

Among the Trump administration’s biggest goals in the NAFTA renegotiations was to make sure goods that benefitted from the low tariffs of the NAFTA system were mostly produced inside of it. These “rules of origin” quotas were increased and ensure that a certain percentage of the product’s value was produced within Mexico, Canada, and the United States rather than outside of it. As Mexican manufacturing capacity is both less expensive and more efficient than most manufacturing in both China and Canada, Mexico will certainly pick up a disproportionate share of whatever relocates to the North American market. Add in the general breakdown of the global Order, and Mexico’s now-even-more-privileged access to the American market, and Mexico’s economic future looks brighter and brighter.

Merchandise trade is only one of several aspects of a tightening, more constructive, relationship between the two North American powers.

Taken together, Mexico is now America’s second-largest partner in energy, trade, agriculture and security, and is on the cusp of taking the top spot in all categories.

So… that’s the good news.

Understanding the bad news requires a bit of a step back.

Roughly a decade ago Mexican and American authorities were tracking hundreds of small groups involved in moving cocaine and marijuana through Mexico to America’s southern border. Just as mountainous regions help fracture regions among several competing countries, Mexico’s mountainous geography meant no single drug trafficking organization (DTO) could command all that much territory. A small DTO might control a single stretch of highway, or a single city or a local shake-down racket. Violence between these groups and Mexican law enforcement was horrific, but that carnage was nothing compared the violence among the various drug trafficking groups as they battled to expand their role in the drug trade or defend their patches from one another. In that environment, Mexico’s murder rate soared. 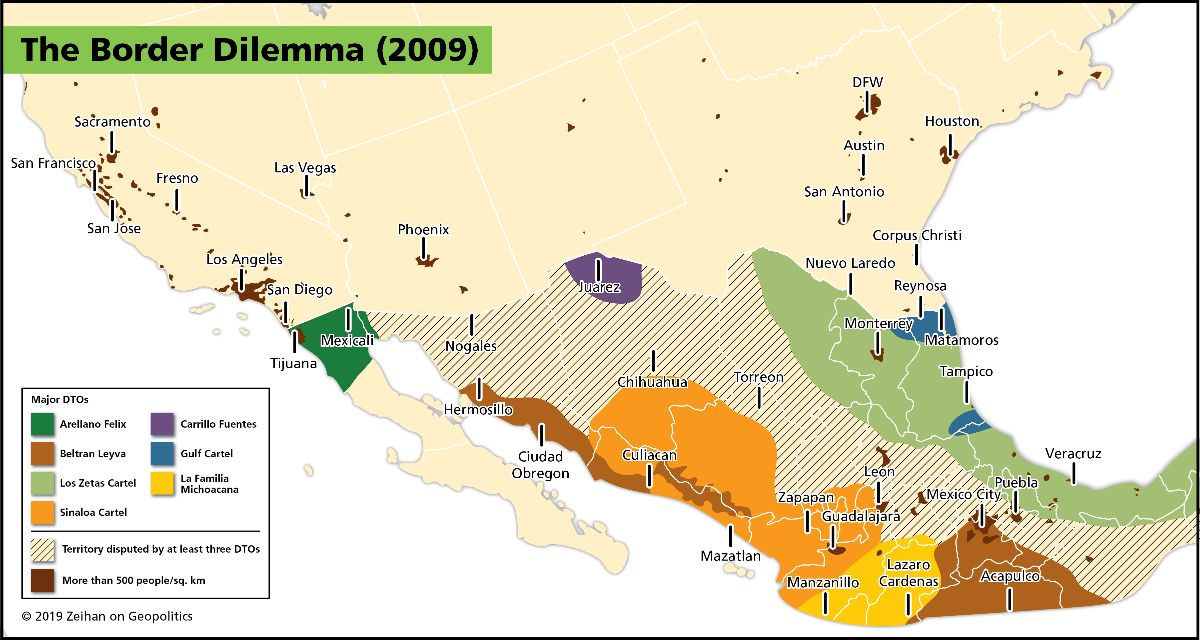 But even then, not all DTOs were created equal because not all DTO leaders were created equal. Today’s story involves a 5’ 6” dude by the name of Joaquín Guzmán, aka El Chapo (which roughly translates as “shorty”), who ran his drug group less like the Sopranos or a street gang, and more like a Korean chaebol.

Under his hand, the Sinaloa alliance focused on three general themes:

El Chapo’s strategies were so successful the Sinaloa grew to become the most powerful organized crime group not simply in Mexico, but the world. As the Sinaloa alliance expanded and deepened, violence among its constituent components plummeted. After all, they were all on the same side, and El Chapo did not tolerate infighting. Mexico’s murder rate fell. 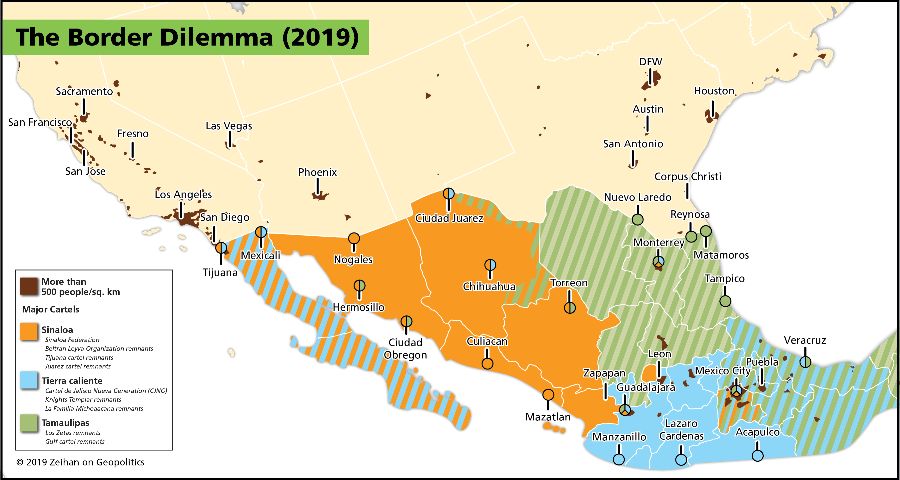 Which brings us to the fourth and arguably most important outcome. El Chapo’s business diversification efforts combined with the breakdown in the “peaceful” nature of the Sinaloa’s management strategy combined with the rapidly deepening economic integration between the American and Mexican markets means that the cartels are now becoming part of the North American economic picture and they are bringing their violence levels with them.

At present this expansion has not penetrated manufacturing – that’s an industry that’s simply too high value-add and too finance-heavy for easy links with DTOs. But nearly everything else is game: transport, trucking, energy, agriculture, construction, tourism, real estate. All these sectors and more now have DTO threads woven throughout, particularly in the Sinaloa heartland of northwest Mexico. And it doesn’t take a big leap to link these Mexican sectors with their American peers. First landfall of Mexican DTOs in these veins will be U.S. regions just across the border from Sinaloa strongholds: Tucson, Phoenix, El Paso, San Diego, Los Angeles and the California Central Valley.

It is worth remembering that while the collapse of the global Order has consequences for everyone, and in many cases those consequences will be the determining factor in a country’s future, regional and local factors don’t simple fade away. Countries’ local geographies and local economic trends and local histories remain relevant. Global shifts are likely to favor Mexico more than any other country, but it can still get tripped up on issues closer to home.

And the same goes for the third NAFTA partner…

Posted by Rich Kozlovich at 7:24 AM