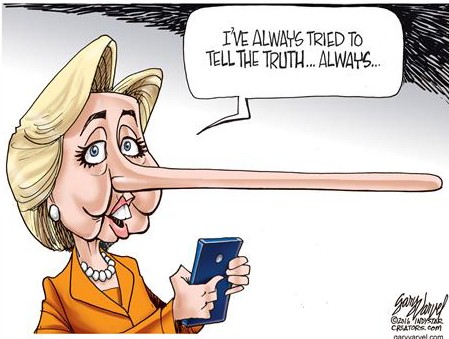 Being the psychopath she is....she probably believes it. Yesterday I stumbled across this article, The Clintons’ Greatest Shame: Chelsea is the biological daughter of Webb Hubbell and not Bill Clinton! , which goes way beyond Chelsea's parentage, and even stuns me to the depth of degradation to which this family has stooped.

In the past I've always stayed away from these articles about her parentage because she's not responsible for what her parents did or didn't do. I used to feel sorry for Chelsea being stuck with such parents, I'm sure she had to see and hear things going on no child should be exposed to, but she's now jumped on the Clinton bandwagon.  My sympathy for her plight has waned.

A couple more things in this piece. So many have wondered why the Clinton's and the Bush's were so buddy buddy over the years.  Bush kept his mouth shut about Obama for eight years, yet couldn't help becoming a "Never Trumper",  shooting off his mouth when Trump was running against Hillary, and after.  Well, now I understand, and I now know why I never liked the Bush's - either one of them!  Also, when John McCain was dying he was the vicious obnoxious jerk he's always been. Yet so many thought it was terrible Trump had the nerve to defend himself against this dying "war hero".

Well, McCain was always high smelling and low down. I had forgotten this, but when Chelsea was 13 or so he commented publicly the reason Chelsea was so ugly was because Janet Reno was her father.

What kind of "war hero" would publicly say such a thing about a 13 year old kid?

High smelling and low down!

Finally, and given my views of Bill Clinton this may surprise you, it seems to me that Bill really loves Chelsea as his daughter, and if all that's being said is true, he's to be commended for that!

Every child deserves to be loved by their parents!
Posted by Rich Kozlovich at 6:29 AM

Email ThisBlogThis!Share to TwitterShare to FacebookShare to Pinterest
Labels: Cartoon of the Day, Hillary, My Commentary