Cartoon of the Day, Plus

When LeBron first made it big it was in Cleveland, and my town lauded and praised our home town boy making good.   When he left the first time he was such a jerk.  He spoke so disparagingly about Cleveland, he in effect spit on us.

When he came back everyone jumped on the LeBron bandwagon, since he was gong to bring a championship to Cleveland.  I said he spit on us as he walked away and as far as I was concerned he was a jerk them and he's a jerk now.

After all the crap he's pulled I hope my fellow Clevelanders see him as I've seen him all these years.

As for the rest of the world? LeBron's terrible, horrible, no-good, very bad week.  Good news for LeBron! He may be making a little bit of money as protesters buy his jersey to burn in effigy......... More 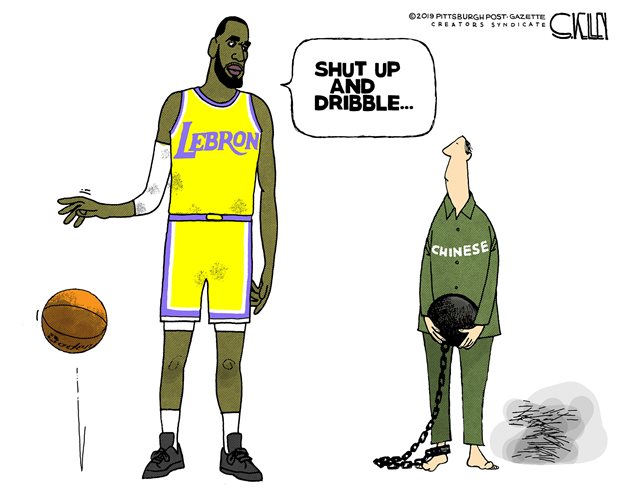 Posted by Rich Kozlovich at 3:31 AM

Email ThisBlogThis!Share to TwitterShare to FacebookShare to Pinterest
Labels: Cartoon of the Day, China, Hong Kong, LaBron, Plus