I have a series of columns where I explore tactical disagreements with folks who generally favor free markets and less government.
Today, we’re going to revisit the carbon tax because Josiah Neeley and William Murray of the R Street Institute have a column in the Hill that claims that levy would not finance bigger government.

…There have been numerous tax rate changes in the past 70 years, with the marginal income tax rate falling from a high of over 90 percent in the 1950s to as low as 28 percent in the late 1980s. Yet during this entire time period, federal tax revenue has stayed in a fairly narrow band when measured as a percentage of gross domestic product, never rising above 20 percent or falling much below 15 percent between 1950 and 2018. This phenomenon, which keeps federal revenues within a relatively narrow band, is known as Hauser’s law…the belief that any kind of new taxation introduces even greater government spending is based on very little actual evidence. Instead, Hauser’s law provides evidence that certain kinds of tax swaps, such as exchanging an income tax for a carbon tax, may actually increase the rate of economic growth without increasing the tax share of the overall economy.

I have two responses to this analysis.

First, I very much want Hauser’s Law to be true. It would be very comforting if politicians in Washington could never seize more than 20 percent of the private sector’s output. 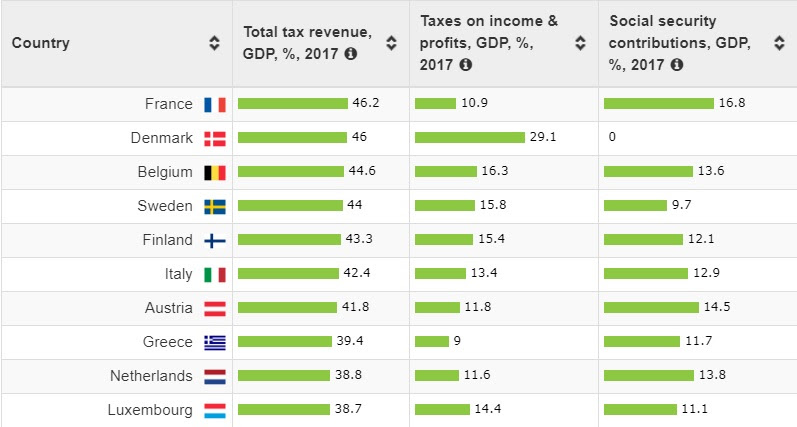 Needless to say, a carbon tax would be a step in that direction.
Second, the authors offer zero evidence that “government spending drives tax policy, not the other way around.”

By contrast, there is some persuasive data for the “starve the beast” hypothesis, which is based on the notion that higher taxes will encourage more spending.

In other words, Milton Friedman was right when he warned that “History shows that over a long period of time government will spend whatever the tax system raises plus as much more as it can get away with.”

The column in the Hill is a spin-off from a recent study published by the R Street Institute.
Let’s look at that publication to further explore this issue. It starts with the basic hypothesis that a revenue-neutral carbon tax would be desirable.

…a carbon tax…provides a source of revenue that can be put to beneficial purposes, such as funding cuts to other existing taxes. By using the revenue from a carbon tax to replace existing ones, such a revenue neutral “tax swap” would greatly reduce or eliminate the economic costs of the tax. Indeed, in some cases, even if benefits from reduced emissions are not considered, a tax swap could be a net positive for the economy. …many critics of a carbon tax are skeptical as to whether a revenue-neutral carbon tax could be enacted. Some critics go further, arguing that even if a carbon tax started out as revenue neutral, it would not remain so. …While there are no guarantees, the existing evidence suggests that a revenue-neutral carbon tax would not lead to larger government over the long term and could even shrink it.

I don’t object to the notion that a carbon tax would be theoretically desirable if it replaced a tax that did more damage per dollar collected, such as the corporate income tax.

My concern has always been such a swap is highly unlikely. Indeed, many proponents of the carbon tax are very explicit about wanting to use the revenues to create a new entitlement. That would be the worst outcome, assuming we want more growth.

And, as noted above, I don’t think Hauser’s Law would save us from higher overall taxes and a larger burden of government spending.


…given that Hauser’s Law is not an iron law of economics, it would be imprudent to put too much weight on it when considering the effects of a tax swap.

There are a couple of other parts of the study that deserve attention, including the assertion that politicians would have a hard time using the carbon tax as a money machine.


…a carbon tax has natural limitations that preclude it from being used to generate ever-increasing amounts of tax revenue. This is because higher carbon-tax rates induce a more rapid fall in greenhouse gas emissions. This, in turn, limits the overall revenue collected from the tax. In fact, unlike revenue from income, sales or property taxes, which tends to increase over time even at a constant tax rate, revenue from a carbon tax is likely to remain stable or fall gradually as emissions decline.

Since I’m a fan of the Laffer Curve, I think this argument is very reasonable in theory.
In effect, the R Street Institute is making the same argument – excessive tax rates can reduce revenue – that Alexander Hamilton used when endorsing tariffs.

But where is the point where carbon taxes become excessive? I don’t know the answer, but I’m very worried that there would be ample leeway to collect a lot of tax revenue before getting close to the revenue-maximizing point (the Congressional Budget Office estimates that a $25-per-ton carbon tax would generate more than $1 trillion in the first ten years).

The bottom line is that I worry that a carbon tax likely would be akin to a value-added tax. Yes, there are negative feedback effects from a VAT, as I noted at the end of yesterday’s column. But that doesn’t change the fact that the revenue-generating capacity of the VAT helps to explain Europe’s bloated welfare states.

I understand how a carbon tax, in theory, might not enable bigger government. But I see no way, in reality, that politicians wouldn’t use this new levy to finance even more spending.

P.S. If you’re not already convinced that a carbon tax will mean bigger government, then all you need to know is that both the International Monetary Fund and the Organization for Economic Cooperation and Development support higher energy taxes for the United States.
Posted by Rich Kozlovich at 5:20 AM