The concept of secession (part of a jurisdiction breaking away to become independent) has a bad reputation in the United States because it is linked to the reprehensible institution of slavery.
But, as Walter Williams has explained, secession today may be an effective way of protecting liberty from ever-expanding centralized government.

And I’ve favorably written about secessionist movements in Sardinia, Scotland, and Belgium, largely because the historical data shows that better policy is more likely when there are many jurisdictions competing with each other.

So it was with considerable interest that I saw an article in Fortune about a secessionist movement in California.


“Calexit” didn’t start with Donald Trump, but his victory on Election Day certainly sparked more interest in the idea. A play on “Brexit,” it’s the new name for the prospect of California seceding from the U.S. The movement…seems to have gained steam in the past six months, thanks in part to the U.K.’s recent Brexit vote and Donald Trump being elected president. …The group’s goal is to hold a referendum in 2018 that, if passed, would transition California into its own independent country. …the movement has even grabbed the attention of some potential Silicon Valley bankrollers.

I like this idea, though I’m not sure it’s good for California since the state faces very serious long-run challenges.

Though this is one of the reasons I like secession. As an independent nation, California no longer would have any hope of getting a bailout from Washington, so the politicians in Sacramento might start behaving more responsibly.

And there are examples of secession in the modern world, such as Slovakia and the Czech Republic emerging from Czechoslovakia. That was a very tranquil divorce, unlike what happened in the former Yugoslavia.

As is so often the case, we can learn a lot from Switzerland. There is a right of secession, albeit dependent on a nationwide vote of approval. Municipalities also can vote to switch cantons, as happened in 1996 when Vellerat left Bern and became part of Jura. By the way, villages in Liechtenstein have the unilateral right to secede from the rest of the nation (though that seems highly unlikely since it is the second-richest nation in the world).

Notwithstanding these good role models, the secessionist movement in California presumably won’t get very far.

But maybe full-blown secession isn’t necessary. If Californians don’t like what’s happening in Washington (or, for that matter, if Texans aren’t happy with the antics in DC), that should be an argument for genuine and comprehensive federalism.

In other words, get rid of the one-size-fits-all policies emanating from the central government and allow states to decide the size and scope of government.

California can decide to do crazy things (such as regulate babysitters and give bureaucrats too much pay) and Texas can choose to do sane things (such as no income tax), but neither state could dictate policy for the entire nation.

This also happens to be the system envisioned by America’s Founding Fathers.

And consider how well federalism works in Switzerland, a nation that doesn’t have a single language, culture, or religion.

Now, perhaps, you’ll understand why I even suggested federalism as a solution to the mess in Ukraine.

P.S. If California actually chooses to move forward with secession, the good news is that we already have a template (albeit satirical) for a national divorce in the United States.

P.P.S. Here’s an interesting historical footnote. There’s a small part of Germany that is entirely surrounded by Switzerland. This enclave wanted to become part of Switzerland many decades ago, but there was no right of secession notwithstanding overwhelming sentiment for a shift of nationality.


A whopping 96 percent of the inhabitants voted for annexation by Switzerland. The people had spoken loud and clear, but their voices were ignored. As the Swiss were unable to offer Germany any suitable territory in exchange, the deal was off. Büsingen would remain, somewhat reluctantly, German.

Since Germany is a reasonably well-run nation, I guess we shouldn’t feel too sorry for the people of Büsingen (unlike, say, the residents of Menton and Roquebrune in France, who used to be part of a tax haven but now are part of a tax hell).

(Editor's Note: There's a picture here I can't reproduce for some reason so go to the original for that.  RK)

And here’s another Hitler parody to add to our collection.

And here’s Michelle Obama feeling sad about what’s about to happen.

P.P.P.P.S. We also have some unintentional humor. When Trump prevailed, Paul Krugman couldn’t resist making a prediction of economic doom. 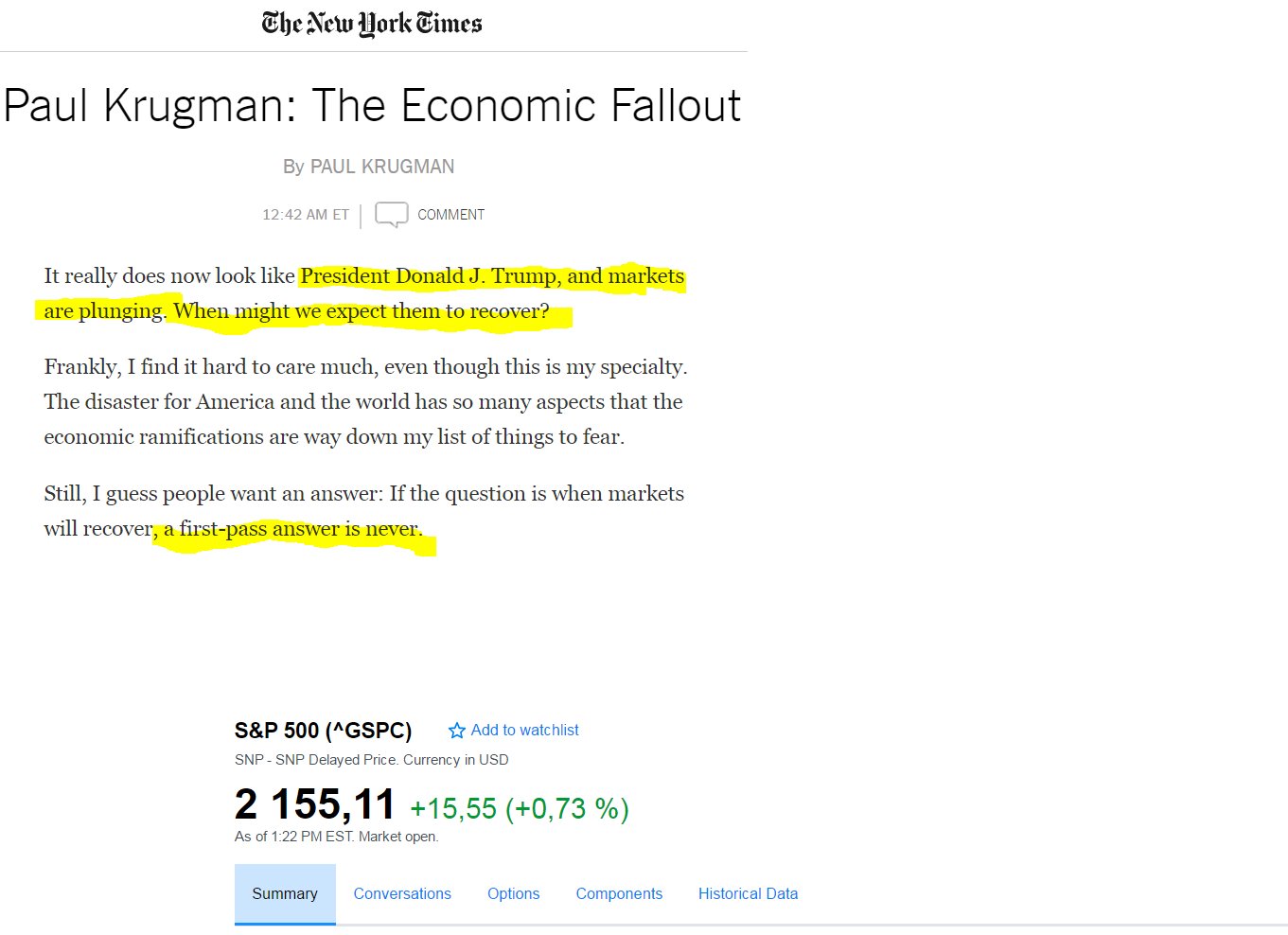 Since markets have since climbed to record highs, Krugman’s forecasting ability may be even worse than all the hacks who predicted Brexit would result in economic calamity for the United Kingdom.
Posted by Rich Kozlovich at 1:27 AM