If you look closely at this map you will see Trump's support was massive. 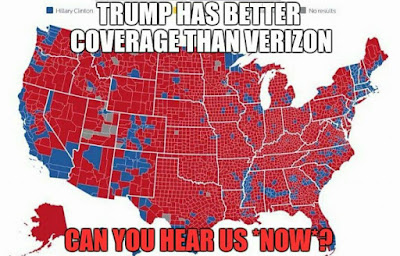 In Ohio there were only five counties that went to Hillary. Cuyahoga County with Cleveland, Summit County with Akron and Canton, Franklin County with Columbus, Hamilton with Cincinnati and Athens county with two large universities. The other 83 counties voted for Trump and you see this same pattern over most of the nation. There are some interesting differences though. Maine and Vermont are "joined at the hip", and a large part of New England share a border with a nation that has an almost ingrained resentment of the United States - Canada - and since the people living in those areas cross back and forth over the border, even though you now need a passport, Canadians have a major influence on New England thinking when it comes to social concepts.


When someone asked why New England is so liberal Alan Cohen answered in this manner:


"New England is the home of a multitude of Universities; and we aren't just talking about your run of the mill University, but an inordinate number of the best schools in the United States. Schools whose 2nd tier is more impressive that the 1st tier in most of the US. Tufts, Brandies, Brown, Smith and many others. And they make a difference because they are in a geographically condensed area with a relatively small population. This isn't a case where the "college town" is liberal in a state that is not. This is a case where the entirety of New England is the college town."


"This is the place where a gay man was elected Bishop in the Episcopal Church. (Gene Robinson may be a one off election) The main line churches are much more secular than what you will find anywhere else. I seriously doubt that many New Englanders are attracted to the religious extreme."


Okay, so electing a gay bishop isn't extreme view in "Christianity'? Really? Only in the fever swamps of leftism.


At any rate, initially I thought voter fraud would be so massive he would have to take 75% of the vote to win, and I'm not so sure he didn't get close to that. Let me outline what I think what happened.


First - did voter fraud play are role in the election? Of course. The Democrats have been pushing that barrier for over 20 years and getting away with it, which makes them push even farther - and even openly working to get illegal aliens to vote. But I'm not sure it went as far this election as I expected because Trump shined a great big spotlight on this growing problem, and a lot of states started to take this seriously. Perhaps that made some afraid.


Secondly - I'm not sure a lot of Democrats who voted for every Democratic candidate since FDR voted at all for the next president. Hillary wasn't really popular at the real backbone of the party faithful. The working class who've been hurt comically from Democratic initiatives, especially their environmental policies. They either voted for Trump or didn't vote.


Yesterday a woman in her early sixties - a perfect stranger - smiled at me as we passed in one of the aisles at the grocery store and said - are you happy about the election? She was thrilled and went on quite a bit about it. Then another man - around my age (I'm 70) approached me at the deli counter and was delighted saying they're nothing but a bunch of tree huggers. How I became the focus of their attention over this is puzzling, but maybe it was because I wasn't walking around in sack cloth and ashes.....as was so obvious in others. But in my 70 years I don't think I've seen this kind of passion in a presidential election - ever!


Third - I wonder at another core Democratic group, Jews. I have a number of Jewish customers who are ardent liberal democrats, and in those neighborhoods there was something I've never seen in a presidential election. Almost no Hillary signs!


In 2008 every neighborhood had tons of Obama signs. In 2012 that number seemed to drop by half. As one of my customers told me she's a conservative in her mind but a liberal in her heart, but I'm sure of one thing. They can't bring themselves to vote for a Republican! But the real question is this - could they bring themselves to vote for Hillary? I think a significant minority of Jewish voters just didn't vote. And I think that pattern ran through the nation with blacks and many Hispanics. What I found surprising is how many counties in the old Confederacy went to Hillary.


In the meanwhile the leftists are going insane, "organized whinefests, flag burning, death threats and property destruction are the order of the day as the Left shows us all what the moral high ground looks like." "The talking heads who for the past year and a half have been assuring us the next president would be Hillary Clinton are just beside themselves. They can’t fathom why reality did not bend to their fantasies."

"Rachel Maddow practically suffered a psychotic break on live TV." "The bee swarm of leftist blogs and wannabe news outlets were even more aghast. The Huffing-and-Puffington Post", which for most of the campaign has run an editor’s note on every “news” story saying how evil Trump is, went full-on Scarlett O’Hara, blaming all the misogynist white conservative males for not electing the “obvious” choice, Hillary, for president. The headline was pure, 3-year-old drama queen: “America Elected A Man Who Said ‘Grab Them By The P***y’ Over The First Female President.”


And they wonder why the nation rejects their candidates. If anything more clearly outlines the difference between leftists and conservatives this is it. If anything convinces Trump supporters they were right - this is it - and I include those core Democrats who didn't vote, because a non-vote for Hillary was a de-facto vote for Trump. Violence is the handmaiden of the left.

The very groups who decried the idea Trump wouldn't accept the results of the election are now demanding the world reject the election by destroying other people's property, and leftist leaders and the main stream media bear a large share of responsibility for this outrage.


One teacher asks: Where were the riots by conservatives when Obama was elected? Where were the protests and vile comments on signs? She goes on to say:


"for God's sake, some of you need to get a job. You have way too much time on your hands. And take a course in government that is not taught by some liberal. If you can't find one, let me know I taught government along with History for 26 of my 32 years and I will happily explain the electoral college and why."


"Along with millions of others I have suffered through 8 long years of Obama. No one wanted a third term of Obama by electing another Clinton. I'm tired, desperately seeking a good night's sleep which I have not had in months, and not having to read or listen to any more rhetoric about your feelings."


"If you could only see yourself as millions of others see you. Well maybe that is not a good idea, you might just curl up in a fetal position and whine some more."

This election will reverberate around the world. First there was Brexit, and now Trump, next Europe will see major changes in the political leadership in Germany, France, and all of the EU.

We need to understand this - nothing will be the same in either party because of Trump.  There's a civil war within the Republican party that's not going away.  The leadership calls for harmony between factions - that's not going to happen.  Those who worked to elect Trump did so as a total rejection of the Republican leadership - not the party - the leadership! They think they're the party, and now they are, and they're not going to allow Karl Rove, Mitch McConnell, Paul Ryan and their allies to strip that control away without a fight, including the next primary election in the midterm for seats in the House and Senate.

As for Democrats - they don't have a clue who and what they are. John Goodman askes: What Does it Mean to Be a Democrat?

He goes on to report: " The majority of Democrats and Democratic primary voters are self-described moderates or even conservatives, according to an Upshot analysis of Pew survey data from 2014 and exit polls from the 2008 Democratic primary."

"Some of these self-described moderates hold fairly liberal views. But the “mostly liberal” Democrats barely outnumber Democrats with “mixed” or conservative policy views, according to the Pew data, which classified respondents based on how consistently they agreed with Democratic policy positions. Only about a quarter of Democratic-leaners hold the consistently liberal views that would potentially put them to the left of Mrs. Clinton." ......There is a potential rupture within the Democratic Party that has been largely ignored by the pundits.  Nothing is going to be the same.

In the picture of the map it asks a question.  Can you hear us now?  We'll see!
Posted by Rich Kozlovich at 6:40 AM