Observations From the Back Row: A Generation of Spoiled Brats

Pamela Adams posted this article: The Left has Failed a Generation: the Perpetually Victimized Can’t be Heroes on November 13, 2016 saying:

"Hardship creates heroes, not safe spaces.   Determination forges heroes, not participation trophies. They seize every opportunity, taking charge even when all the circumstances are against them. Edward was the perfect example of just such a hero.  Edward “Eddie” Reichenbacker was born on October 8, 1890, in Columbus, Ohio.  He quit school at age 12 when his father died.  The third of eight children, Eddie assumed the responsibility of supporting his family. When World War I broke out, the nation already knew “Fast Eddie” as a skilled race car driver for General Motors. He also sold their cars.  When America entered the war in 1917, his fame took second place to his patriotism. Eddie was among the first to enlist.".......he wrote in his diary:


“I shall never ask any pilot to go on a mission that I won’t go on. I must work now harder than I did before.”

He resigned as Chairman of the Board of Eastern Airlines in December 31, 1963.  In his resignation letter  Rickenbacker declared:


“I am going to expand my crusade to save the American way of life for future generations, as I want our children, our grandchildren, and those who follow them to enjoy the American opportunities which have been mine for 73 years.”

Pamela Adams goes on to say:

Eddie Rickenbacker was a hero, but he wasn't alone. He came from a generation of heroes.  Men who worked hard, got married, had children, raised them with the traditional Judaic/Christian values that made America great - teaching them to become the same kind of responsible citizens they were.

We've been contaminated with leftist thinking regarding what's right, what's wrong and what needs to be done about it. When the baby boomers were growing up we had people like Dr. Benjamin Spock undermining parental confidence with their psychobabble on how to raise children....without punishment....and what did we get?  Temper tantrums from spoiled brats demanding to have their way. And the universities play into this. 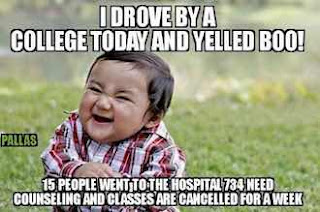 "What would all of these poor sad shocked young Democrats have done had tens of thousands of us older more conservative and responsible adults, left our jobs and marched through the streets in protest over Barack Obama’s win in 2008 or 2012? I’m sure they would have called us poor losers and told us to get over it.

No one coddled to our disappointment nor did any of our bosses give us any special or preferential treatment because we were disappointed. I don’t recall hearing anything about councilors being made available to all of us who were so heartbroken when Obama won."

The Yale economics professor sent an email to students telling them he was making exams optional because these snowflakes were in shock....shock mind you.....so much shock they feared for their families and apparently were incapable of taking tests.   Does anyone see any Eddie Rickenbacker's in this group?


“Today during my office hours, 4PM to 7PM, I will be bringing my personal coloring books, crayons, markers and colored pencils for anyone to use in order to de-stress and relax from the election results.”  “Please do not hesitate to reach for help, whether it is to me, the rest of the Community Advisor and Residential Life University Apartment staff, the Counseling Center, the Helping Center, your friends and family or your professors. None of you are alone.”


Coloring books, crayons, markers and colored pencils.....is this woman serious?  Is this woman a lunatic?  She informs these poor whimpering puppies they're not alone.  No, they're surrounded by and supported by idiots turning men and women into cringing, whining, unthinking myrmidons of the left.

Tufts University offered arts and crafts, University of Kansas made 'therapy dogs' available n every other Wednesday, University of Michigan offered group grief discussions with Play-Doh and coloring books, and Cornell offered chalk and hot chocolate to help them get over their disappointment.

What happens when they graduate and they're still on pacifiers?  Having disappoints in life, getting over them and moving forward is what life is all about.  In the real world life is about pain and suffering and how well you overcome it will determine how much happiness one has in life.

These snowflakes are supposed to be tomorrow's leaders and yet they don't have a clue on how life works outside their books and their pandering blithering idiot leftist professors - who never had a real job, never created a business and never provided employment for anyone....except maybe their teaching assistants so they wouldn't have to do the job they're being paid far more money than they deserve.

Can you picture these babies having to deal with Putin and finding it so difficult they decide to follow the teachings of their professors and sit down in a circle with coloring books "because everything else is just too hard right now!”

Robert M. Cain commented: “Something I’d expect to see outside a preschool after the class hamster just died.”

I've often said I wonder if the real heroes of the invasion of Normandy would have landed if they knew this is what they were going to make the ultimate sacrifice for.  They probably would have because that was an age of heroes, raised by the previous generation of heroes.

And what are we seeing in the streets now....temper tantrums by spoiled brats because that's how they got their way with mommy and daddy.

People have said these leftist rioters - these aren't demonstrations, they're riots - have lost their minds....wrong!  They haven't lost their minds they're revealing them.   "Young liberals have been flooding the streets of America’s big cities crying, pleading for “safe spaces,” kvetching, and whining about President Elect Donald Trump. And if that was all it was, it would be a bad enough sign that the left so hates our system that they don’t want to accept the results of an election simply because it didn’t go their way."

These people are anarchists, even attacking the police.   Liberal fascism raises it's ugly head we should be grateful because even many liberals must now see just where these people's minds and hearts really are.   The only real moral foundation of the left is acquire power in any way possible, and if they have to be violent to get it - they'll do it.  From the French Revolution until today - that's who  leftists really are.

The French overthrew the abusive French aristocracy and became worse than those they overthrew with what became known as "The Terror", beheading thousands for no crime other than being a part of the nobility, clergy or just being accused of not supporting the revolution.  Eventually this insanity became so out of control some of those who instituted this "Terror", like Robespierre, were themselves beheaded.

And these "snowflakes" are afraid of Trump.  They should be more afraid of themselves, and what they bring to the future.

One more thing.  This is a good time to stop funding "higher education".  Stop the burden of student loans....because they're to hard to pay back....stop any public funding of universities and make them all for profit universities.  That will drop the cost of higher education and end the strangle hold leftists have on these universities.  Will some go out of business?  Sure!  And good riddance.  Those left will only be offering legitimate "higher" education that prepares young people for the real world, and not leftist nonsense that's failed everywhere it was tried in the world.

One more one more thing.  Perhaps these whinebabies would like a nice vacation to Venezuela.  That way they can see just how wonderfully leftists can institute starvation, stagnation, rot, ruin and a complete abrogation of human rights.
Posted by Rich Kozlovich at 5:43 AM