I don't watch much television news these days, but I've been to a conference a few days and watched as much of Fox News as I could stand.  Not that they were saying anything I was so much opposed to as the repetitious exposure of the unending clabber by Pelosi, Nadler and others.

If you listened to their nonsense you couldn't possibly come away with any other impression than Trump is deserving of impeachment because he's guilty of picking his nose incorrectly. And doing so with great solemnity.  Let's face it folks. When you're looking for an excuse any one will do.

The picture below appeared in the article, BARR: House Democrat Impeachment Rules Are Made For A Lynch Mob, Not A Legitimate Proceeding.  Great picture! How appropriate is it that Shelia Jackson Lee, is standing next of Nadler, both of whom are members of the Club For the Galacticly Stupid!

No matter what Pelosi, Schiff or Nadler keep saying - I've maintained for some time there will be no impeachment vote in the House of Representatives, and I'm more convinced than ever.

It's become clear the Democrats in charge of all of this have committed federal crimes, and I still maintain the Senate needs to form a committee to investigate, or at the very least, demand the Justice Department investigate and question Schiff, Nadler and their staffs under oath.

But either way - I firmly believe if they bring an impeachment vote do the House it will fail. If they do, and it fails, they're done.

I think Pelosi has to know that, but no matter what's being said: I don't really believe Pelosi is in control.  She's being controlled by the farthest of the far left in her party.  She's afraid of losing the Speakership if she doesn't cater to the Gang of Four and their supporters . 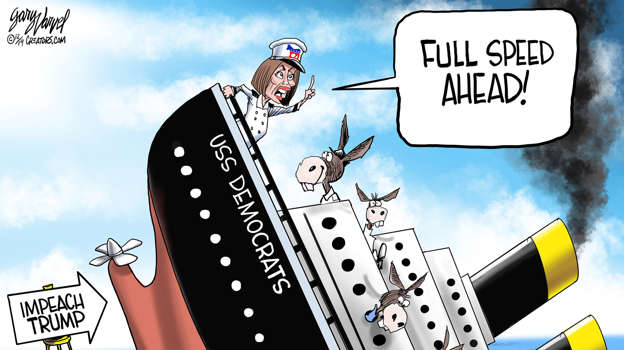 Derek Hunter calls them arrogant, ignorant, and having achieved the status of, “weapon-grade stupid”.

These are people Pelosi is afraid of.  People who've strung "together an uninterrupted string of gaffes, stupid statements, and racist comments that would humiliate your average teenager. But what they possess individually is nothing compared what happens when they come together, they manage the mathematical impossibility of a collective IQ drop."

Pelosi will go down with that ship for her lack of courage and leadership, but if we take a look at all the ridiculous things Pelosi has said over the years, it's pretty much clear, she's not the brightest pebble in the brook. She's shrewd, calculating and vindictive, but bright?  That's a light bulb that went out decades ago, if it was even turned on.

Right now, the impeachment scam is all they have to obscure just how screwed up the Democrats are with these loser candidates, AKA, loser human beings, running for POTUS.

Kamala whines she has to drop out because she's not a billionaire, implying the people would vote for her if she just had enough money. Petey is practically toe licking the black leadership and they still don't like him, and without a huge black vote, no Democrat can get elected. As for the rest; does it really matter?  But Trump has a 30% plus approval rating among blacks.

Here’s a recent poll: Biden leads with 29%, Sanders, 20% and Warren 15%. It appears Warren is so looney she’s less desirably than an insane old commie and a dumb bumbler. As for the bottom ten candidates; they can’t poll 35% between them.

Without Soros, the Hollywood crowd, and their ilk among the guilty rich, the Democrats wouldn't have enough money to spend on the election to buy coffee and donuts for the staff. Those who are professional staff people expect to be paid, a lot, or typically they jump ship and attempt to get on board with the winningest candidate. How many do you think will stick around when the paychecks stop? So, that leaves unpaid volunteer help, so maybe they could afford coffee.

But will they be able to afford a campaign?

I also believe there will be a brokered convention and in spite of the views of some of my friends, I don't believe Hillary or Michelle will be the dark horse candidate. I'm inclined to think Schumer, or someone of his ilk, would be chosen. If Schumer is chosen, that will continue to discombobulate the Democrats as they're clearly the biggest antisemitic movement in the United States now. But Schumer is only a Jew when he’s running for the Senate in his state. If he runs for President, he will expose himself as another contemptable self hating Jew, like Bernie Sanders.

Finally, the election of Trump will be one of the most, if not the most, lopsided election land slide victories in the history of the nation. The House and the Senate will both be controlled by Republicans and more swamp creatures will be eliminated from the Republican party, the deep state swamp creatures in government will be exposed and fired, from both parties, and the power of the federal government will come down on all these criminal activities of the Democrats, going back to the beginning of the start of the Obama administration, and up to and including the corruption of the impeachment scandal.

If there is an impeachment vote, it will be a sort of October surprise action on the part of the Democrats, as an act of desperation believing that will turn the election. If they do that, the outcome will be even more lopsided, and from that point on the Democrat party will become another meaningless communist mouthpiece.

Now, to what I think is the question to ask: Will there be a third party made up of moderate left Democrats and Republicans? We must remember the Republican party was never a conservative party philosophically, going back to the days of Teddy Roosevelt.  All progressives, just as left as was Woodrow Wilson, both of whom believed the Constitution was an impediment to human progress.

The leftist Rockefeller Republicans were the dominant force in the party right up to and including the election of Trump. There’s a reason why formerly perceived conservatives, like George Will and his fellow “never Trumpers”, have abandoned the Republican party. So, in order for these insidious characters to continue to be relevant, I actually see that as a potential, as that seems to be to be the only potential for any form of relevancy for both of these groups in each party.

There will be no bi-partisanship in any form. Now that truth is rising to the top each segment of society represented by these organizations can recognize the other is absolutely an enemy to their vision, and must be defeated. It’s taken the right longer to accept that, but the violent actions of Antifa and others have driven home that reality.

Jonathan Turley, a Democrat who voted for Obama, and apparently doesn't like Trump, honestly testified there was no legal impeachment issue here. What happened? Leftist lunatics found out where he lives and threatened his life. There can be no deviation from the leftist narrative, no matter how insane it is.

I love Antifa, Black Lives Matter, Occupy Wall Street, and all the other insane groups supporting the Democrat party. They expose the left, and the Democrat party, for who and what they are. They’re gifts that keep on giving. Those are the fascists.

Its winner take all, and no matter what’s being said – I love it. I like it where everyone knows where everyone stands and are willing to battle for what they believe, that way truth emerges to the surface so that even the non-reading public can see it.

Posted by Rich Kozlovich at 2:10 PM