Feel the Bern? Venezuela is a Socialist Hell.

Of course, Venezuela is just the latest example of socialism’s failure. Despite the lure of "fairness" and "economic security" and "taking on the rich" — sound familiar? — every socialist country ends up in the same desperate ditch.

Venezuela is such a painfully obvious example of the disgusting imperfection socialists impose on humanity.  All the while unendingly demanding perfection from capitalists.

Venezuela is a "hell hole", one they brought on themselves. The country has tuned into a huge criminal enterprise, with the government as the primary criminal. How to fix it? If they overthrew this corrupt band of thieves today, it would take decades and hundreds of billions, if not trillions of dollars to bring their economy back, feed their population, repair their infrastructure, and just reasonably restore the health care system. But it will take decades to overcome the impact starvation will have had on the children.

These are their formative years physically and mentally, and impairment of their development caused by starvation is incalculable. And the impact of those impairments will last for the rest of their lives. That will impact the nation's efforts to heal itself, if they ever get the chance.

Can Bernie explain that? This is what he would love it impose on America, along with the rest of the leftist lunatics running for the Democratic nomination for President of the United States.

Biden want to put policies into place that will destroy hundreds of thousand of jobs imposing the New Green Deal on America.

It's a law that criminalizes behavior before that behavior became illegal.  To do so would directly violate the Constitution, which contains "two clauses in the constitution prohibit ex post facto. Article 1 Section 9 of the U.S. Constitution states: 'No Bill of Attainder or Ex Post Facto Law shall be passed,' which follows the rational thinking that if there's no law, there's no crime.

To change that is to give carte blanche to radicals to put anyone in jail for anything, whenever it pleases them. It's really called tyranny, and one of the factors triggering the American Revolution.

Bernie and his crowd of would be tyrants want to directly violate the Constitution which prevent ex post facto laws. 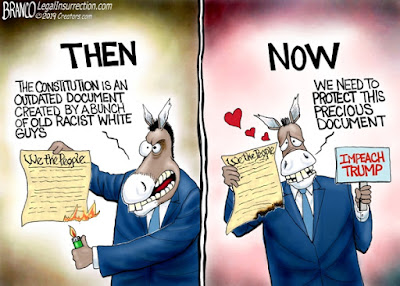 Make no mistake about this:  The only time socialists love the Constitution is when they can use it against conservatives.  The rest of the time they hate it and want to destroy it by using our own values against us. Horowitz is completely right when he says:


Inside every liberal is a totalitarian screaming to get out.

By the way, this is so profound you would think it would be published everywhere.  Try to find that article by Googling it. If I hadn't already seen it and knew where to look it wouldn't have been able to find it as it never appeared on any of the three search engines I use.

Then there's Elizabeth Warren who believes trillions of dollars in tax hikes is good for America.  Not to mention her fifty trillion plus cost for universal health care.  I would like for her to name one country in the history of the world where such an action proved economically positive.

(Editor's Note: You may wish to view my files on Taxes, and Warren figures prominently in those files. RK)

In Dan Mitchell's article, The Real Motive for Class-Warfare Taxation he states:

In addition to being a contest over expanding the burden of government spending, the Democratic primary also is a contest to see who wants the biggest tax increases. Bernie Sanders and Elizabeth Warren have made class-warfare taxation an integral part of their campaigns, but even some of the supposedly reasonable Democrats are pushing big increases in tax rates.

Taxes are about control, not about economic growth or freedom.  We really do need to get that, and these are the top three loons running for the Democrat nomination for President of the United States. The rest are even loonier.

Maybe they should get some ball caps with MAV on them for their campaigns. MAGA worked for Trump, maybe MAV will work for the Democrats?

Nah, I wouldn't make book on that.
Posted by Rich Kozlovich at 5:48 AM