Impeachment and the Media's Corruption

The media has been taking a big hit with the public over their blatantly corrupt coverage of Trump, the Democrats and the entire impeachment process.  As one cartoon demonstrated: 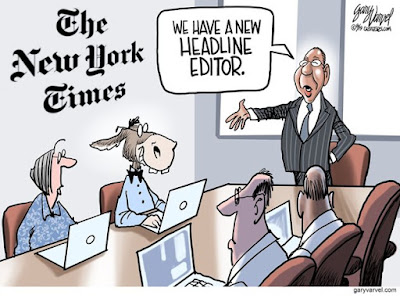 When the media finely starts to come clean and recognize how corrupt their "profession" has become, we should have no doubt, thanks to the "Alternative Media", the public is already there, and totally aware.   If it wasn't for the Internet this would have turned out substantially different.


"Few are the establishment journalists willing to tell the truth about their profession, which largely has abandoned its commitment to objectivity in the cause of opposing President Trump and, if possible, driving him from office."

"One brave soul with standing in the profession just did so. Dennis Byrne, who for decades was a columnist for the Chicago Tribune and Chicago Sun-Times and now is retired, has published a remarkable call for journalists to regain their sanity. The title of his column, published on his blog,   The Barbershop, tells the story: “As a one-time journalist, I'm deeply ashamed of today's media.” "I once was a journalist and proud of my profession. No longer. Today's media are habitually violating what once were the profession's governing principles: that the news must be reported objectively, fairly and without bias."............What lends creditability is that Byrne is no fan of the 45th president."

In reality there are few in any profession who are willing to be rocks in the current. I'm continually disturbed at the "go along to get along" attitude of so many in leadership positions in my own industry, and especially those scientists and those with advanced degrees who are part of my industry. All unwilling to stand up and say: "You're all wrong and I'm going to tell you why!"

However, this is changing in the media, and hopefully in far more arenas than just journalism. Take J.B. Shurk who wants to make journalism "Great Again" saying:


A new year is upon us, and I am keenly aware of the Fourth Estate’s four New Year’s Resolutions for 2020: (1) get Trump; (2) get Trump’s friends and family; (3) ridicule anyone who has voted or would consider voting for Trump; and (4) protect the Democratic Party from scandal. If the “free” press can do this while impersonating the virtuous hero withstanding onslaught from the impenitent pretender in the White House, then all the better............Chris Wallace has gone so far as to claim that there has never been a more dangerous time for the First Amendment than when the President of the United States exercises his free speech.

Shurk goes on to explain:


If the ones with journalism degrees did some investigative reporting, they’d discover that we backcountry folk simply find their prose unconvincing.......The coasts are fond of telling us that “democracy dies in darkness.”  Here in the Great Middle, though, we have long known the more important truth: “Give light, and the darkness will disappear of itself.”

But what's really interesting is when a left wing organ like the Washington Post criticizes someone who has become the Icon of left wing news reporting, Rachel Maddow.

Once again Thomas Lifson points out how:


Washington Post media critic Erik Wemple chronicles top-rated MSNBC host Rachel Maddow’s continual hyping of the Steele dossier............While Maddow used media reports to base her assertions on, those media reports were often the result of illegal leaks coming from the likes of Comey and Strzok. Sundance at The Conservative Treehouse thoroughly explores this cycle of mutual back-scratching between the deep state and the media. But he also highlights Maddow’s disgraceful reaction when the Horowitz report debunked the Steele dossier:...............

The tide is changing, and we can thank the Alternative Media for that, and this turning of the time may end up destroying many careers.  And rightly so.

Most of you won't remember or simply don't know who Walter Winchel was, but in the 40's and 50's he was a major force in "journalism".  In his case he had no concerns about "news" and "truth".  Muckraking, innuendo and allegations for which there was no evidence was his style.

He loved destroying people, vindictively calling those who offended him communists, which was a serious charge in those days.  All done in spite of the fact he had not one iota of evidence in so many cases.

While his radio show was impressive, that same format on television demonstrated just what phony he really was.  Once the public saw who and what he was his career steadily declined.

This disgraceful impeachment charade has made the public aware of how corrupt journalism has become. They're playing the same kind corrupt muckraking yellow journalism game as did Walter Winchell, and that will come back to haunt them.