A Close Look at Adam Schiff

What political goals does this powerful Democrat congressman really have?


Fifty-nine-year-old Democrat congressman Adam Schiff became famous in recent months for presiding over the Trump impeachment hearings in the House Intelligence Committee. Let us take a close look at exactly who Schiff is, and what his political agendas are. A Harvard-trained lawyer, Schiff launched his political career in 1996 when he was elected to the California State Senate, where he served as chairman of the Judiciary Committee.  In 1997 Schiff received a Henry Toll Fellowship for “leadership development.” Sponsored by the Council of State Governments, this award has long been heavily financed by the billionaire philanthropist George Soros and his Open Society Foundations............In no way can Adam Schiff be described as a “liberal.” He is a hard-core leftist who seeks to fundamentally transform America, much like President Obama so candidly sought to do...............To Read More.... 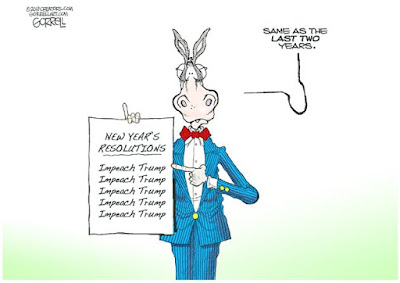 My Take - As you read this man's bio you can't possibly come away with any other conclusion than this man hates everything the Constitution stands for. His radical views, actions and associations are unbelievealbe, including support for outright anti-Semites. It should be clear to the most casual observer he hates this nation, just as much as does George Soros.

And the Democrat leadership is screaming about a "full and fair" impeachment.

How about a "full and fair" exposure of Adam Schiff by the media?  Can you imagine what they would've done if this was Trump's bio?  Yet they've totally ignored this man's intellectual and philosophical past.

Posted by Rich Kozlovich at 6:04 AM