My argument was based on the fact the European Union was a slowly sinking ship, both because of grim demographics and bad public policy. 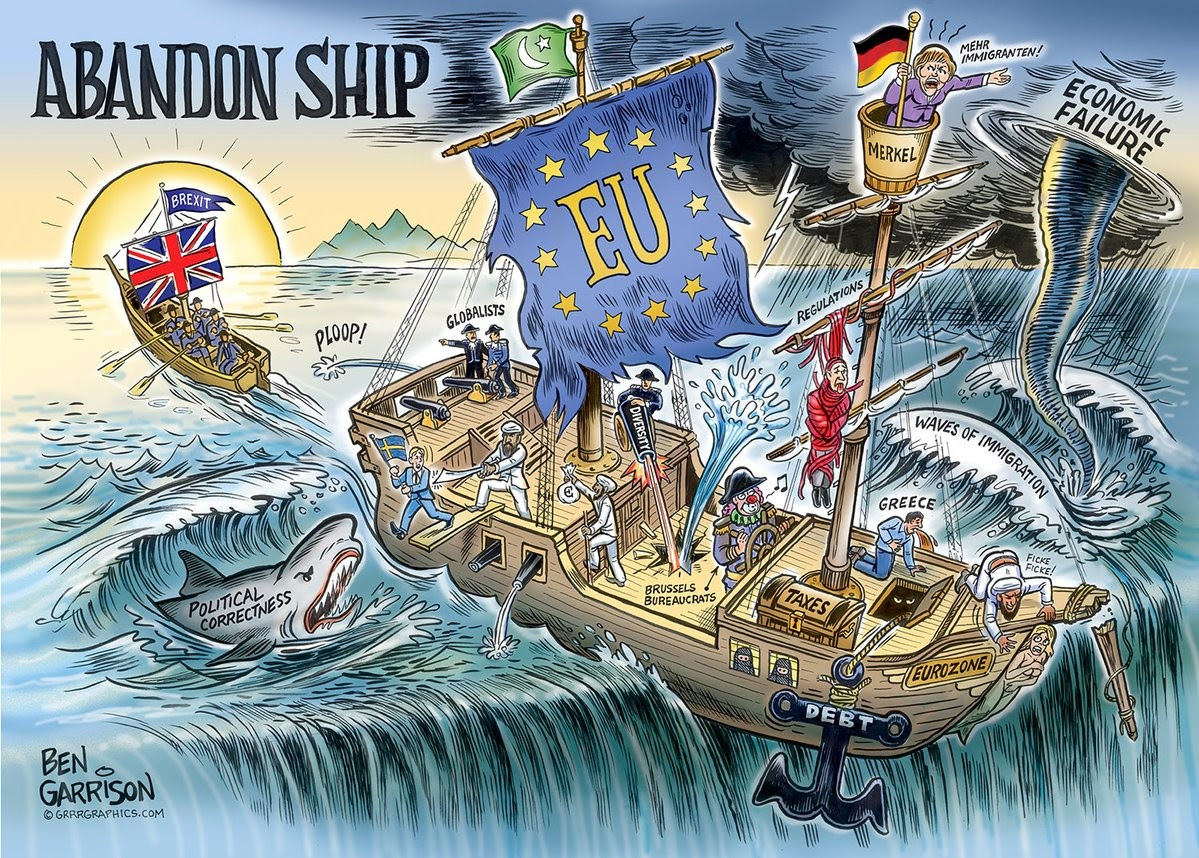 Getting in a lifeboat can be unnerving, but Brexit was – and still is – better than the alternative of continued E.U. membership.

But not everyone shared my perspective.

The BBC reported that year that Brexit would produce terrible consequences according to the International Monetary Fund.

Christine Lagarde said she had “not seen anything that’s positive” about Brexit and warned that it could “lead to a technical recession”. …The IMF said in a report on the UK economy that a leave vote could have a “negative and substantial effect”. It has previously said that such an outcome could lead to “severe regional and global damage”. The Fund said a Brexit vote would result in a “protracted period of heightened uncertainty” and could result in a sharp rise in interest rates, cause volatility on financial markets and damage London’s status as a global financial centre.

Yet none of these bad predictions were accurate.

Not right away and not in the three years since U.K. voters opted for independence.

Not that we should be surprised. The IMF has a very bad track record on economic forecasting. And the forecasts are probably especially inaccurate when the bureaucrats, given the organization’s statist bias, are trying to influence the outcome (the IMF was part of “Project Fear”).

But a history of bias and inaccuracy hasn’t stopped the IMF from continuing to interfere with British politics. Here are some excerpts from a story earlier this week.

Boris Johnson has been warned that a No Deal Brexit is one of the biggest risks facing the global economy. In a broadside against the new Prime Minister’s ‘do or die’ pledge to leave the European Union at the end of October with or without a deal, the International Monetary Fund said a chaotic departure could cause havoc across the world. …No Deal is one of the gravest threats to international economic performance, the IMF said. …Eurosceptics have long criticised the IMF for anti-Brexit rhetoric and it has been one of the loudest opponents of No Deal, saying in April that it could trigger a lengthy UK recession.

I was both disgusted and upset when I read this story.

Fortunately, I don’t need to do any substantive number crunching because Professor Steve Hanke of Johns Hopkins University has a superb Forbes column on this exact issue.

No sooner than Boris Johnson put his foot over the threshold of 10 Downing Street, the International Monetary Fund (IMF) offered its unsolicited advice… In a preemptive strike, the Philosopher Kings threw cold water on the idea of a no deal, asserting that it would be a disaster. …such meddling is nothing new for the IMF. Indeed, a bipartisan Congressional commission (The International Financial Advisory Commission, known as the Meltzer Commission) concluded in 2000 that the IMF interferes too much in the domestic politics of member countries.

Professor Hanke is perplexed that anyone would listen to IMF bureaucrats given their awful track record.


…the IMF’s ability to…thrive…is quite remarkable in light of the IMF’s performance.

As Harvard University’s Robert Barro put it, the IMF reminds him of Ray Bradbury’s Fahrenheit 451 “in which the fire department’s mission is to start fires.” Barro’s basis for that conclusion is his own extensive research.

His damning evidence finds that: A higher IMF loan participation rate reduces economic growth. IMF lending lowers investment. A greater involvement in IMF programs lowers the level of the rule of law and democracy. And if that’s not bad enough, countries that participate in IMF programs tend to be recidivists. In short, IMF programs don’t provide cures, but create addicts.

This is why I’ve referred to the IMF as the “dumpster fire” of the world economy and also called the bureaucracy the “Dr. Kevorkian” of international economic policy.

By the way, here’s Professor Hanke’s table of the IMF’s main addicts.

I wrote just two weeks ago about the IMF’s multiple bailouts of Pakistan, the net effect of what have been to subsidize bigger government.

The original reason for its creation has completely vanished.


The IMF, which was born in 1944, was designed to provide short-term assistance on the cheap to countries whose currencies were pegged to the U.S. dollar via the Bretton Woods Agreement. …But, in 1971, when President Richard Nixon closed the gold window, the Bretton Woods exchange-rate system collapsed. And, with that, the IMF’s original purpose was swept into the dustbin. However, since then, the IMF has used every rationale under the sun to reinvent itself and expand its scope and scale. …And, in the process of acquiring more power, it has become more political.

Sadly, he is not optimistic about shutting down this destructive – and cossetted – bureaucracy.


The IMF should have been mothballed and put in a museum long ago. After all, its original function was buried in 1971, and its performance in its new endeavors has been less than stellar. But, a museum for the IMF is not in the cards. …About all we can do is realize that the IMF is a political hydra with an agenda to serve the wishes of the political elites who allow it to grow new heads.

P.S. Here’s my explanation of how the U.K. can prosper in a post-Brexit world.

P.P.P.S. If you want Brexit-related humor, click here and here.
Posted by Rich Kozlovich at 4:51 AM