Roseanne Barr described "Barack Obama political guru Valerie Jarrett as a cross between the Muslim Brotherhood and the Planet of the Apes" and got fired for it.

On May 30, 2018 Scott McKay posted an article entitled, A Pox On Both Your Houses stating:


Nobody should be too angry that Roseanne Barr got fired on Monday — but that doesn’t change the fact ABC/Disney is an atrocious company. Plus, various and sundry other items of note. on’t be too shocked at this, but Roseanne Barr said something intolerable and got her highly-rated ABC sitcom canceled before its second season could go into production. The decision to dump her show came within mere hours after the statement.

As for her Muslim Brotherhood connections he stated:


Jarrett’s Muslim Brotherhood connections are less a matter of perception; Judicial Watch revealed it had uncovered documentation to that effect in 2015. 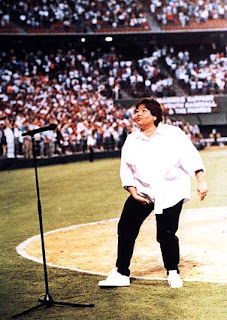 But to compare her to apes is clearly racist, irrational and stunningly stupid.

But remember - this is Roseanne Barr!

Remember when she grabbed her crotch and then spit on the ground after butchering the National Anthem at a ball game?

Her response to the boos?

"I'm sorry that I didn't sing so good, but I'd like to hear him [the President] sing it." Barr also said she would do it all again, "but I'd do it for a hipper crowd. If this is the worst thing they've ever heard, then their lives have been pretty easy."

Remember when she publically claimed she was sexually molested as a child, but one of the other children claimed that was all false. Twenty years later here's her recantation.


While appearing on The Oprah Winfrey Show nearly 20 years later, however, Roseanne said she regretted those accusations. "I think it's the worst thing I've ever done," she said, per Access. "It's the biggest mistake that I've ever made."

"Well, both of those things," the comedian replied. "I was in a very unhappy relationship. I was prescribed numerous psychiatric drugs, incredible mixtures of psychiatric drugs to deal with the fact that I had — and still in some ways have and always will have — some mental illness. And [with] the drugs and the combination of drugs that I was given — which were some strong, strong drugs — I totally lost touch with reality in a big, big way."

So because this lunatic was unhappy and on drugs she could only find solace in vilifying her parents in a way that can't be retracted no matter what is said thereafter?

Why would anyone be shocked or surprised at anything this woman says or does?  She has never had an intimate relationship with reality.  And she bounces back and forth like a tennis ball between sane and insane.

Here are a couple of Rosanne Barr quotes and who I really think she is:
The author went on to say:


It isn’t like Roseanne Barr wasn’t a rickety wagon to begin with. She’s categorically insane and has been for quite some time. What’s more, Roseanne Barr is anything but the middle class conservative icon the promoters of her show’s reboot billed her as in advance of its return to ABC’s lineup of shows this spring. She’s every bit the leftist the rest of Hollywood is; she’s just trashier and less pretentious. That the characters on the show were Trump supporters doesn’t mean much; if anything that fact gave license to the show’s producers to use them as figures of ridicule. Barr has made a career out of portraying herself that way; why Trump supporters would appreciate being identified with one of the least desirable, most lowbrow acts on television is something your author never could understand.

I couldn't agree more.  I didn't see any of this production, and had no intention of watching any future shows, and I'm not bleeding all over myself for Roseanne Barr.  I've always found her contemptible and she's done nothing in her personal or professional life that made me want to change my mind.

McKay goes on to lay out some sound thoughts:


So good riddance to Roseanne Barr and let’s not expend much energy in making a martyr of her in our current culture war.

The real issue here isn't Rosanne Barr, although I doubt she would have been fired if she's said something as obnoxious and stupid about Condolezza Rice, who was treated by leftist media treated in a most disgusting way without anyone being fired.  The real issue is ABC/Disney.  They've gone so far to the left if they were sitting at a table with Bernie Sanders he would have to look to the left to see them.  That's who everyone should be paying attention to, not the firing of Rosanne Barr.

As for Barr - it was just a matter of time before she reverted back to her normal insane self.  Her firing just saved conservatives from a lot of embarrassing future moments.

In this every conservative in the nation can thank ABC/Disney!

Posted by Rich Kozlovich at 1:16 AM