In my research and travels, I come across all sorts of strange stories about tax policy.

While I’m quite amused by these oddball examples, I actually prefer writing about overseas tax policies that provide teachable moments about big issues such as the Laffer Curve, taxes and growth, tax competition, and how higher tax burdens “feed the beast” by enabling more government spending.

Let’s look at some new examples and see what we can learn about politicians and fiscal policy.
We’ll start with a Bloomberg story from the Ukraine, where taxpayers go above and beyond to escape extortionary taxes on foreign vehicles.

Take a close look at the cars crawling through Kiev’s traffic-laden streets and you’ll notice something odd: a surprisingly large number of them aren’t registered in Ukraine. The explanation isn’t a sudden inflow of tourists, but rather a work-around by local drivers who crave foreign-made vehicles and refuse to pay restrictively high import duties to buy them. Instead, schemes have popped up where buyers effectively acquire cars from nearby nations and bring them across the border on temporary arrangements. They must then leave and re-enter Ukraine every year, or sometimes more frequently. “It’s amazing,” said Oleksandr Zadnipryaniy, a 30-year old entrepreneur who paid about $3,000 for a second-hand Opel Vectra from Lithuania. “Taxes are exorbitant. Why must poorer Ukrainians pay three times as much as richer Europeans?”

The answer to Mr. Zadnipryaniy’s question is that they don’t pay the tax. At least not if this chart is any indication. 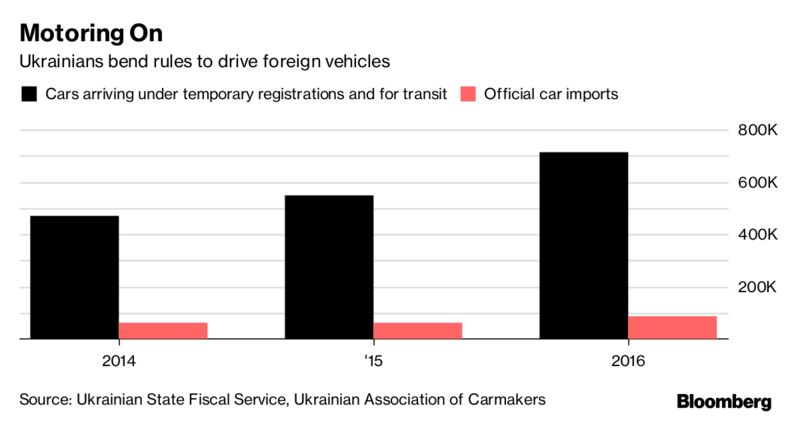 Needless to say, I’m on the side of taxpayers and don’t have sympathy for the politicians, who are motivated by a desire to extract revenue and curry favor with domestic interest groups.


Such cars represent a headache for the government. Dodging import duties trims budget revenue… Cracking down is also tricky. …Drivers blame the government, accusing it of pandering to local car lobbies by setting high import duties.

Now let’s shift to another story about tax avoidance, though this one doesn’t have a happy ending.
The BBC reports that a big tax hike may put an end to “booze cruises” from Finland to Estonia


The Estonian government is set to impose a 70% rise in taxation on alcoholic drinks in July, Finnish broadcaster YLE reports. It’s a blow to drinkers from Finland who, since Estonian independence in 1991, have taken the short 54-mile (87km) ferry trip from Helsinki to Tallinn to enjoy prices which are less than half of those back home. …a 12-euro crate of beer will increase to 18 euros, making the concept of the money-saving “booze cruise” much less inviting.

But fortunately Finns still have an option.


Finnish tourist Erno Sjogren said that the tax rise might make him think again – but not on giving up the concept. Speaking to Helsingin Sanomat as he loaded his car outside an Estonian supermarket, he said he would consider taking his trade to Latvia instead – a 2.5-hour drive cross-country from the ferry port in the Estonian capital. The Latvian town of Ainazi is already benefitting, Helsingen Sanomat says, with the appropriately named SuperAlko store visible from the Estonian border and offering cheaper prices than its Baltic neighbours.

Let’s toast to tax competition!
Last but not least, I’m a giant fan of decentralization and a partial fan of secession (done properly and for good reasons), but you don’t automatically get results.

Consider what’s happening in Scotland, as reported by the U.K.-based Times.


Nicola Sturgeon has given her clearest indication to date that Scots will be in line for substantial income tax rises next year. In an interview due to be published today the first minister dismissed suggestions that a high-tax agenda would deter businesses, arguing instead that paying for good public services could be just as attractive to investors and people as low taxes. Ms Sturgeon’s comments came as the Scottish parliament backed a motion calling for higher taxes to pay for public services.

Ugh. I’m sympathetic to Scottish independence, but stories like this make me pessimistic about what will happen if politicians like Sturgeon are in charge of an independent nation.
Assuming, of course, she’s actually ignorant enough to believe that investors want higher taxes.
And I haven’t written about whether Catalonia should be independent of Spain, but this blurb from the EU Observer leaves a sour taste in my mouth.

Catalonia’s regional government said Monday that increases in staff at the tax office, from 321 to 800, have made the Spanish region ready to collect taxes for an independent Catalonia if citizens vote for independence on 1 October. A law to organise the referendum will be to a vote on Wednesday, but the national government in Madrid has dismissed the bill as a way to “cheat democracy”.

Technically, this won’t be bad news if the 479 new tax bureaucrats replace a similar number (or larger number) of officials that formerly harassed people on behalf of the national government in Madrid.

But I’m automatically suspicious that politicians and bureaucrats will maneuver to be the winners of any change. This isn’t an argument against secession, but it is a warning that independence won’t yield economic benefits if there’s no reduction in the burden of government.

Advocates of an independent Catalonia should first and foremost be making plans to unleash the private sector, to make themselves the Hong Kong or Singapore of Europe.

Assuming, of course, that they would want their new country to be highly ranked by Economic Freedom of the World.
Posted by Rich Kozlovich at 6:51 AM