The sad state of the American worker

Obamanomics has yet to deliver jobs, while many incomes have declined 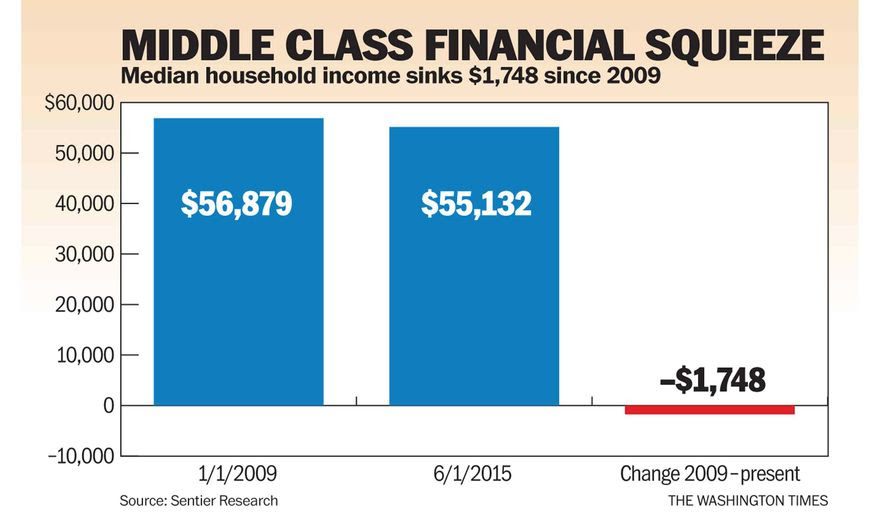 My 22-year-old son lives at home, still depends on his old man for spending money, and my profoundest fear is that like Will Ferrell in the “Wedding Crashers,” he will never leave the nest. I’m not alone. There are some 20 million college grads living at home. A 2014 study reported by CNN Money found that half of kids who are two years out of college rely on their parents to pay some or all of their bills. It’s the new normal for 20-somethings.

Gee, parents sure are getting a great financial return on the $150,000 they’ve shelled out for four years of college.

Sure, some of this dependency is an entitlement mentality of millennials whose parents have given them almost everything they’ve ever wanted. But it also reflects how dismal the economy still is today. Today we have college grads — along with working moms and 60-somethings — flipping burgers at Wendy’s and stocking the aisles at Wal-Mart. Left-wing groups and union leaders are now demanding “a living wage” for jobs that were never intended to be for heads of households. Who’s against higher wages for American workers? But wasn’t this what Obamanomics was supposed to deliver?

Seven years ago, Barack Obama promised a progressive worker paradise — a recovery from recession that would leave no one behind. “Hope and change” would deliver high employment and rising wages, and no one bought into this idyllic vision more than college kids.

President Obama and his supporters proclaim that he has saved America from the second great depression — a message we will start to hear again over and over in the months ahead. But even his own voters don’t believe him anymore, now that we’re just ending the seventh summer of no real recovery.

Start with the jobless rate. Yes, unemployment is down to 5.1 percent officially. Raise your hand if you believe that number is even close to accurate. The real unemployment rate counting labor force quitters and those forced into part-time jobs is, according to Mr. Obama’s own Labor Department: 10.5 percent. That number is actually down from more than 15 percent recently, but these still feel like recession rates. Nearly 90 million Americans over the age of 16 are out of the full-time workforce, and many millions of them are plopped in front of the TV watching “Seinfeld” reruns and living off food stamps or their parents because they have given up looking for a good job.

If we had experienced a normal recovery from recession, we’d have roughly 5 million to 6 million more of these Americans working today. With a Reagan-style recovery, more than 8 million Americans would be working and collecting a paycheck.

The more than 100 million Americans who are working are feeling a financial crunch, too. Most of them haven’t seen a pay raise that keeps pace with inflation for a decade.

The Census Bureau has released the latest data on family income, and it has been analyzed by the statisticians at Sentier Research. Through this past June, the median income family has lost $1,700 in real income since Team Obama took the reins (see chart).

The sad irony is that the steepest declines in income have been suffered by blacks, Hispanics, single women and, of course, those stay-at-home millennials. Oddly enough, these are the Obama voters. They also tend to be concentrated on the lower rungs of the economic ladder. Imagine the scathing indignation and the cries of racism and sexism if this were the record of an incumbent Republican president rather than a liberal Democrat. Call it Mr. Obama’s “war on women.”

Here’s yet another bitter irony of this president’s labor policies. Mr. Obama obsesses over income inequality — almost as fanatically as he does climate change. But the standard measure of income inequality — the so-called Gini Coefficient — shows a wider gap between rich and poor than during the George W. Bush years. Using his own metrics, Obamanomics is a dismal failure.

The progressives think that the best way to drive up wages is to smack down businesses as greedy, self-serving and corrupt. But you need an employer before you can have an employee. Sorry, to be anti-business and pro-labor is like being anti-chicken and pro-egg. When Hillary Rodham Clinton said earlier this year that “businesses don’t create jobs,” she didn’t misspeak, she was expressing a profound ignorance of how the private sector hiring machine works. Donald Trump said it well: As a businessman, “if I have more money, I can hire more workers.”

The employment recession didn’t start with Mr. Obama but with George W. Bush. Voters are distrustful of both parties and justifiably so. Even the simplest reforms — like building pipelines, cutting the corporate tax rate, letting banks lend money to businesses and homebuyers, or requiring work for able-bodied welfare recipients — don’t get done. But this past week, the president was up in the Arctic lecturing us about climate change. The unemployed probably feel that if he relishes cold weather so much, he should stay there.

For all of these reasons, this year, Labor Day should be renamed Labor Pains Day.

• Stephen Moore is a Fox News contributor and an economics consultant to Freedom Works.
Posted by Rich Kozlovich at 9:45 AM