Observations From the Back Row: The Gorsuch Hearings 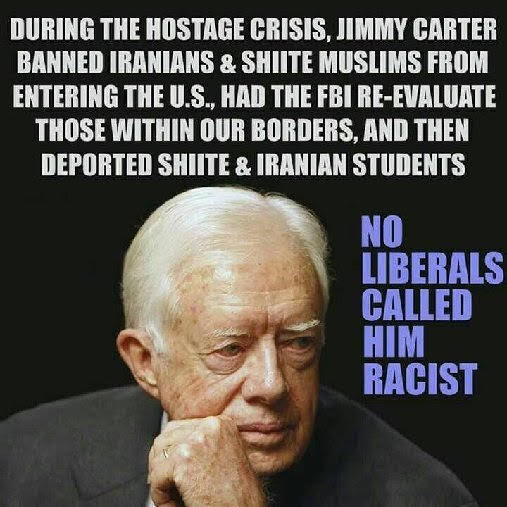 Yesterday I caught as much of the Gorsuch hearing I could stand. Watching Senator Patrick Leahy gives me hives...so I moved on.

At any rate he continually demanded do know if Gorsuch thought religion should be a determining factor in immigration.

Gorsuch kept saying that was already covered by the first amendment. Well, they were both being cute. The first amendment covers the rights of American citizens to practice the religion of their choice.

Being allowed to immigrate is not a right - it's a privilege - and that decision belongs to the President of the United States. He can ban anyone for any reason - that's the law no matter what any judge says - and Jimmy Carter did it.

There are times I wish I had the opportunity to answer the questions for these people. Here would have been my answer:


Well Senator, let's say there was a resurgence of Baal worship in the Middle East, which required the sacrifice of babies.  Would the left think they should be allowed here to practice their religion?  Oh....wait.....we already have them here.   We call them progressives, or liberals , and they call their demented practises rights.

Then there were the Thuggees – the Cult Assassins of India, who practiced ritual murder for centuries in India.  A practice that didn't stop until the British found out about them in the 1800's, then executed, expelled or imprisoned all of them.  If such a group re-surged and wanted to come to America would that be acceptable?

So do I believe religion should be a determining factor in immigration?

Well, if a religious movement's primary laws require violence against other religions or groups with whom they disagree, including those who are members of a different sect of the same religion because they believe they're heretics deserving of death - then they need to be kept out and any already here need to be sent back.  And that religion is called Islam.

Let's try and get this once and for all.  Islam isn't a religion.  It's a criminal political organization masquerading as a religion, and they need to be declared an international criminal movement and banned from immigrating to the U.S.  As for the European policy on Muslim immigration - they've clearly demonstrated their policy is the perfect example for national suicide - so let's save American lives and culture and let them strangle to death on their own idiocy.

We have no obligation to let anyone into this country, but when we do it should be for the benefit of the United States - period!

Posted by Rich Kozlovich at 5:58 AM