The Donald has been president for a couple of months now. Here's what I've got, broken into bits as I'm able to piece things together. I apologize if this is somewhat stream of consciousness but as we all know, prognosticating about the new American president is not your normal spectator sport.

Part VII: Keystone and the Method to Trump’s Madness

President Donald Trump formally signed off on the Keystone XL pipeline on March 24.

While there will undoubtedly be ongoing legal and environmental wrangling (that’s just the nature of pipeline politics these days), the presidential waiver was the final formal step of the approval process. Construction will begin in short order, with completion likely in about two years.

1) The economics of Canadian crude in a world of U.S. shale is questionable, but at least now they aren’t so ridiculous.

U.S. shale is very low in contaminants. In a normal system it would sell for a massive premium, but the speed at which shale crude has come on-line has overwhelmed not just American infrastructure, but global energy trends. From-scratch, shale wells can now begin production in less time than OPEC states take to bring pre-existing spare production back online. The result is that despite its sky-high quality, U.S. shale actually sells for a slight discount to international norms.

Canadian oil sands is more traditional from a pricing point of view. It is thick and gooey and packed with sulfur; it’s one of the lowest quality crudes in the world and as such sells at a steep discount. It also gets sold almost exclusively into the U.S. Midwest, the same area that is awash with U.S. shale crude. The result is that Canadian crudes typically sell at a $10 a barrel discount to U.S. shale at least, and more than that to global norms.

The real problem (for Canadian crude) is production costs. U.S. shale oil full-cycle costs are now below $40 a barrel. Canadian heavy is about double that… and that’s before you consider that Canadian heavy often needs to be railed because there isn’t sufficient pipe transport capacity. The transport difference alone adds $5-10 a barrel more to Canadian heavy’s cost. Keystone XL will reduce that shipping cost to the $2-3 range, in theory making Canadian heavy more competitive over the long term. The production cost differential is still wide enough to likely dissuade any new volumes of Canadian heavy coming online anytime soon, but at least the economics of production will be a bit less out of whack vis-à-vis shale. 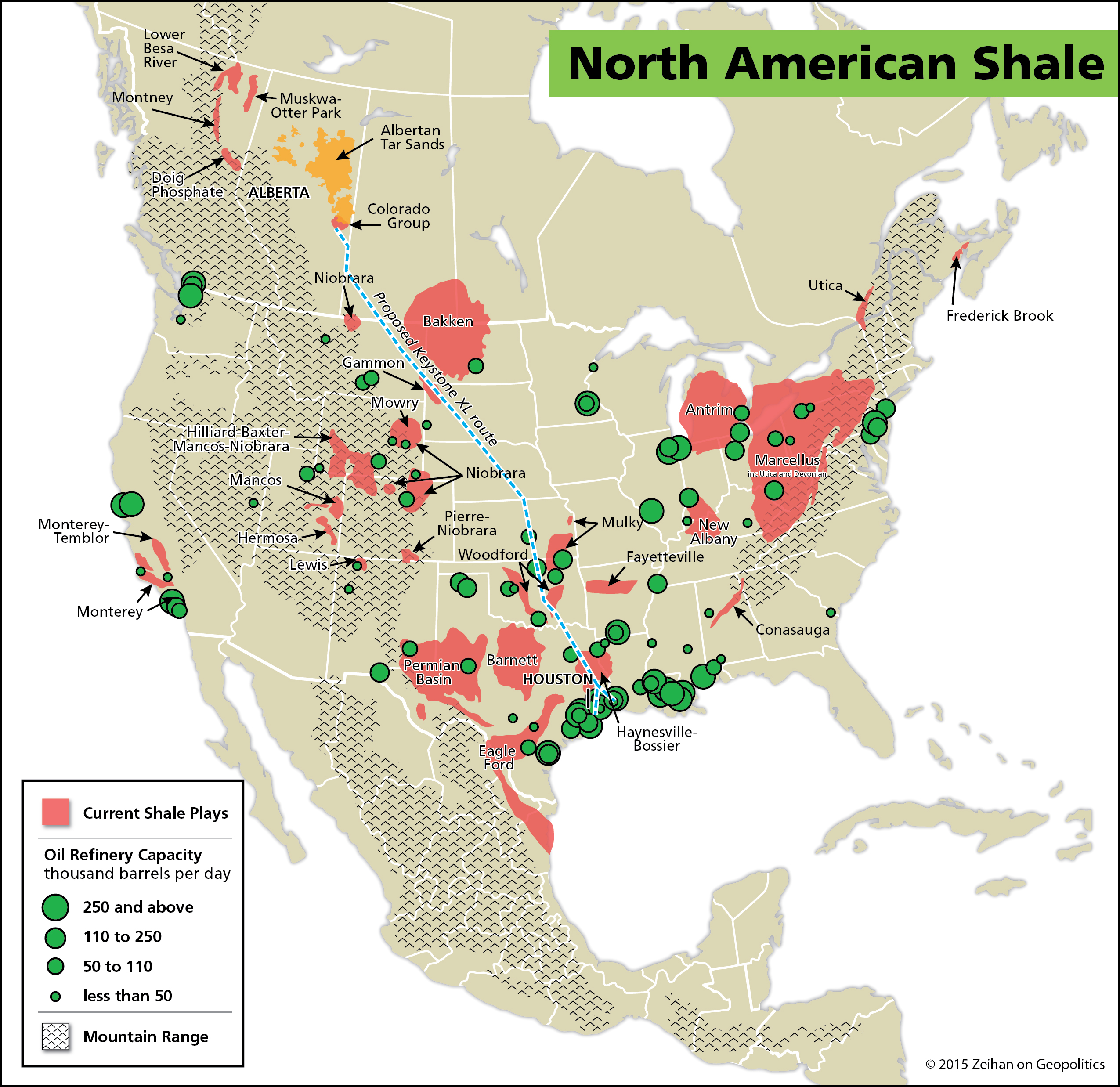 Ten years ago everyone knew that crudes like Canadian heavy were the future, and so everyone retooled their refineries to run on heavy, sour crudes. Then shale popped up and wrecked everyone’s well-laid and expensively-funded plans. Now in some ways U.S. refiners faces the best and worst of all worlds. Best in that the two major input streams -- Canadian heavy and shale -- can be purchased at discounts to the global norm. Worst in that the two crude streams are about as far apart as concerns quality as is possible and so cannot be run in the same facility.

The solution is blending facilities that mix the two along with a few other inputs to make something a bit more regularized, preferably with enough flexibility that refineries can custom-order a blend that matches their technical requirements as well as the market needs of the day. The problem isn’t just tank farms and dedicated pipelines, but those “other inputs” that help the blend remain blended. Otherwise the mixed crude tends to separate like salad dressing. Spoiler alert: Keystone XL guarantees that such blending facilities are going to be a big growth industry for the next decade.

3) Trump is not a normal president, and he’s becoming less so by the day.

That Trump moved quickly on Keystone XL doesn’t surprise me. What surprises me is that the announcement today came without Trump’s Elon-Musk-style leadup and fanfare. While many media like to lampoon him as, well, eminently lampoonable, the fact is that he is a shifting target who shows no sign of establishing a normal order of business. In the meantime, he is forcing the government to work the way he wants them to.

My contacts in the refining world have already detected a 180-degree shift in the way the Environmental Protection Agency operates. Under Obama, EPA inspectors would drop in unannounced and demand to see everything. Now they are giving weeks of notice for information requests and volunteering that even these looser reporting deadlines are more like squishy guidelines…and that’s before Trump’s 30%+ funding cut to the Agency kicks in.

The State Department has had minimal contact with its own Secretary, Rex Tillerson, who has emphasized personal diplomacy over institutional diplomacy. Both styles have pluses and minuses, but the Trump team is very clearly laying the groundwork for a broad-scale elimination of many of the levers of government power. People criticize Trump for seeming to still be floundering after two months on the job, but I see the greatest civil deconstruction in the history of the Republic. At the speed Trump is moving, it would take a generation of effort to rebuild the bureaucracy should future presidents attempt to turn back the clock. Trump may well have the greatest impact of any president on the structure of government since the New Deal.
Posted by Rich Kozlovich at 6:02 AM