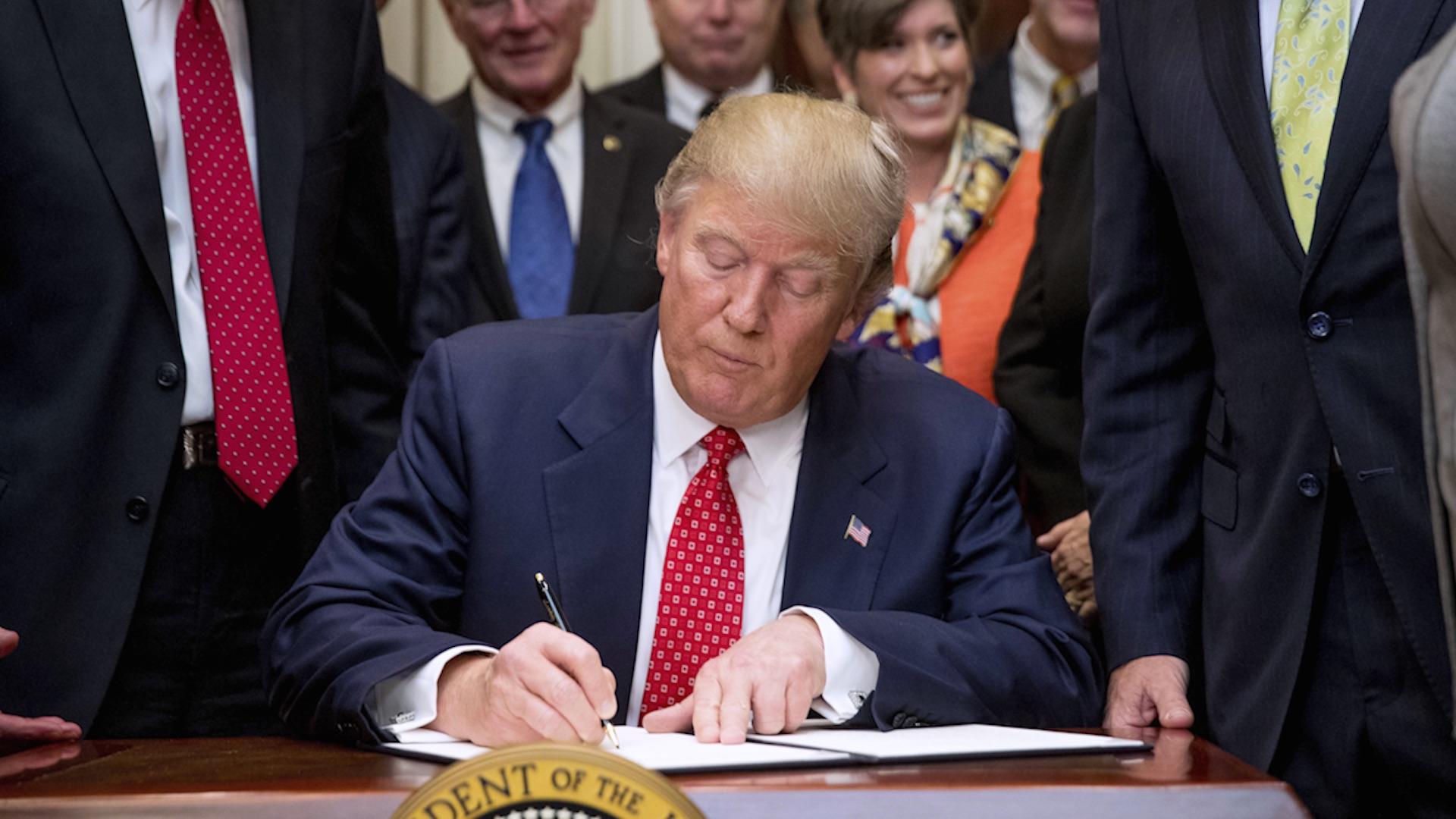 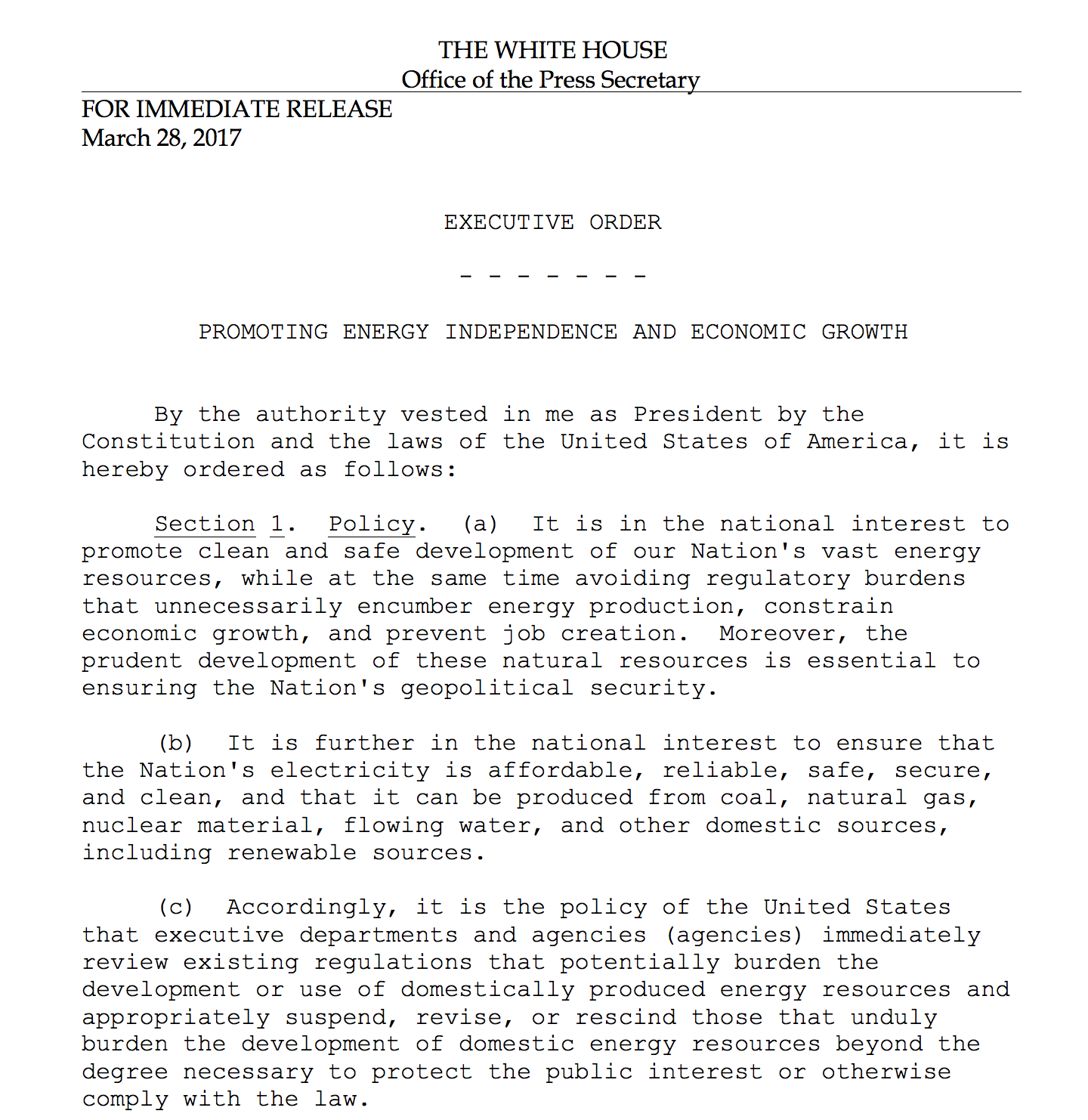 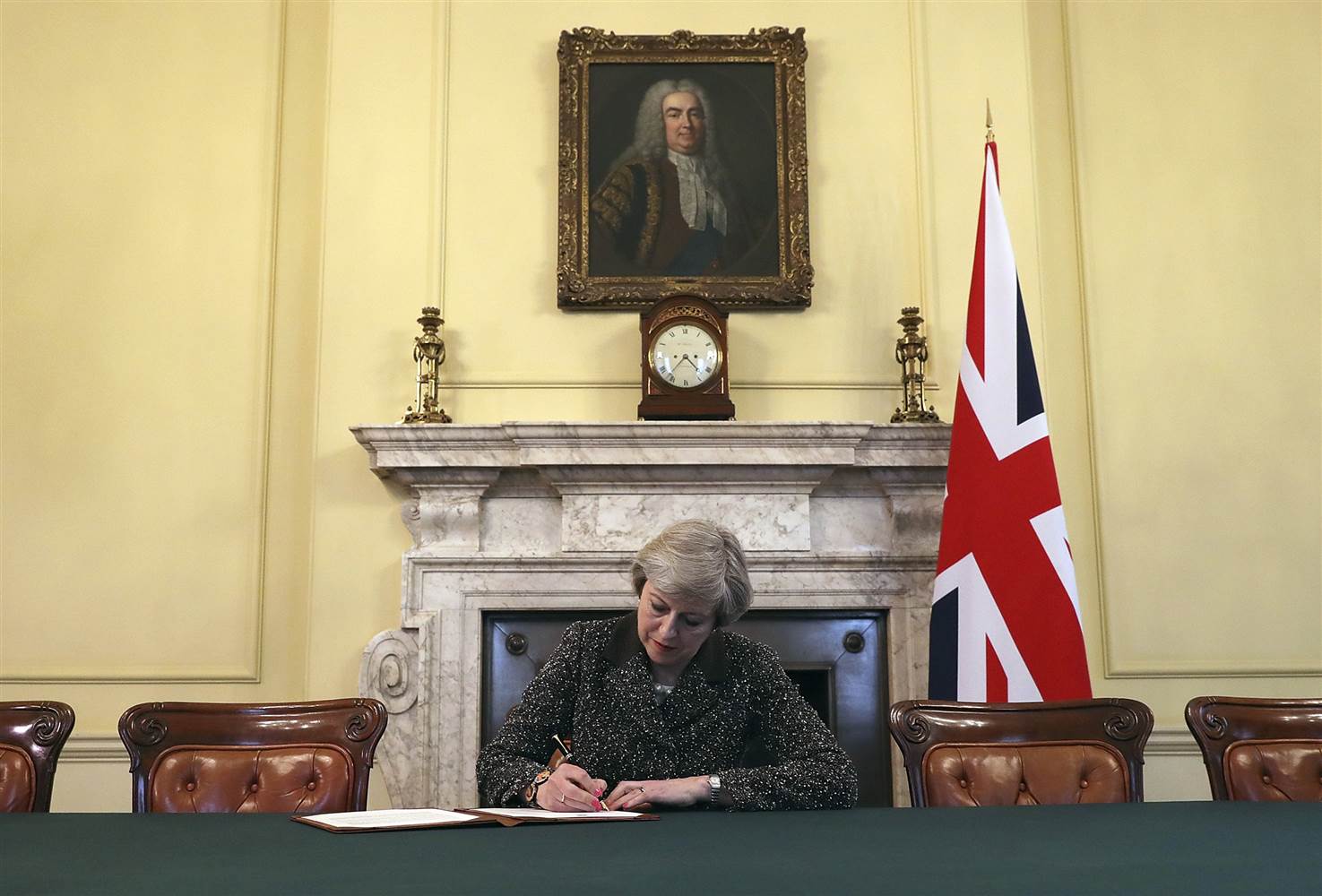 British Prime Minister Theresa May signs a letter invoking Article 50, which will formally start the process for the United Kingdom's exit from the European Union.


US President Donald Trump set out to obliterate his predecessor Barack Obama’s legacy on climate change as part of a bid to unleash America’s energy potential. Mr Trump last night signed a sweeping executive order slashing measures from the Obama era, a move that was welcomed by the oil and coal industries as a bold step to end regulations that were “choking” the economy. The president specifically targeted the Clean Power Plan, Mr Obama’s signature effort to tackle global warming. Mr Obama’s plan required states in the US to cut carbon emissions from power plants collectively by 32 per cent below 2005 levels by 2030. It was key for the US to meet obligations under the 2015 Paris climate accord, which has been signed by nearly 200 countries. In the election campaign Mr Trump promised to pull the US out of the Paris agreement but since taking office he has not mentioned it, and neither did the executive order. The issue was believed to be still under discussion at the White House. --The Daily Telegraph, 28 March 2017
President Donald Trump’s executive order dismantling large chunks of Barrack Obama’s environmental legacy is a cleverly written document that avoids the pitfalls of Trump’s controversial orders on immigration. Unlike those orders, which have been suspended by federal courts, this one leaves the administration with a rich variety of legal and tactical choices on how to proceed with the mission of eliminating Obama-era regulations on fossil fuels.. --Daniel Fisher, Forbes, 29 March 2017

China has claimed big gains in energy efficiency for 2016 despite coal and steel production that covered cities in smog during the second half of the year. Official figures from the National Bureau of Statistics (NBS) have offered a murky mix of partial data, unexplained results and apparent discrepancies in accounting for the country's energy use in a year of lower economic growth. The numbers pose a puzzling question with several implications for China's economy and the environment. How could the country have made such an advance in energy efficiency at a time when power consumption climbed by such a large amount and GDP grew by 6.7 percent, the slowest pace in 26 years? Other energy figures from the NBS may only add to the mystery. --Michael Lelyveld,
Radio Free Asia, 27 March 20

On Tuesday, President Trump signed an executive order that promoted American energy security by rolling back several overreaching Obama-era regulations that are central to the Paris climate pact. The president’s order addressed some of the most economically damaging regulations behind the Paris accords. This executive order sent Washington’s regulatory agencies back to the drawing board to help make American energy as clean as we can, as fast as we can, without raising costs on American families. The order has taken the legs out from under the Paris climate agreement that President Obama signed in his last year in office. It’s time for the United States to pull out of the Paris climate agreement entirely. --John Barrasso, The Washington Times, 29 March 2017

The Green Party lost every seat it held in a regional German legislature after a crushing election defeat Sunday. Greens did not receive the 5 percent of votes required to have a representative in the regional assembly of Saarland. The Greens still control 63 of the 630 seats in Germany’s national legislative body, but this may change during the September elections. Greens received three of the state legislature’s 51 seats in the 2009 election after receiving 5.9 percent of the vote. Voters may have punished left-leaning parties because Germany’s power grid almost collapsed in January due to poorly-performing wind turbines and solar panels. Unusually cloudy weather combined with atypical wind speeds set the stage for massive blackouts. --Andrew Follett, The Daily Caller, 27 March 2017
Posted by Rich Kozlovich at 5:52 AM