Why Is That So Hard To Get?

“If you look for truth, you may find comfort in the end; if you look for comfort you will not get either comfort or truth only soft soap and wishful thinking to begin, and in the end, despair.” C.S. Lewis


Well, here is one totally honest Muslim who outlines clearly and openly what Islam is really all about. We need to understand that to a Muslim strictly following the Koran and Sharia there is no such thing as a moderate Muslim.  To a strict Muslim they're viewed as apostates and deserve to die.  It's the "radicals" who are following Islamic law and the Koran. They're the true Muslims. The beheadings, the rapes, the violent assaults, the thievery against non-Muslims, and even open slavery in Muslim dominated countries, is perfectly acceptable under Sharia and the Koran.  Why is that so hard to get?


What I find most fascinating is how the leftists, especially the media, are silent or soft peddle this criminal behavior, and even supportive of this criminal organization masquerading as a religion. Have they somehow deluded themselves into thinking they won't be effected? They will be among the first Islamists kill.  Why is that so hard to get?


Muslims in the west demand tolerance.  What’s that mean for those who disagree with them?  Tolerance in Islam is a one way street.  You tolerate them until they have the power and then they will impose the most intolerant backward system existing in the modern world, Sharia.  Culturally - there’s a reason Islam dominated countries are largely still middle age tribal societies with modern weapons.  Islam!  Why is that so hard to get?


In spite of the tsunami of propaganda that Islam has “since its beginnings proven to be rich and fertile soil for the flowering of scientific ideas and technological innovation” over the centuries - let’s ponder this, and put it bluntly;


“You could count all the Muslim winners of Nobel Prizes in science on one hand and have enough fingers left to crochet. This simple, straightforward fact is, in and of itself, a dramatic indictment of Islam, underscoring its intrinsic intellectual backwardness, its refusal to compromise in the slightest its foundation of primitive superstition, and the extraordinary degree to which it manages to suppress the inborn human curiosity about the natural principles that undergird the real world’s workings. 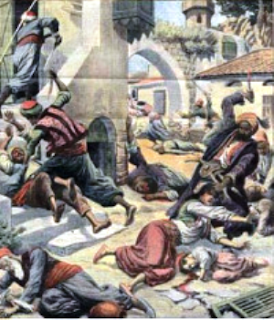 In an article entitled, “Surreal and Suicidal: Modern Western Histories of Islam” Raymond Ibrahim discusses the history of Islam and its interaction with the rest of the world.  And it’s overwhelmingly clear that interaction is foundationally violent.  Within ten years of Islam spilling out of Arabia they conquered what’s now Algeria, Tunisia, Libya, Egypt, Syria, Iraq, Iran, Parts of India, China and eventually Spain, part of France.  Italy, Sicily, Switzerland, Austria, Serbia, Armenia, Georgia, Crete, Cyprus, Croatia, Bosnia-Herzegovina, Macedonia, Belarus, Malta, Sardinia, Moldova, Slovakia and Montenegro.
Rome was sacked in 846 and in a clear demonstration of Muslim tolerance the Vatican was defiled.  Even Northern European countries, including Iceland, used to pray that “God save them from the Turk”.  These constant raids into European lands are what really destroyed the European economy during the Middle Ages, and Byzantium didn’t create any new coinage for 200 years.


History is being turned upside down by the media, and the PC police on the left, telling the world it’s the Muslim’s who are the victims of intolerance.  History clearly demonstrates that's a lie, and now we're seeing the consequences of western civilization having become ahistorical societies.  If we don’t understand the actual history of Islam we can’t properly correlate and properly evaluate that information to understand what’s happening right now!


Ibrahim goes on to say;


“Muslims are still exhibiting the same imperial impulse and intolerant supremacism that their conquering forbears did. The only difference is that the Muslim world is currently incapable of defeating the West through a conventional war.”


Muslim immigration isn't really immigration.  They've absolutely no desire to assimilate.  This "immigration" is in reality an enemy infiltration through which they can create a foundation for conquest of the West.  Why is that so hard to get?


Alan Caruba noted that “while Islam looks and sounds like a religion, it is more a political and economic entity concerned with controlling those populations where it is dominant, largely keeping them unable to resist the despots, monarchs, and clerics in charge. Iran’s Supreme Leader, for example, is worth billions.”  “What the West has yet to grasp is its intent on world domination. That is why jihad—the so-called holy war—is a central pillar of faith”  “The Qur’an is a battle plan for world conquest”.
Why is that so hard to get?

Posted by Rich Kozlovich at 5:10 AM