The Clinton Years
PBS recently aired a two-part television documentary on Bill Clinton, his life, and his two terms in office from 1993 to 2001. Following the years of economic growth and optimism from the Reagan-Bush41 era, it may have just been inevitable that the voters wanted to put a younger man in the White House. At the time, few of us realized how seriously demented, Al Gore, Clinton’s choice for his vice president, would turn out to be

Grand Funk GOP
“In negotiation, ‘yes’ is the worst word. It just betrays a fear of failure and a fear of losing this deal, and it primes you to please the other side, to rush ahead, to compromise early and often to come to a deal, any deal. ‘No’ is the best word. It’s what you want to be prepared to say and to hear. ‘No’ will liberate you and protect you.”

"Fakegate" Blows Up in Warmist Faces 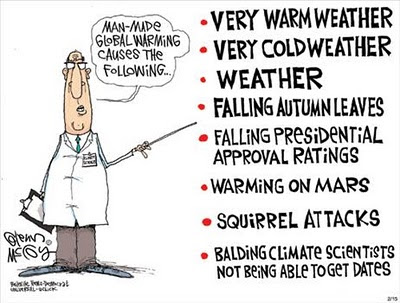 On February 16, I published “Anatomy of a Global Warming Hoax” concerning the theft of the private records of The Heartland Institute’s board meeting and the creation of an alleged forged document intended to harm its reputation as a long time advocate of the real, not fake, science that has been the basis of the global warming—now called “climate change”—hoax.

Greener Than Thou
The most obnoxious and hypocritical people are those who are always preaching a “greener” way of life, insisting that anything that constitutes our modern lifestyles is destroying the Earth and depleting its natural resources. Never mind that we depend upon oil, natural gas, coal, and a host of minerals and chemicals for that lifestyle, the absence of which caused people in earlier eras to live shorter, far more unpleasant lives.