My Quote of the Day

There is no need for these expensive alternative energy programs that are at best unreliable, and so unreliable that traditional power plants have to be built and maintained in order to supply power when these stupid green sources fail to work, such as the sun stops shining in the winter and the wind stops blowing in the summer. In order to have ‘alternative’ energy we have to pay for energy we aren’t using in order to pay for energy we don’t need. How stupid can we get? - Rich Kozlovich

A friend told me last Monday that the answer to all of these gas problems is to get all of these gas driven cars off the highway and force everyone to drive electric cars. Unfortunately no matter how I tried to explain it to him why this isn't a solution to our problems..... that was his answer and he was sticking to it. Ok....so I gave up trying and moved on to taxes. We both agreed that Obama was right. Everyone has to pay their fair share and we want that 45% or more that pay no federal income taxes to start paying. Then we can look at what the fair share of everyone else should be. At any rate, leftism must be a form or insanity. Why? Because their solutions are the same solutions that have made the problems they were supposed to fix worse. Insane because they actively work against solutions that do work and deliberately distort the history that shows this to be true. We really do need to get that! 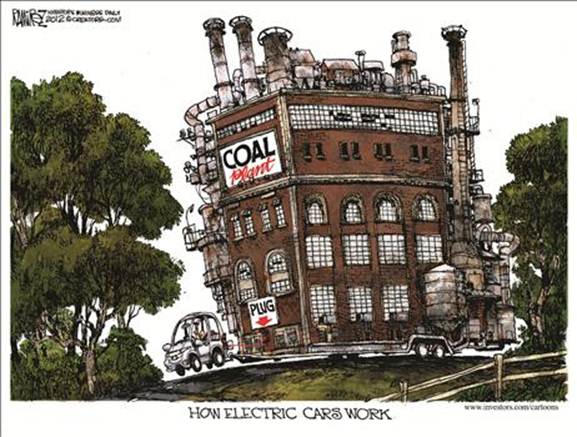 The Tesla "Brick"!
Motors' lineup of all-electric vehicles — its existing Roadster, almost certainly its impending Model S, and possibly its future Model X — apparently suffer from a severe limitation that can largely destroy the value of the vehicle. If the battery is ever totally discharged, the owner is left with what Tesla describes as a "brick": a completely immobile vehicle that cannot be started or even pushed down the street. The only known remedy is for the owner to pay Tesla approximately $40,000 to replace the entire battery. Unlike practically every other modern car problem, neither Tesla's warranty nor typical car insurance policies provide any protection from this major financial loss. Here's how it happens.

With All The Volts Counted, Taxpayers Lose Again
Doubling down on industrial policy failure, the administration decides to bump up the taxpayer subsidy for Government Motors' touted electric car. Who said its range wasn't enough to drive us to the poor house? Tucked away in the recesses of President Obama's 2013 budget, a budget that Senate Majority Leader Harry Reid says he will not bring to the Senate floor, is a nugget that speaks volumes about the troubles we're in:  While delaying the Keystone XL pipeline, the administration plans to increase the subsidy for the Chevy Volt and other "new technology" vehicles to $10,000 per car.

Fox Tests Volt, Runs Out Of Juice In Lincoln Tunnel
GM noted that Fox has issues with the Volt. They give Eric Bolling a Chevy Volt for a week. And this is what GM receives in return. Ingrates.

When 'being green' means subsidies for rich, harm for the poorOne thing we can expect in President Obama's State of the Union speech is for him to echo his declaration from last month, "That's the very simple choice that's facing Congress right now. ... Are you willing to fight as hard for middle-class families as you do for those who are most fortunate?" Yet when it comes to the environment, the president showers favors on the rich while punishing the poor. During last year's Occupy Wall Street protests, Obama expressed sympathy with calls for more "green" policies from the self-styled advocates for the 99 percent. So far, however, the environmental agenda has overwhelmingly favored the 1 percent.


Czar of the Day