A Prosperity Contest: America’s Poor Vs. the Middle Class in other Nations


My primary job is dealing with misguided public policy in the United States.

Seems like there is a lot to criticize, right? 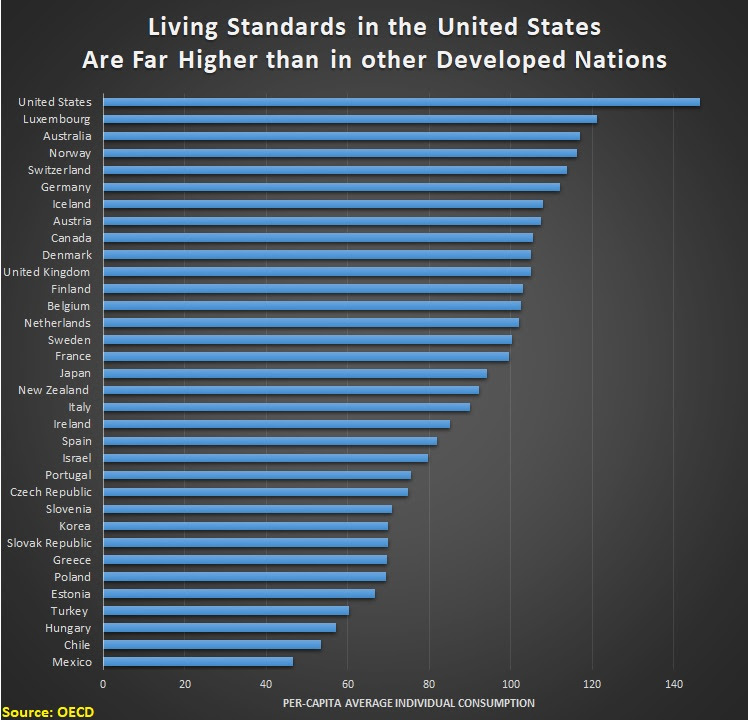 Yes, but sometimes the key to success is being “less worse” than your competitors. So while I’m critical of many bad policies in the United States, it’s worth noting that America nonetheless ranks #6 for overall economic liberty according to the Fraser Institute.

As such, it’s not surprising that America has higher living standards than most other developed nations according to the “actual individual consumption” data from the Organization for Economic Cooperation and Development.

The gap is so large that I’ve wondered how lower-income people in the United States would rank compared to average people in other countries.

Well, the folks at Just Facts have investigated precisely this issue using World Bank data and found some remarkable results.

…after accounting for all income, charity, and non-cash welfare benefits like subsidized housing and Food Stamps—the poorest 20% of Americans consume more goods and services than the national averages for all people in most affluent countries. …In other words, if the U.S. “poor” were a nation, it would be one of the world’s richest. …The World Bank publishes a comprehensive dataset on consumption that isn’t dependent on the accuracy of household surveys and includes all goods and services, but it only provides the average consumption per person in each nation—not the poorest people in each nation. However, the U.S. Bureau of Economic Analysis published a study that provides exactly that for 2010. Combined with World Bank data for the same year, these datasets show that the poorest 20% of U.S. households have higher average consumption per person than the averages for all people in most nations of the OECD and Europe… The high consumption of America’s “poor” doesn’t mean they live better than average people in the nations they outpace, like Spain, Denmark, Japan, Greece, and New Zealand. …Nonetheless, the fact remains that the privilege of living in the U.S. affords poor people with more material resources than the averages for most of the world’s richest nations.

There are some challenges in putting together this type of comparison, so the folks at Just Facts are very clear in showing their methodology.

They’ve certainly come up with results that make sense, particularly when compared their results with the OECD AIC numbers.

Here’s one of the charts from the report.

You can see that the bottom 20 percent of Americans do quite well compared to the average persons in other developed nations.

By the way, the report from Just Facts also criticizes the New York Times for dishonest analysis of poverty. Since I’ve felt compelled to do the same thing, I can definitely sympathize.

The bottom line is that free markets and limited government are the best way to help lower-income people enjoy more prosperity.
Posted by Rich Kozlovich at 5:38 AM