The XYZ Factor of Organizations

This week I was sitting and thinking about an article by Alan Caruba entitled, Liberal Lunacy. Alan starts out by saying:

“Conservative commentators read what liberals have to say if only to get a glimpse into their current memes on various topics. It is always daunting because one cannot do this without coming away convinced that they are lunatics, devoid of any sense of history or reality, both of which they routinely invent to defend their opinions.”


For whatever reason I suddenly realized that no matter what kind of organization people belong to, either religious or secular, that there is a constantly repeating pattern. As I thought about it I expanded my thinking to include organizations of the Right, the Left, the secular and the religious, and I found that it fits all of them…well almost….we will go there later! At any rate, I call it the XYZ Factor of organizations.

Let’s start with (X). This is the purest form of the organizational structure, and outlines the philosophy that will determine their actions. The U.S. Constitution in conjunction with the Declaration of Independence would be an example. This outlines, for the first time in human history, the idea that the people don’t belong to the ruling authority; that in point of fact the ruling authority exists because that is the desire of the people. This became the first bottom up governmental structure in history that made it clear the government had no rights, but was being granted rights by the people. Furthermore, those rights had been “endowed” by a creator, not the government that those people created. In short, power and privilege flows up, not down, and can be taken away just as readily.

Secondly we examine (Y). Diversity of the groups within the structure is represented by (Y); whether it is racial, ethnic, geographic, religious or generational. The United States of America became the most diverse culture in the world. The people of this country are the people of the world. Every culture, every religion, every philosophy represented anywhere else in the world has some component in America. In spite of whatever problems that may exist among these groups; for the most part they get along because of the concepts and principles outlined in (X).

Finally, as we examine (Z). We have to realize that (Z) represents the practical application of what is the purest philosophical understanding of their structure. This is the paradigm of values, and the practical application of those values based on their personal views, or the views generated by the upbringing and culture in which they thrived before becoming part of some organization. All being done while presumably attempting to stay within the frame work of their stated philosophy.

On the Right (X) is defined as, less government in all of its forms; less taxes, less intrusion in our private lives, less regulations, more attention to personal rights, especially property rights, while still maintaining a civil organization that can protect society from the criminals and those who would attack the nation, foreign and domestic.

On the Right, (Y) is represented by a wide diversity of those groups mentioned. However, they are united in their philosophy, especially involving traditional and conservative values, and act accordingly. Perhaps not in all the details, which must be expected in any organized group, but philosophically they are united irrespective of all of the divergent groups listed. As a group they preach and live conservative, traditional lives and preach those values to others! They represent and promote a civil and stable society. The Tea Party is a clear representation of the Right, who is largely religious in their personal view of the universe, and believes that if there is no God there is no purpose.

On the Right (Z) is the easiest thing to understand among them. They have either been raised with traditional conservative values, or have adopted them through observation. The Right’s divergent groups come together as a marriage of commitment and affection for the values they share, values they will loyally defend, and will practice that which promotes those values.

Recap - On the right their philosophy is solidly outlined, the groups are diverse yet solidly united in their values, and they work diligently to loyally practice what they believe. 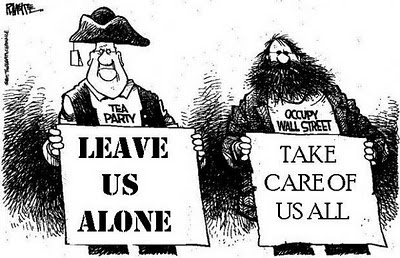 Defining (X) among the left isn’t easy. It is impossible!  It isn’t even defined by leftists. Even in the 1930’s Will Rogers noted; “I belong to no organized party. I am a Democrat.” The real problem is that since they really have no philosophy other than whatever populist view works at the time; they are completely willing to turn 180 degrees on an issue if it means gaining power. Margaret Sanger is a perfect example of the shifting values of the left. Sanger was the founder of the American Birth Control League, now Planned Parenthood. She was as one of the most famous promoters of eugenics of her day; eugenics being a concept that promotes the elimination of the “unfit” from society to prevent deterioration of the species by preventing the breeding of lesser human beings with those of higher quality.

She even had a major impact on Hitler’s thinking before WWII regarding eugenics. Although she personally was against abortion and execution of those she considered unfit, i.e. the “colored” races, the imbeciles and those born defective, she did want to rid the world of blacks though forced sterilization. She also favored strict immigration to prevent the “unfit” from entering the country. She also favored the use of religious leaders to disguise and promote her true intentions. At the beginning of the 20th century the “Progressive” movement’s binding force was religion.

Now the left has turned completely around claiming credit for the anti discriminatory laws passed by those who are part of the right today, condemning them as racists because they won't support their destructive liberal policies and demanding almost complete open immigration.

Structurally, the left is more representative by the complete disorganization of the Occupy Wall Street Movement because it has no sturcture; it is irrational, disloyal, disorganized, no stable philosophy, no workable solutions, selfish, self serving, jealous, envious, hateful, violent, destructive of a stable society, distrustful of their own and typically atheistic or agnostic in its view of the universe.

Diversity among the Left is no greater or less than the Right. Yet those represented by the (Y) factor on the left have nothing in common except the need to promote their own needs and the desire to make laws that destroy those they hate and give them power to control everyone else’s life. These are the only things the leftist groups have in common. There is no marriage of commitment on the left. It is only a marriage of convenience.

On the left they have no loyalty to (X) because they cannot agree on the concept of “truth”. There is no truth to them because they don’t believe there is any real ‘truth’; there is no absolute right and wrong. As a result the diversity represented by (Y) remains completely divided with no sense of loyalty to a common commitment.

Defining (Z) on the left is easy. Since they don’t have a thing in common with each other except for their hate and contempt of a stable society, their actions bear no resemblance to any defined philosophy because they have none. Since the left is based on selfishness, hate and jealousy, all of their actions will be nonspecific to any philosophy. They will abandon anyone or anything for political gain. They have no sense of loyalty to anything except their own desires and their need for power.

It is impossible for the Left to act with any restraint within any philosophical framework because the left has no value system in which it will remain loyal. The actions of left represents unending disharmony.

The Left isn’t an organization; it is a nightmarish mob of destructive self promoters that would destroy everything to gain nothing. They were called anarchists in the late 1800’s and early 1900’s. The Wall Street Movement truly is a true representation of "The Left”; misery, squalor and violence, ignorance and disharmony.

To Recap - We really need to get this! The Left has no solid philosophy. They only have transient philosophies that they will promptly abandon as soon as it seems prudent to do so. Loyalty, just as historical facts and consistency of logic, are totally alien concepts to them. Their diverse groups have no affection for each other or anyone else since there is no binding philosophy to guide their practices, which are disingenuous and self serving. They would as happily turn and rend one of their own as they would anyone on the right.

They demand utopia! They impose dystopia!
Posted by Rich Kozlovich at 4:19 AM

Email ThisBlogThis!Share to TwitterShare to FacebookShare to Pinterest
Labels: My Commentary, XYZ Factor of Organizations