By Hank Campbell — August 20, 2018 @ American Council on Science and Health

1. If you don't have HBO, and if you have HBO but you don't watch John Oliver's "Last Week Tonight", and if you do ordinarily watch but missed the August 13th episode...well, you didn't miss much.

We're a science non-profit with $2 billion in activists lined up against us, we have had world-class hit pieces done against science at their bequest, in places like "60 Minutes" and "The Daily Show with Jon Stewart." John Oliver instead exposed himself as being a pretender in the science community, siding readily with trade group hacks out to undermine American expertise. By comparison, rather than being a humorous or at least sharp take, his attack was instead flaccid. It wasn't funny, it meandered all over the place, and it wasn't accurate enough to be interesting. Even the graphics were middle school; does Oliver hate clean dishes? Healthy teeth? Does he endorse cigarettes? Why was that generic stuff in there next to our logo? 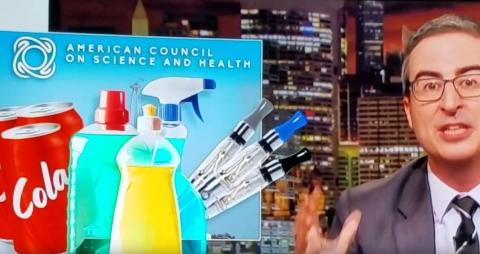 Comedy works when you take reality and twist it out of phase a little. You make the believable a little ridiculous. If you just make up nonsense it is shrill conspiracy theory. Which is what he came across like to the science community. The only people defending him were the usual political suspects; partisan english majors who are tangentially in science journalism because they weren't skilled enough writers to make it in politics, like deniers for hire Charles Seife, Liza Gross and predictable other fellow travelers. What little credibility those types who wait around the activism community hoping for financial scraps had left was shattered when they sided with a group that collaborates with the anti-farming and the anti-vaccine movements, ans are entirely funded by corporations they happen to like.

Hey, even Elvis had bad albums and Oliver usually does better. If he needs some help in the writing room, I offered to pitch in. He would have to settle for me, because if we let Josh Bloom write their science humor, the Internet would collapse.

If you want to let him know what you think of his undermining science for activists opposed to it, on Twitter you can write him and tell him you don't like that he is using anti-science groups to undermine nonprofits. On Facebook, you can comment here. Or you can contact the producer, Charles Wilson, charles.wilson@lastweektonight.com or at (212) 975-8186

2. On a better science note, the lawyers at Environmental Working Group were hoping to capitalize on a California jury believing a weed killer could somehow cause human cancer, so they got a lab to "detect" glyphosate and rushed out a "report" saying cereal was unsafe. One media outlet, CNN, was wise enough to have their B.S. detector go off and spoke with our Dr. Alex Berezow, who assured them it was still safe to eat breakfast. The fact is that when their lawyers were disappointed the glyphosate levels were 1% of the safe level determined by EPA (the level you could eat every day for life and not be harmed) they fabricated a new safe level that was scientifically meaningless. But conveniently below the level they detected.

It's corporate media, CNN still had to chase pageviews by screaming about kids and chemicals in the headline, but they were the only mainstream outlet that looked pass the shameless lawsuit bait, so kudos to them. And it got coverage in lots of places because they sided with science over chemophobia.

Other places our sane commentary was syndicated:
3. In Canada Free Press, longtime journalist Jack Dini takes down Greenpeace, WWF, World Wildlife Fund, Natural Resources Defense Council, Environmental Working Group, Sierra Club, and Nature Conservancy, exposing their hypocrisy and of course their love of their own corporate money. As long as it gets branded for something meaningless like "sustainability."

4. Newsweek covered the news that Nebraska was forced to use fentanyl to execute a death row criminal - because drug companies don't want the bad press of having their products used that way in a Twitter world. Dr. Josh Bloom spoke with their journalist about why they did so, and why it was ironic that government wants to put fentanyl dealers on death row - when flawed government policies are what caused a lot of legitimate pain patients to be forced to deal with criminals who end up killing people. Now dealers can be executed with the products they sell, and pain patients just suffer.

5. Dr. Alex Berezow was on two radio programs last week. His recurring segment called Real Science With Dr. B. (starting at 19:06) and with David Boze filling in for John Carlson on his show.

Posted by Rich Kozlovich at 7:04 AM