Game Changing Approach to New Antibiotics, Thanks to Chemistry

Two decades after new antibiotic research came to a screeching halt, we find ourselves in a gigantic mess. Hardly a day goes by without a news story about "superbugs"—multi-drug resistant bacteria, and how difficult it is to kill them.

This will only get worse. Bacterial resistance is a one-way street. Once an antibiotic stops working against a particular pathogen, it will not work again.

But, thanks to an unexpected observation, finding new antibiotics may be a whole lot easier, because, in a Nature paper, chemist Michele Richter and colleagues at the University of Illinois tell us what to look at and what to avoid. This one is mighty strange, but it could also be exceedingly important.
The primary reasons for the absence of new antibiotics today are:
The downturn in the discovery of new antibiotics is clearly shown in Figure 1. 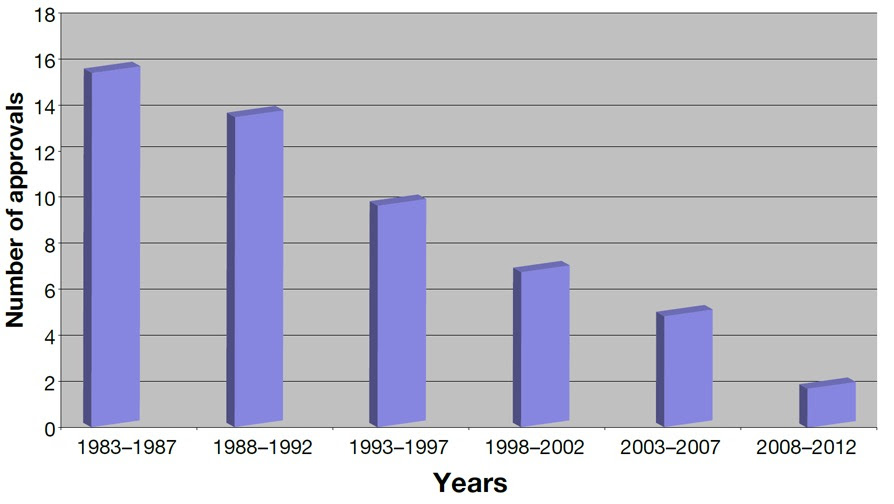 Source: Nature Although this graph is obviously dated, it illustrates the magnitude of the decline in the approval of new antibiotics. Fortunately, the FDA has become more cooperative, and research in this area is on the uptick. There have been six new antibiotics approved since 2012.
There are two broad categories of bacteria: Gram-negative bacteria, which have a liposaccharide-coated membrane on their outer surface, while their Gram-positive counterparts, which do not. This second membrane, which keeps many drugs out of the cell, makes the discovery of Gram-negative antibiotics more difficult. Finding antibiotics against resistant Gram-negative bacteria is harder still.

The outer coating of Gram-positive (left) and Gram-negative (right) bacteria. The outer membrane (blue), which exists only in Gram-negative organisms makes it more difficult for drugs to enter the cell. Image adapted from Schmoop.com

The findings of Richter's group may make the design and development of antibiotics to treat Gram-negative bacteria a whole lot easier. It is based on something that has plagued all of us medicinal chemists forever - cell permeability. (See: Hepatitis C: Academia And Industry Work Together To Find A Cure). Drugs must be able to get inside the target cell. If there is a barrier to prevent this, the drug will not work. Cell permeability is routinely measured even before the experimental drug is tested in any functional assay.

The ability to predict permeability across the outer membrane of Gram-negative bacteria is potentially a huge advance, but it also reshapes the ideas that have been drummed into in the heads of trained medicinal chemists forever.

Time after time during our careers we would discover a chemical compound that looked great in in vitro (outside the body) tests, only to flop entirely when it was given to an animal. Pfizer's Chris Lipinski came up with the "Rule of Five" in 1997. The "Lipinski rules" are useful for identifying the properties of drugs that will be able to be taken in pill form rather than by injection. There are exceptions, but the rule is a very handy guideline. Its message: molecules that have a better change of being oral drugs will preferably 1) be small (have a molecular weight of 500 or less), and 2) have both water solubility (polar compounds) and fat solubility (non-polar compounds). There are three other parameters. The properties that enable a molecule to be orally active are not terribly different from those that make it permeable to cells, at least until now.

Unlike standard permeability assays, where human cells are used (2), the Richter group studied permeability across the two membranes and one one cell wall that make up the outside of Gram-negative bacteria. This was done by exposing the bugs to a drug and measuring how much of it could be found inside the cell. One particular class of organic molecule stood out in a big way— primary amines.

Apologies in advance for the chemistry lesson:

Primary amines are derivatives of ammonia where one of the hydrogen atoms is replaced by carbon. Secondary amines have two carbon atoms bound to nitrogen, and tertiary amines have three carbons and no hydrogen. All three sub-classes of amines have one thing in common—they are basic and will react with water. Here is the reaction:

The acid-base reactions of an amine and water. The nitrogen "steals" one of the water's hydrogen atoms, giving two ions, one positive (an ammonium cation aka amine salt, which is positive, and hydroxide, which is negative. As with all ions, both species have an electric charge.

Any organic chemist will tell you that all three types of amines are basic, and will undergo this reaction. He/she will also tell you that the properties of the amine salt (ammonium cations) that are formed will behave mostly the same, regardless of whether they are derived from a primary, secondary, or tertiary amine. He or she should have had a talk with E. coli bacteria. They have a very different idea of how they are supposed to behave. The scatter plot below shows that only amines (which exist as positively charged ions at physiological pH because of their reaction with water) accumulate within the cell. Neither neutral nor negatively charged molecules will accumulate inside the E. coli - only those that bear a positive charge (these are also called cations or ammonium cations). 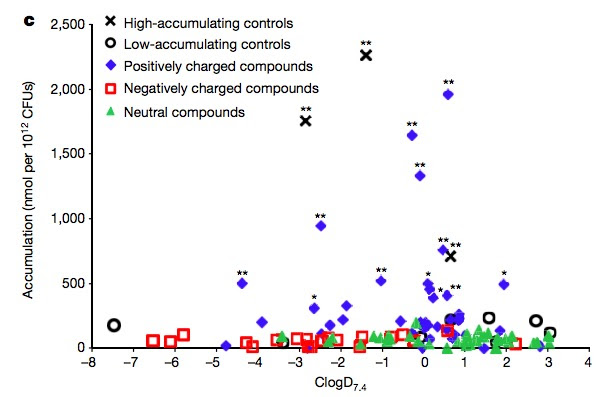 Whenever dealing with biological systems, it is very rare to see an effect that is so clear, and without variability, yet the scatter plot shows both. But, what is really strange is the difference in the behavior of the three classes of amines. In organic chemistry, with a few exceptions, all three classes behave more or less the same. But not here.  The outer membrane of E. coli will gleefully let in primary amine salts but gets pretty fussy after that. They want nothing to do with other types of amines. Pretty snobby if you ask me. This effect is both strange and unexpected, but it is clearly real, as shown below.

The difference in accumulation in E. cole in a primary (left), secondary (middle), and tertiary (right) version of the same molecule. Only the primary amine analog accumulates. This trend holds true for other examples in the paper. I have never seen anything like this.

The authors go into a detailed explanation and present theories explaining this effect. These are far beyond the scope of this article. But, what is clear is that these experiments can tell scientists what to aim for and what to avoid—a tool which should give a significant boost to new antibiotic discovery and development—something that is sorely needed.
Notes:

(1) The trouble with searching for antibiotics in soil is that you keep discovering the same drug over and over. Natural products chemists find this to be especially frustration.

(2) Caco-2 cells are "descendants" of a colon cancer cell line that was developed at Sloane Kettering. The cells form a monolayer, which has properties similar to the cells that line the intestine—a physiochemical barrier that allows only certain chemicals to pass through. Caco-2 monolayers are a standard assay used in drug development, since they are a reliable method of predicting absorption into the intestine.  Cancerous cells are used because they are immortal. Normal cells would die.

Posted by Rich Kozlovich at 5:36 AM

Email ThisBlogThis!Share to TwitterShare to FacebookShare to Pinterest
Labels: Antibiotics