We just received 450 pages of e-mails from the EPA via the Freedom of Information Act covering Kenski’s selection.

They illustrate the need to #DrainTheSwamp.

The The 450 pages of e-mails basically include the nominations for the open CASAC slot, miscellaneous questions/answers about the process, recommendations for nominees, and the final selection and acceptance of Kenski.

As reported in October, EPA received 83 recommendations for the relatively short list of nominees. While Michael Honeycutt, Director of the Toxicology Division of the Texas Commission on Environmental Quality, received 60 of the recommendations Kenski only received one — or rather part of one. And here it is (note highlighted text). 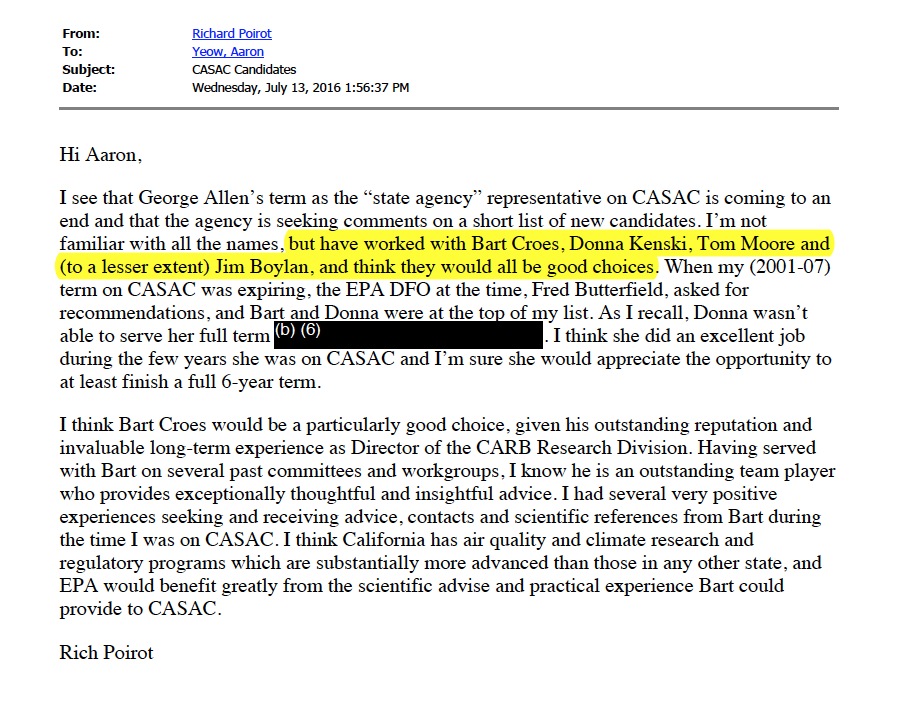 So Kenski was recommended as a “good choice” amid three other “good choices.” The recommendation came from a Bachelor’s-degreed Vermont state official, Rich Poirot, who is affiliated with the EPA Science Advisory Board as a consultant on air quality and climate. Nothing too special about Poirot or his recommendation of Kenski.
In contrast, just some of Honeycutt’s recommendations include:
There are many more — 54 to be exact — expressing similar sentiments about Honeycutt from knowledgable people.

And while no commenter spoke ill of Dr. Honeycutt, the same cannot be said for Kenski.
Sen. Jim Inhofe (R-Okla.) pointed out that Kenski is not impartial. In 2008, Kenski participated in a letter ridiculing then-EPA administrator Stephen Johnson for not following CASAC’s recommendation for the National Ambient Air Quality Standard (NAAQS) for ozone. This action was partisan and overstepped the statutory authority of CASAC.

Nevertheless on October 7, 2016, the following e-mail was sent to Kenski: 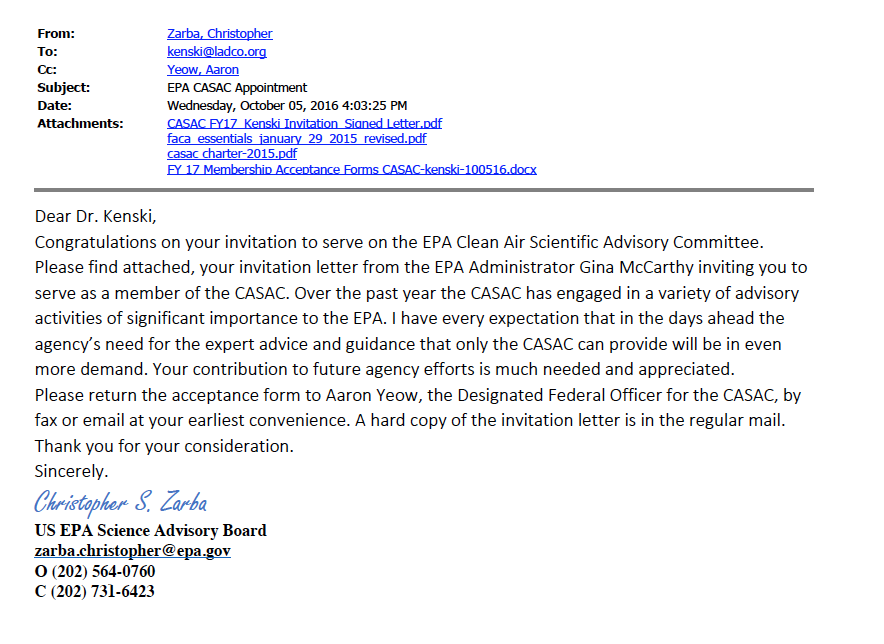 This is the original Freedom of Information Act Request submitted to EPA by JunkScience:


I am requesting all the EPA staff e-mail (incoming and outgoing) and documents relating to the nomination and selection of Donna Kenski to the Clean Air Scientific Advisory Committee. E-mails and documents should include all those that mention/discuss any of the nominees. The period for this request is April 4, 2016 through October 7, 2016.

Despite the request for all e-mails/docuemnts, EPA provided nothing indicating any deliberative process for the nominees occurred at all — not even redacted documents. It’s hard to believe there is not more of a paper trail.

So EPA clearly withheld relevant documents/emails improperly. This failure supports the notion that its selection process is a rigged system. In any event, it is time to #DrainTheSwamp.
Posted by Rich Kozlovich at 4:45 AM