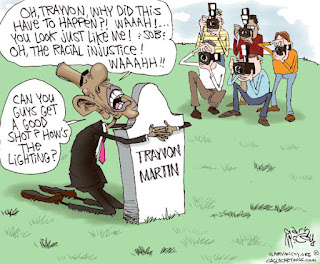 ...I would count the initial reporting on the killing of Trayvon Martin in Sanford, Florida, as among the worst media coverage in a while because, as the facts begin to emerge after a month, it turns out that there was an eye witness to the incident in which George Zimmerman, a neighborhood watch volunteer, suffered a broken nose and injuries to the back of his head consistent with an attack

Trayvon Martin shooting: New details emerge from Twitter account, witness testimony
As George Zimmerman's supporters work to stem the rising tide of public outrage aimed at the neighborhood watchman who shot and killed Florida teenager Trayvon Martin last month, a new picture of the victim—culled from the 17-year-old's Twitter account and witness testimony leaked from local law enforcement—has emerged. "With a single punch," the Orlando Sentinel, citing police sources, reported Monday, "Trayvon Martin decked the Neighborhood Watch volunteer ... climbed on top of [him] and slammed his head into the sidewalk several times, leaving him bloody and battered." "That is the account Zimmerman gave police," the paper said, "and much of it has been corroborated by witnesses, authorities say."

Trayvon Doesn’t Matter to the Left
By Ben Shapiro
The real agenda.
Posted by Rich Kozlovich at 5:35 AM