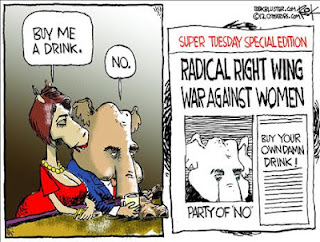 Who is Sandra Fluke?
by Ann Coulter

Fluke is the latest in a long line of my absolute favorite liberal typology: hysterical drama queens......From Murphy Brown to the Jersey Girls, Cindy Sheehan, Joe Wilson and the New School's Jean Rohe, these fantasists inject themselves into a boiling-hot public debate and then claim victim status when anyone criticizes them. At least since I've been keeping score, liberals had their first brush with the dark night of fascism in 1992, when Dan Quayle said of a fictional TV character: "It doesn't help matters when prime-time TV has Murphy Brown ... mocking the importance of fathers by bearing a child alone and calling it just another lifestyle choice."

Suddenly, it was 1939 Germany and multimillionaire Hollywood elites were the Jews.

At the Emmy Awards ceremony that year, the creator of "Murphy Brown," Diane English, took the occasion to say: "I would like to thank our sponsors for hanging in there when it was getting really dangerous."