Quotes of the Day

1. The only valid definition for green is that it is a mixture of blue and yellow.  Any other definition deminishes a perfectly good color. - I think this one is mine
2. Often the choice is not between what you want and what you don't want. It's between what you don't want and what you REALLY don't want. - Unknown
3. Put the federal government in charge of the Sahara Desert and in five years there'd be a sand shortage. - Milton Friedman 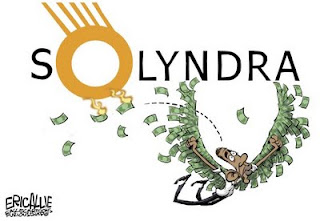 Ouch! A Quarter of a Trillion Dollars for the Green Carpetbaggers !
A UN report has calculated last year's investment in so-called "clean energy" at a staggering 243 billion dollars for technology that basically doesn't work in real energy systems. One quarter of a trillion dollars could solve a lot of the world's problems in feeding and housing the poorest, providing education and medical care and bringing hope and opportunity to those who have none but instead the money will fund every loony project these onanists can dream up and call "clean energy".


German 'Energy Revolution' Depends on Nuclear Imports
Germany's decision to phase out its nuclear power plants by 2022 has rapidly transformed it from power exporter to importer. Despite Berlin's pledge to move away from nuclear, the country is now merely buying atomic energy from neighbors like the Czech Republic and France. The nuclear power plant in the Czech village of Temelin, barely 100 kilometers (62 miles) as the crow flies from the Bavarian city of Passau, has a reputation for being particularly prone to malfunctions. Over the years, there have been 130 reported incidents here. Sometimes it's a generator that fails; at others, a few thousand liters of radioactive liquid leak out of the plant. "The entire facility needs to be shut down immediately," says Rebecca Harms, a member of the European Parliament representing Germany's Green Party……….The German government's 180-degree turn in nuclear policy has helped breathe new life into Europe's energy industry -- though not always to Germany's benefit. The country has gone from being an energy exporter to an energy importer practically overnight, which brings along with it a number of negative consequences for its economy, consumers and security.

Solyndra - Obama's Big Green Boondoggle
With the scandalous bankruptcy of Solyndra (a shady California solar power company that received $535 million in stimulus funds and is now under investigation by the FBI) hanging overhead, President Obama wisely whitewashed any mention of "green jobs" out of his latest address to Congress. But buried in the details of his latest government jobs bill released this week -- Spawn of the Spendulus, Porky's II, Night of the Keynesian Dead -- are yet more big green boondoggles that will reward cronies, waste taxpayer dollars and make no dent in the jobless rate.


Happy Hour: Smells Like Solyndra
Jon Stewart skewers the Obama administration on Solyndra. Was Solyndra actually looking at getting another loan from the federal government?.... So should taxpayers' count themselves lucky that Solyndra went bankrupt when it did - before the feds sank another $469 million into its solar power enterprise? Perhaps. Solyndra's SEC filing - dry reading for sure - can be read in its entirety by clicking here.


Despite Solyndra, Energy Department giving out loans faster than before
As the Solyndra scandal continues to dominate headlines, it looks like the Energy Department is continuing its program of giving out loans to clean-technology companies. However, as the Washington Post recently reported, payments to energy companies are now taking place at a FASTER rate than they were before. The Energy Department, under fire over its management of a program that offers loan guarantees to clean-technology companies, has been finalizing additional multimillion-dollar loan guarantees in the program at a rate of more than one a week since the beginning of August. It now has just two weeks left to commit the program’s remaining $9.3 billion. Since the start of August, the Department of Energy has closed seven loan guarantees, at a rate of more than one a week — after approving just 11 in the previous 26 months of the program.


WH Official Dismissed Solyndra Warnings as "B.S."
....Emails released Thursday night show that Obama administration privately worried about the effect of a default by Solyndra Inc. on the president's re-election campaign. "The optics of a Solyndra default will be bad," an official from the Office of Management and Budget wrote in a Jan. 31 email to a senior OMB official. "The timing will likely coincide with the 2012 campaign season heating up." The email, released by the House Energy and Commerce Committee as part of its investigation into the Solyndra loan, showed that Obama administration officials were concerned about Solyndra's financial health even as they publicly declared the solar panel maker in good shape.


Move Over Solyndra: Four More Government-Funded Flops
Well, well, well. It seems Solyndra isn't the only company to have crashed and burned, despite a massive injection of stimulus money. FoxNews reports that at least four other companies received government funding, and subsequently filed for bankruptcy. Adding insult to injury, two of these companies were supposed to create (or was it save?) "green jobs."

Evergreen Solar Inc., indirectly received $5.3 million through a state grant to open a $450 million facility in 2007 that employed roughly 800 people. The company, once a rock star in the solar industry, filed for bankruptcy protection last month, saying it couldn't compete with Chinese rivals without reorganizing. The company intends to focus on building up its manufacturing facility in China.

SpectraWatt, based in Hopewell Junction, N.Y., is also a solar cell company that was spun out of Intel in 2008. In June 2009, SpectraWatt received a $500,000 grant from the National Renewable Energy Laboratory as part of the stimulus package. SpectraWatt was one of 13 compaines to receive the money to help develop ways to improve solar cells without changing current manufacturing processes. The company filed for bankruptcy last month, saying it could not compete with its Chinese competitors, which receive "considerable government and financial support."

Oh yeah, and there hasn't been substantial demand for solar panels, so no one is buying the commodity we're producing expensively anyway. Minor detail.

My Take - For a fraction of the cost I could have predicted this disaster for them. Certainly not the details but the outcome was absolutely sure. Why? That is the simplist answer of them all. One of my favorite lines is that if you tell me the entire history of an issue I will give you the answer. We have gone through all of this before. From the economic boondoggles of the FDR administration to the complete and utter incompetance of the Carter administration. This green energy foolishness was another one of his many failures, which includes the creation of the Energy Department in 1977. But at least these guys could claim some degree of ignorance because these ideas hadn't really been tried before. This administration has no such excuse.

All of a sudden we expect people who have never in their lives had real jobs or run successful businesses tell those who have what they should be doing to be more successful.  People who have embraced economic philosophies that have failed consistently worldwide, and hate capitalism, are then expected run an entire economic system successfully.   Why would we expect these people to be successful?

We need to get this. You can't fix stupid, and when someone ignores the obvious facts of history in order to push an agenda that has failed over and over again they are either stupid or  _____________.(fill in the blank....this is a test!)


Also, you may wish to review last week's article, Warmers and Wilders.