Thought for the day!
by Rich Kozlovich


I have a lot of questions today. I have noticed that after a heavy rainfall water fills the low indentations in the surrounding landscape. I don't think that it is unreasonable to believe that this happens everywhere else in the world when it rains on a regular basis or if huge amounts of rain falls at once. We call them mud puddles!

I don't think that it is unreasonable to believe that everywhere else in the world these temporarily water filled indentations are called mud puddles also. For some reason those who go on and on about the temporary life that springs up in these mud puddles call them vernal pools. Why?

They claim that the temporary life in these vernal pools has species that need to be protected under the Endangered Species Act. I found this to be a bit confusing.  If their existence is based on the temporary "flooding" of their particular indent in the land; and they are going to disappear as soon as the sun dries out their own personal mud puddle; why then are they considered endangered? I would think that the presumption should be that they are supposed to cease to exist when that happens.

What if a drought should occur? Are we expected to carry water out in buckets and fill all of the indentations in the surrounding protected areas? If not, then how are they being protected? If we are not doing that, then the presumption must be that they aren’t really being protected at all!

If that is the case, then why bother claiming that they need to be protected in the first place, and from what? No rain! So, if adequate rainfall is the criteria for their survival; why should we believe that building a pipeline will prevent the rain from falling? Unless of course we are expected to believe that the rain will still fall, but building this pipeline will eliminate all the indentations in the topography that the rainwater would fill up in the protected area that the pipeline would intersect.

OK….so let me see if I understand this correctly. This pipeline needs to be stopped in order to protect this shrimp, because we are expected to believe that this pipeline will either stop the rain from falling or will eliminate the indentations in the topography so that the rain that might fall anyway cannot now fill the mud puddles …oops… vernal pools, therefore preventing their survival. Does that make any sense?

It would seem to me that it is of no particular importance if these shrimp die out or not because I would be willing to bet there are a whole bunch of other kinds of fairy shrimp out there to take their place. Extinction is the rule, not the exception; and since most of these people seem to be Darwinian evolutionists I wonder why they are rejecting their own beliefs regarding the survival of the fittest?

And in point of fact; doesn't it seem reasonable that they would be in favor of the extinction of these biologically incompetent species? Right?

It couldn't be that they have another agenda? Could it?


Quote of the Day
The Voluntary Human Extinction Movement believes that "phasing out the human race by voluntarily ceasing to breed will allow Earth's biosphere to return to good health". Deep Environmental Politics: The Role of Radical Environmentalism in Crafting American Environmental Policy" by Phillip F. Cramer, Praeger 1998, page 11.

(Editor's Note: You just gotta go to the Voluntary Human Extinction Movement site. Then I wish someone would please explain to me how these people can be considered rational or sane. RK)


The Obama administration is spending $35 million to buy 30,000 acres of private property across the U.S. this year to make permanent homes for mice, fairy shrimp, mussels, prairie bushes and beetles. Those are just some of the 70 critters and plants to benefit from the land purchases in a dozen states as part of the government’s habitat conservation plans for endangered species. “The federal government already owns more land than Germany, France, the United Kingdom, Spain, Italy and Poland combined,” said Rob Gordon, senior adviser for strategic outreach at The Heritage Foundation. 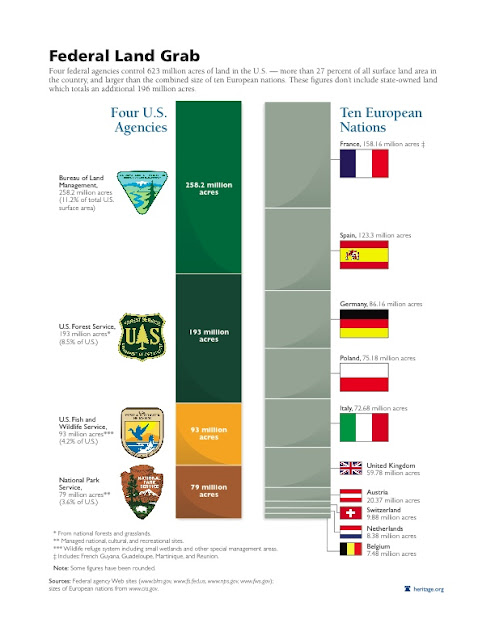 “We don’t need more for critters like the fairy shrimp that can thrive in fragile ecosystems like roadside ditches. We need less,” Gordon said. The federal government owns more than 600 million acres of land. The Fish and Wildlife Service, which manages the habitat for endangered species, already controls 93 million acres. That’s more than the National Park Service, which oversees 79 million acres. The San Diego fairy shrimp, as well as the Arroyo toad, coastal California gnatcatcher and Southwestern willow flycatcher, will benefit from one California habitat that spans 600 acres and costs $6 million. The fairy shrimp, crustaceans in the same taxonomic order as “sea monkeys,” are less than an inch in size and live in vernal pools that spring up after a heavy rainfall. Critics call the pools mud puddles……The vernal pool tadpole shrimp, along with the California red-legged frog and San Joaquin kit fox, will benefit from $4.4 million to buy 1,800 acres for habitat and wildlife corridors.


Stuff You Won't See on the News


How the Left Conquered Wikipedia, Part II: Coddling Progressives
Welcome to Citizendium, the alernative to Wikipedia
(Ed. Note: I happen to know that this stuff about Wikipedia is true from a personal experience expressed to me by someone who is featured there. He told me that he attempted to change the fallacious information a number of times. No matter how many times he changed it the same person who placed the information there in the first place kept putting it back, and if I remember this correctly he couldn't get satisfaction from the Wikipedia people. However, it is my personal view that Citizendium is difficult to use, especially as compared to Wikipedia. They have a long way to go if they are to compete.)


GENEVA — Creation is at the center of religion, and it is also at the center of a search, not for God, but for the "God particle."  In April rumors began that the $10-billion Large Hadron Collider near Geneva had found what it was built, in part, to find: the elusive Higgs boson, nicknamed the "God particle." It would have been a huge scientific breakthrough, but it looks now that the God particle may not exist after all.  "The Higgs really is the Holy Grail of particle physics and that's why this is so important," Phillip F. Schewe, a spokesman for the American Institute of Physics, told Associated Press back in April.  The particle is the missing puzzle piece in the Standard Theory of particle physics. It would help explain why matter has mass. "It has been dubbed the 'God particle,'" AFP reported, "because it is thought to be everywhere, but it has also proved agonizingly hard to find."...... Reuters reported that the collider has been creating "billions of miniature versions of the Big Bang." But so far, there has been no sign of the God particle that would have explained how mass and energy were connected to matter in the original Big Bang 13.7 billion years ago.

Kaku explained the importance of the God particle this way in a radio interview, "If we don't find the Higgs boson we are in deep trouble. We are in deep doo-doo. The reason is that the subatomic particles in the Standard Model are the basis, the foundation of everything we know about the Big Bang, everything we know about the universe, cosmic rays (and) black holes. So if that theory is wrong, then we are really in trouble. It means we have to throw out what is called the Standard Model — and even string theory would be in danger because string theory also has a Higgs boson. Steve Hawking, my colleague, said, "Well, if we don't find the Higgs boson things would be very interesting.' No. It will be a disaster if we don't find Higgs boson, because basically the entire edifice of modern physics depends upon it.".....But although the results are not positive, some are still holding to their faith in the God particle's existence. "It's never too early to think about it, but it is too early to worry," Nobel Prize-winner Frank Wilczek of the Massachusetts Institute of Technology told New Scientist.

This article is about the scientific concept. For the substance of which all physical obects consist, see Matter. For Other uses, see Mass (disambiguation).

In physics, mass commonly refers to any of the following three properties of matter, which have been shown experimentally to be equivalent:

Mass must be distinguished from matter in physics, because matter is a poorly-defined concept, and although all types of agreed-upon matter exhibit mass, it is also the case that many types of energy which are not matter—such as potential energy, kinetic energy, and trapped electromagnetic radiation (photons)—also exhibit mass. Thus, all matter has the property of mass, but not all mass is associated with identifiable matter...... There is more.  Follow the link. RK

This article is about the concept in the physical sciences. For other uses, see Matter (disambiguation).

Matter is a general term for the substance of which all physical objects consist. Typically, matter includes atoms and other particles which have mass. A common way of defining matter is as anything that has mass and occupies volume. However, different fields use the term in different and sometimes incompatible ways; there is no single agreed scientific meaning of the word "matter".........There is more.  Follow the link.  RK

In physics, energy (Greek: ἐνέργεια energeia "activity, operation" is an indirectly observed quantity. It is often understood as the ability a physical system has to do work on other physical systems. Since work is defined as a force acting through a distance (a length of space), energy is always equivalent to the ability to exert pulls or pushes against the basic forces of nature, along a path of a certain length.......There is more.  Follow the link.   RK

Posted by Rich Kozlovich at 4:09 AM