...
“De Omnibus Dubitandum”
Everything we are told should bear some resemblance to what we see going on in reality.

Right now, someone is sitting at a large oak table in the EPA’s marble palace in Washington, D.C., sipping a vanilla latte and dreaming up a new rule to impose. Without fail, the EPA continues to come up with ideas that leave you scratching your head in wonderment because of the questionable science used to justify these regulations. Instead of protecting the environment, these rules dreamed up by the EPA in Washington are destroying American industry and killing job creation, which is just what our economy needs right now. This type of federal meddling is exactly what causes companies to lay off workers, move overseas, and in many cases, fail. The purpose of the Environmental Protection Agency is to protect the environment—not to regulate American industry into nonexistence.

My Take –All of this was obvious to the most casual observer years ago, and I have been saying this for years, which usually resulted in rolled eyes, snorts, laughs and shaking heads. Unfortunately there were only a few of us that would quality as “casual observers” for a long time. Now we even have Newt Gingrich calling for their elimination because he believes that the EPA can’t be reformed. The laughter has stopped because reality has finally set in. The EPA in not now, nor has it ever been anything but an anti-chemical, anti-industry, anti-business political entity filled with irrational environmental activists (in both permanent and appointed positions) working to undermine everything that makes modern life possible by disguising itself as a scientific agency.

EPA Shuts Down Drilling in Alaska Shell announced today, for now, it must end a project to drill for oil off the coast of Northern Alaska, because of a decision made by an EPA appeals board to deny permits to acknowledge that Shell will meet air quality requirements. This is not part of ANWR.  Companies that drill for oil must go through extensive permitting processes and invest billions of dollars as payments for leasing the land, exploring for possible oil fields, equipment, etc. This is all done with the understanding that assuming they follow the letter of the law, there is a chance that this investment won’t be flushed down the toilet at the end of the tunnel. It appears that in this case Shell has followed procedure and that emissions will be below any standards required by the EPA:

Sad but true: JunkScience predicts Shell drilling permit fiasco As predicted in print by Steve Milloy more than a year ago, Shell Oil’s Arctic Ocean drilling permits have been blocked by the EPA…… A slipshod EPA permitting process — most likely intentional — set up the credulous Shell for failure. Sad but entirely predictable.


The Last Days of Ethanol? The alternative fuel finds political foes on the far-left and right. 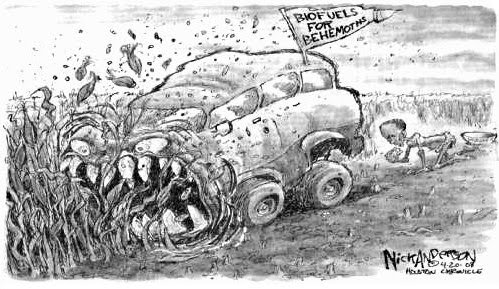 My Take – Another stupid greenie idea.  And another one of their stupid ideas they oppose once it's implemented.  The worst part of this story is that all of the problems being caused by bio-fuel production was easily predictable.  Except to the greenies and the idiots who follow them!

The greenies love technology that doesn’t exist. They hate that self same technology when some poor fool of an industrialist implements it. Ideas that will never fill the void left by the elimination of oil. The greenies are clueless….why don’t we get that?

In this case this stupid idea has caused immense harm. People are paying higher prices for basic food staples and energy everwhere in the world, and in some countries that is a death sentence for many people, especially the children. All of these uprisings in the Middle East are a direct result of this. So much for their claims that what they do is "for the children"! It is more like what they "do to the children".

Question - Has anyone been more responsible for more unnecessary illnesses and deaths of children all over the world than the greenies?

Birds versus windmills again: Birds win one Long live the whooping crane and the piping plover! A couple of major players in wind energy are tangling over the cancellation of a big project in North Dakota. Xcel Energy is pulling out of the wind farm, a step its partner, enXco said it will challenge.  The $400 million, 150-megawatt Merricourt Wind Project is supposed to be built this year in southeast North Dakota, but construction is in doubt now, after Xcel Energy announced that it's rescinded its agreement to be part of the project.

What happens when the great fantasies, like wind power or European Union, collide with reality? It might seem strange to link global warming and the futility of wind farms with the ongoing collapse of the euro. But in several directions at the moment we can see the unfolding of one of the hidden patterns shaping human affairs, which years ago I called “the fantasy cycle”. It is a pattern that recurs in personal lives, in politics, in history – and in storytelling.

My Take - This is why “green” is doomed. The greenies hate capitalism, hate capitalists and hate technology. They have stated over and over again that the world can only be saved by the elimination of capitalism and all that goes with it. Capitalism and environmentalism, as practiced by modern greenies, are completely antithetical to each other. Greenies want to return to the stone ages and capitalists want economic and industrial growth. How can there possibly be a meeting of the minds under those circumstances? 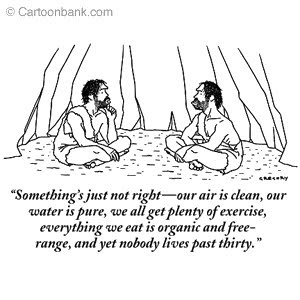