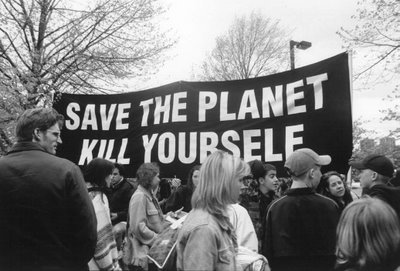 What Greens Really Believe Earth Day was established in 1970 and millions of Americans and others around the world have been steadily brainwashed to embrace the impression that environmentalism is about protecting the Earth, but when Greens talk among themselves, it is a very different story and a frightening one at that.

What most people are unaware of is the fascistic hatred of mankind that underlies the philosophic basis of environmentalism.  (Make sure to follow this link.  RK)

My Take - For those who have been following, researching and writing about the green movement this is old news...and frightening. For most people this is new...and frightening, but this is nonetheless....reality. Some have claimed in the past that this is merely hyperbole to promote certain actions and not meant to be taken literally. Horsepucky! I could buy into that except that everywhere in the world where green policies and ideas have been put in place dystopia followed.

As Alan has pointed out; everything they promote undermines life as we know it. To assume that this isn't what they want is to ignore everything they say, everything they promote and ignore all the terrible things that has happened in the past due to their actions. Did they ever recant anything? No...They moved on and tried to implement these same kind of ideas elsewhere at a different time. To be green is to be irrational and misanthropic.  We need to get that!

Bird Deaths from Wind Farms to Continue Under New Federal Voluntary Industry Guidelines “Federal government estimates indicate that 22,000 wind turbines in operation in 2009 were killing 440,000 birds per year. We are very concerned that with Federal plans to produce 20 percent of the nation’s electricity from wind by 2030, those numbers will mushroom. To meet the 2030 goal, the nation will need to produce about 12 times more wind energy than in 2009.”

Wind Turbines Continue To Kill Birds “Wind turbine operations in the Altamont Pass kill as many as 9,600 birds each year, including many species that are fully protected by state and federal laws,” said Mike Lynes, Conservation Director for Golden Gate Audubon. “While we support responsible development of alternative energy resources, we cannot maintain the status quo in the Altamont without risking local bird populations. If wind energy generation is to remain in the Altamont Pass, the old wind turbines that cause the most mortality must be replaced with new turbines that are safer for birds.”

My Take – This information goes back away, but this issue is this; another stupid greenie idea is having a more negative impact on the environment than anything the greenies protested. Wind farms take up huge amounts of space. They kill birds, and I don’t believe they alter the design enough to change that. Since the wind doesn’t blow all the time back up standard power plants are needed to be in place. In spite of everything they claim wind power cannot compete with standard power without subsidies. The turbines break down with a regularity that is startling. The cost of construction is high and the rare elements needed for their production causes more environmental damage. They are noisy. Oh….and did I mention that they kill birds?

Wasn’t that the reason given by Rachel Carson to condemn DDT? I know, I know….she didn’t actually call for the ban, but let’s get real. What other conclusion could you draw from her work? So spare me the intellectual dishonesty.

Hydrocarbons Could Form Deep In the Earth From Methane, Not Animal Remains
Study lends credence to abiogenic petroleum theory, which means there may be more oil inour future than we thought.

My Take – For those who used to get Green Notes, you already know that I subscribe to the abyssal abiotic theory of petroleum. Below is an article from 2002 that explores both views. The fact of the matter is that we have been getting predictions of energy doom since 1950. The reality is that we keep finding and using far more oil than was supposed to exist. We will never run out of oil. Exploring spacecraft have discovered hydrocarbons on a moon of another planet….and there are no dinosaurs or bio-organic material there.

Hedberg to Get to the Nub of the Matter 11/11/2002 The AAPG Hedberg Conference on the "Origin of Petroleum -- Biogenic and/or Abiogenic and Its Significance in Hydrocarbon Exploration and Production," will be held June 9-12 at the Institute of Petroleum in London. Organizers said the conference is designed to provide an opportunity to present the hypothesis, evidence and data for an organic origin of petroleum and for an abiogenic origin of petroleum through oral and poster sessions, with ample time for discussion and debate. Day 1 will deal with the origin question. The significance of each through case study exploration strategies using both models will be the focus of Day 2. Day 3 will deal with petroleum migration under both origin scenarios.

(Was this resolved at this 2002 conference. Yes! It has been confirmed! Each side still thinks they are right! RK)

Climate U loses bid to stifle critic. James Delingpole, a take-no-prisoner blogger with the Daily Telegraph, has been a relentless critic of the university and the professor at the heart of the scandal, Phil Jones. In an attempt to curb Delingpole’s blog posts, the university lodged a complaint with the UK Press Complaints Commission, an independent body. The Commission’s decision, just out, is a crushing repudiation of the university’s attempt to manage dissent that could strike a blow for free speech everywhere.