The world has been chilling sharply for about twenty years. If present trends continue, the world will be about four degrees colder for the global mean temperature in 1990, but eleven degrees colder in the year 2000. This is about twice what it would take to put us into an ice age. - Kenneth Watt, Ecologist - 1970

Earth Day Predictions of 1970. For the next 24 hours, the media will assault us with tales of imminent disaster that always accompany the annual Earth Day Doom Gloom Extravaganza.

My Take - Fool me once shame on you! Fool me twice shame on me! The greenies have been wrong from Malthus to Ehrlich. In fact...they almost have a monopoly on wrong.

In the early years of the green movement it is understandable that we should all buy into environmental concerns....they were valid. Let's face it. The fish were dying in Lake Erie by the tens of thousand, the Monongahela River (the Monongahela and the Allegheny meet in Pittsburgh to form the Ohio) was pretty much deviod of life and tasted like surfur, and it is a big river. Those were before the movement was taken over by socialists. That was when a clean environment was what they were really concerned about. Those days are gone!

We now have a track record for their claims, their scares and the outcome of their policies. Their record in the early years may have been laudable, but that doesn't give them a buy on the rest of their life.  Its what I call the "Hitler made the trains run on time" logical falllacy.  So what!   Everything since then has been irrational and misanthropic. Dystopia follows green like a cloud of dirt follows Pigpen.

Going Green by Starving America of Oil The most suicidal energy policies a nation has ever imposed on itself. A gallon of regular gas in Caracus,Venezuella, costs 12 cents. In Saudi Arabia, gas is at 91 cents a gallon. So, why, when we have more fossil fuel deposits in America on shore and off shore than either of those countries, are we paying $4.00 a gallon or higher? Could it be unbounded politics?

As an op-ed piece in the Wall Street journal put it: “For decades—going back to Jimmy Carter—politicians have been peddling an America free of fossil fuels…” President Obama has raised the anti-petroleum ghost to a new level of fear linked to the misguided theory of global warming.

To satisfy his left-wing base of narrow-minded environmentalists, along with his own twisted ideals, Obama’s administration has blocked drilling for oil and gas, proposed new taxes on oil companies, and called for costly restraints on carbon emissions while persistently touting the ethereal promise of green energy……. They claim companies are sitting on scores of leases that could be used to search for oil. Obama said in a speech that the industry “holds tens of millions of acres where its not producing a drop.” But the problem is not with leases. It’s with permits. Permits have been tied up with over-burdensome regulations. Again, Obama speaks with a forked tongue.

Adding a spit in the face to industry, the Administration saw fit to lend $2.84 billion to Columbia for an oil refinery, it was revealed April 19. According to reports, the money would go to Reficar, a wholly owned subsidiary of Ecopetrol, the Columbian national oil company. This is part of a $5 billion refinery upgrade project supplying petroleum, products for domestic and export purposes. Who knows what energy misdeeds lie ahead?

Sterilizing Those Pesky Humans: Earth Day with Paul Ehrlich The dark, hateful and racist world of a living symbol of Earth Day……..That brings me to a living symbol of Earth Day: Paul Ehrlich. Dr. Ehrlich’s explosive bestseller, The Population Bomb, inspired the freshman class that first Earth Day, embodying the wildest fears of apocalypse mongers. The great Johnny Carson was, sadly, one of Ehrlich’s dupes, giving him a platform on “The Tonight Show” dozens of times.

Much has been said about Ehrlich’s book. But as author John Berlau reports, one item has been conveniently sunk into a land-fill. “He [Ehrlich] flirted with a proposal to require adding contraceptive material to all food items in the United States,” writes Berlau in Eco-Freaks.

My Take – Over the years I have said that the green movement is irrational and misanthropic. It doesn’t seem to matter how many times I say this….people just don’t get it. The greenies believe that mankind is a virus, just as Lenin believed people were “harmful insects” and disposable. By their actions and policies we have to see that all parts of the left hate humanity while declaring themselves the greatest of humanitarians. Everything we are told should bear some resemblance to what we see going on in reality. We have to see past the rhetoric and he lies of a corrupt media.

Three More Attacks on Civilization....Most consumers are clueless as to how sometime in the last year, their dishwashers stopped working properly. They call in the repairman, who fiddles with things and announces a fix. But it is not fixed. The glasses are gritty and the plates often need to be rinsed again after washing. Many households have bought new machines or resorted to just running the dishes through twice. The creation of phosphorous-free detergent is the real reason…… Now, it is clear that the law's proponents knew exactly what the results would be. It would increase dishwasher use and even end up leading people to abandon dishwashers altogether, and either solution leads to much more water and energy use. In other words, even by the goofy environmentalists' own standards, this is no savings. It might end up in the reverse.

Studies since the ban have even shown that phosphorous reduction in the Washington State river is entirely due to a new filtering system and, further, that it turns out that the phosphorous in the river was not even a problem in the first place!

Trying to Avoid Greenie Regulations? The Department of Energy is Not Amused" efficiency standards" tend to upset people, as it usually leads to products being outlawed that people really like.  What happened was that certain showerhead manufacturers were taking a bit of creative license in interpreting the definition of a "showerhead," and selling showerheads that (by the DOE's standards) exceeded the maximum allowable 2.5 gallons per minute. 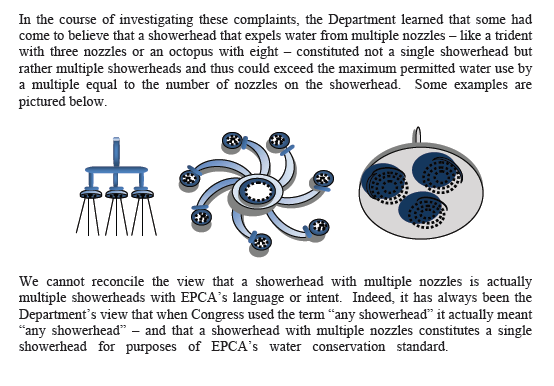 My Take – Another good reason for dumping an expensive, unnecessary and incompetent department of the government.  Why incompetent?  Their job originally was to find alternative energy sources that really worked.  I don't remember a thing about their need to regulate shower heads.  Then again....I have yet to figure out why the federal government believed they had the right to regulate how much water was used in a toilet.  Now if we can just get them to believe that one of their real jobs is to fix the bridges and raods.  By the way…..Jimmy Carter created the Department of Energy.  Nuf Ced?

Email ThisBlogThis!Share to TwitterShare to FacebookShare to Pinterest
Labels: DOE, Earth Day, Jimmy Carter, Misanthropy, Observations From the Back Row