Diversity is our strength so it couldn’t have been too shocking that an Afghan Muslim refugee was responsible for America’s single worst Islamophobic killing spree. Much as another Afghan, Omar Mateen, brutally carried out the single largest massacre of gay people in America. 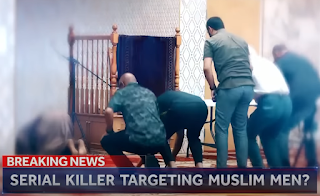 When the migrant surge began, politicians and the media assured us that Afghans would make profound contributions to America. They have already set two particularly ugly national records.

And that was bound to happen.

Long after the last American soldier had left Afghanistan, the fighting between Sunnis and Shiites continues in the terrorist state with ISIS-K carrying out bombing attacks on Shiite mosques.. The massive influx of Afghan refugees to America has brought the bloody ethnic, tribal and religious clashes from that failed state to America.

Including the true and undiluted Islamophobia that only Sunnis and Shiites are truly capable of.

“I am angered and saddened by the horrific killings of four Muslim men in Albuquerque,” Joe Biden had tweeted. “While we await a full investigation, my prayers are with the victims’ families, and my administration stands strongly with the Muslim community. These hateful attacks have no place in America.”

"The targeted killings of Muslim residents of Albuquerque is deeply angering and wholly intolerable," Governor Michelle Lujan Grisham tweeted. "We will continue to do everything we can to support to the Muslim community of Albuquerque and greater New Mexico during this difficult time. You are New Mexicans, you are welcomed here, and we stand with you."

CAIR offered a $10,000 reward for the perpetrator of the "hateful shooting spree" and demanded that Biden make it his responsibility to "protect Albuquerque Muslims from further harm". But when the perpetrator turned out to be a fellow Sunni Muslim, CAIR is no longer describing his actions as “hateful”, but “deranged”. Soon he’ll be dismissed as mentally ill.

The media was even less circumspect, interviewing local Islamists who claimed that they feared American intolerance and the media warned that "another Islamophobic attack could happen".

The killing of four Muslim men from "South Asia", the last of them outside a Lutheran Family Services refugee services office, was indeed Islamophobic in the most traditional way.

The alleged perpetrator, Muhammad Syed, a Sunni Muslim refugee from Afghanistan, was reportedly angry at his daughter’s marriage to a Shiite Muslim.

And took it out on some local Shiite Muslims in Albuquerque which is now the new Afghanistan.

Since the withdrawal, four Afghan refugees have been accused of sexual assault, two involving children and two involving adult women. Some 324 Afghans with terror ties have popped up on watchlists. And that’s just the tip of the iceberg that we actually know about.

In the 6 years since he arrived in America, Syed had racked up quite a record.

In 2017, the Afghan Muslim refugee, along with his wife and son, had been accused of assaulting his daughter's boyfriend. That was in 2017. Next year, Syed was accused of grabbing his wife by the hair and throwing her out of the car. Then he allegedly attacked her at a Human Services office and pulled out "a large chunk of hair" from her scalp.

That same year, his son called the police claiming that Syed had been beating his mother, while he and his sister tried to hold him back. The beating left the younger Syed covered in blood.

By 2020, Syed was allegedly busted for refusing to comply with police orders after running a red light. Police reports indicate that four years after coming to America, Syed still only spoke "pashto" except for apparently the term "mother______r".

Syed may not have enriched our culture, but we had clearly enriched his.

"I am deeply disturbed by the killings of four Muslim men in Albuquerque. As law enforcement continues to investigate these heinous attacks, we remain clear that we stand with the Muslim community in New Mexico and around our country. Hate has no place in America," Kamala Harris had tweeted.

Hate has a huge place here and Kamala and her boss have made plenty of room for it.

Syed’s killing spree wasn’t domestic terrorism as we understand it. The Afghan Muslim refugee, who told police that he had fought in his country’s special forces, was settling communal grudges and disputes the same way that his countrymen usually do.

Men beating wives and family members isn’t unusual in Afghanistan. Neither is responding to a daughter’s rebellious relationship with murder. The case is only notable because it’s in America.

And because top elected officials, including Biden and Kamala, are in denial about it.

Democrats frequently remind us that other Muslims are the leading targets of Muslim terrorism. That’s true insofar as Islam has a rich 1,360 year history of fatally settling theological differences. The world’s greatest ‘Islamophobes’ are Muslims who have been killing each other and members of variant sects because, beginning with Mohammed, for most of their history the inherent violence of Islam leaves few other options for resolving religious differences except “submission”. Cultural differences end with slavery, forced marriage, repression and genocide.

In the decades since the Islamic terrorist attacks of September 11, Biden, Kamala, local officials in New Mexico and most of the country's political elites and cultural establishment have learned to respond to Islamic violence with cries of Islamophobia. But what happens when Islamic violence is no longer being directed at Americans, but at other Muslims?

Americans are some of the least hateful people in America. Polls and surveys show that we are less racist, more tolerant of religious differences, and more willing to share spaces with people who are different than they are than most of the rest of the world.

And, it ought to go without saying, Afghanistan.

Taking in massive numbers of Afghan Muslim refugees has had the opposite effect. Multiple Afghan refugees have already been caught up in ordinary domestic physical and sexual offenses. And that’s just the recent arrivals, not longtimers like Syed in New Mexico.

The mass migration of Afghans to America means that we now have to police cultural, gender, and religious disputes in a population that could not, even with our extended help over the course of two decades, settle those differences in their own country. Now we have been cursed with the even more hopeless task of trying to settle Afghan differences in America.

The Albuquerque killings, like the assaults on military bases housing refugees, and the sexual assaults off those bases, is a warning of the scale and hopelessness of the task before us.

From Omar Mateen, the perpetrator of the second deadliest mass shooting in America at the Pulse nightclub, to Muhammad Syed, Afghan immigration means violence, terror and death for everyone as the norms of a deeply broken culture pop up in cities like Albuquerque.

Syed, who violently clashed with his family members and had repeated run-ins with the law until his violent impulses allegedly turned lethal, is not an outlier, he is the face of the future.

What happened in Albuquerque is just what happens when Afghanistan comes to America.
Daniel Greenfield is a Shillman Journalism Fellow at the David Horowitz Freedom Center. This article previously appeared at the Center's Front Page Magazine. Click here to subscribe to my articles.  Thank you for reading.
Tags: Afghanistan, immigration, Islamophobia, recent, Terrorism
Posted by Rich Kozlovich at 8:42 AM