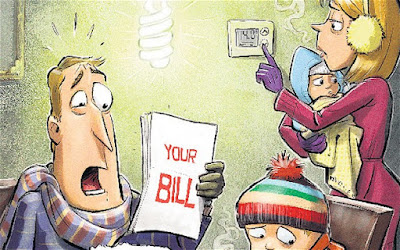 The latest story on “green energy” here at the German online FOCUS magazine actually shocked me. Europe’s energy policy is, under the bottom line, costing the lives of tens of thousands of citizens – all at the holy altar of “climate protection”. FOCUS reports: In 2014 in Europe there were about 40,000 winter deaths because millions of people were unable to pay for their electric bills – the so-called energy poverty currently impacts about ten percent of all Europeans.  In the past 8 years the price of electricity in Europe has climbed by an average of 42 percent. The consequences of energy poverty are profound: tens of thousands of deaths every year, millions losing their power. --Pierre Gosselin, No Tricks Zone, 29 March 2016

The fact that Germany is a world leader in green power is by now familiar. Much less familiar is the price the country is paying for it, not just in cold hard cash, but in growing losses and dislocations across the entire economy. The losers include once-stalwart utility giants like E.ON and RWE that are struggling with rising debt and falling shares. Manufacturing companies, from chemicals maker BASF to carbon fiber producer SGL Carbon, have shifted investments abroad, where energy costs are often a fraction of Germany’s. Losers include laid-off workers in these industries, but also millions of ordinary consumers. Their utility bills have skyrocketed, largely driven by subsidies for eco-friendly fuels. Germany’s “green” revolution has a dark shadow. --Gilbert Kreijger, Stefan Theil and Allison Williams, Handelsblatt, 24 March 2016
European global warming policies are hurting the continent’s poor, according to a Manhattan Institute study published Thursday. Europe has tried to fight global warming with cap-and-trade schemes and lucrative financial support to green power since 2005. Though well-meaning, the continent’s environmental efforts have only made life harder for Europe’s poor. Between 2005 and 2014, residential electricity rates on the continent increased by 63 percent according to the study.  European-style global warming policies hurt the poor 1.4 to 4 times more than they hurt the rich, according to a study by the National Bureau of Economic Research. --Andrew Follett, The Daily Caller, 25 March 2016
Since 2005, members of the European Union have aggressively pushed policies aimed at addressing climate change. Those policies are primarily designed to decrease carbon-dioxide emissions and increase the use of renewable energy. At the same time, several European countries are restricting the production of natural gas and, in the case of Germany, aiming to phase out nuclear energy. These policies have resulted in dramatic increases in electricity costs for residential and industrial consumers. Although the E.U. has seen a reduction in its carbon-dioxide emissions since 2005, those reductions pale in comparison with increases in the developing world. The observable results from Europe thus offer a cautionary tale to policymakers in the United States who seek to tackle climate change via government mandate. --Robert Bryce, Manhattan Institute, 24 March 2016


Steel giant Tata is holding a board meeting in India which could decide the fate of thousands of UK workers. In January, Tata said it planned to cut more than a thousand jobs at its UK plants - with 750 due to be lost at Port Talbot in south Wales. Unless the board meeting in Mumbai agrees to this turnaround plan, the future of the plant could be in doubt. The UK steel industry has been hit by a combination of factors that have hit its competitiveness. These factors include relatively high energy prices, the extra cost of climate change policies, and competition from China. --BBC News, 29 March 2016
Posted by Rich Kozlovich at 3:58 AM