I had a very nice Naomi in my early life -- Naomi Holbeck. I sometimes wonder where she is now.  But the Naomi I want to talk about here is a much less pleasant Naomi:  Naomi Oreskes, one of the many climate frauds. 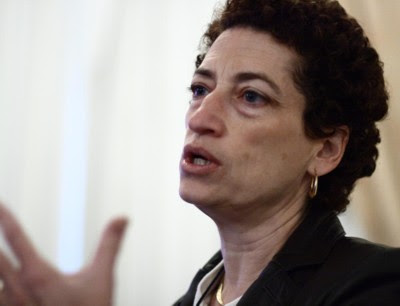 Something that often gives liars away is that they exaggerate.  They seem to believe Dr. Goebbels' dictum that big lies are more credible than small ones.  The classic example of that is the many elections that various Communist dictators ran in the 20th century.  They would always claim that  they won 98% or thereabouts of the vote.  Nobody believed them of course.

So when Warmists claim that 97% of scientists believe in global warming, historically aware people know how to view that.   It's not even a sophisticated lie.  Some industrious person has put together a list of 97 published rebuttals to John Cook's 97% claim but it was hardly necessary. One wonders how Cook feels to have his work so swingeingly attacked. I suppose he just wears the usual Leftist carapace of Freudian denial.

But the biggest liar of all was Naomi Oreskes. What she claimed in 2004 was TOTALLY unbelievable. In an article in "Science" magazine she claimed to have done a study of the scientific literature on climate change and found that "none of the papers disagreed with the consensus position".  In other words she claimed 100% agreement.  She was less truthful than even a Communist dictator.  There were already known in 2004 some prominent scientists who were vocal climate skeptics such as Richard Lindzen and Fred Singer.  So Oreskes was plainly wrong in claiming that she could find none of them.

The reason I am raking over such old history now is that her work falls neatly into a modern area of scientific concern.  In both the social and biological sciences there has been lately a lot of heartburn about unreplicable results.  Replication is the test of a scientific claim and it is the central reason why academic articles are so turgid.  A believable scientific claim has to go into great detail about how it reached its conclusion so that others can do exactly the same thing to test those conclusions.  If someone repeats exactly what an author did and gets DIFFERENT conclusions, a great lightning bolt falls from the heavens and incinerates the original author.  Just joking!  But the effect is not much less than that.  Nobody believes the original claim any more.

And in recent times there have been many attempts to do such exact replications.  And the results have been terrible.  Around two thirds of established scientific findings in the social and biological sciences have been found to fail replication.  Much of what we thought we knew is false.

And the Oreskes claim failed replication.  Benny Peiser was one of many who found the Oreskes claim laughable but he was the one who put his money where his mouth was and actually made an attempt to replicate the Oreskes procedures.  He got vastly different results.  So by modern scientific standards, the Oreskes findings are wrong and should not be quoted as support for anything.

So if anybody now quotes the Oreskes finding without attaching the word "unreplicable" to it, they thereby show that they are out of step with modern scientific standards.

But Warmists abandoned science long ago, of course.  In their major papers they withheld details that would allow replications of their work.  And when other scientists asked for the withheld details, the Warmists refused point blank to assist.  They branded such requests as "harassment".  Their response actually made replication unnecessary.  It revealed that they themselves knew their work to be fraudulent.

But Naomi has won great honor and glory for her work.  Far from being discredited, she has risen greatly in the world.  She is now a professor at Harvard.  With almost total Leftist control of the media, the bureaucracy and the educational system, the modern world floats on a sea of lies and Naomi is just one of many frauds -- which is why you get Donald Trump, the only prominent figure bold enough to trash completely the Left-led consensus.
Posted by Rich Kozlovich at 3:30 AM