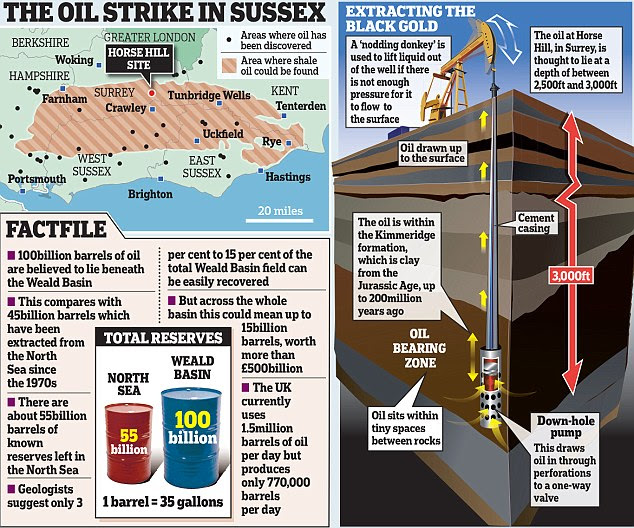 The Gatwick Gusher has produced the highest flow rates of any onshore wildcat well in the UK, matching the kind of levels normally seen in the North Sea, its majority owner UK Oil & Gas said. The exploration company said it had completed its final test at Horse Hill, just north of Gatwick Airport, and that the aggregate flow from three layers of oil-bearing rock had been 1,688 barrels per day. “The flow test results are outstanding, demonstrating North Sea-like oil rates from an onshore well,” said UKOG executive chairman Steve Sanderson. “This simple vertical well has achieved an impressive aggregate oil rate equivalent to 8.5 per cent of total UK onshore daily oil production. --Nick Goodway, The Independent, 22 March 2016

U.S. natural gas production is on the rise, with some reserve areas in the country’s Northeast getting more output from fewer wells, an industry report found. “The natural gas production record achieved in February is largely attributed to the Northeast, which also is still helping offset the declines seen in other major U.S. basins,” Sami Yahya, a Platts Bentek energy analyst, said in an emailed statement. According to its estimates, the February gas output level is the highest since it started keeping records in 2005. --Daniel J. Graeber, UPI, 23 March 2016

Three months since the U.S. lifted a 40-year ban on oil exports, American crude is flowing to virtually every corner of the market and reshaping the world’s energy map. The "growing volumes of exports" from the U.S. are now "spooking the markets," Amrita Sen, chief oil analyst at consultants Energy Aspects Ltd. in London, said in a note. With American stockpiles at unprecedented levels, oil tankers laden with U.S. crude have docked in, or are heading to, countries including France, Germany, the Netherlands, Israel, China and Panama. Oil traders said other destinations are likely, just as supplies in Europe and the Mediterranean region are also increasing. --Javier Blas, Bloomberg, 18 March 2016

The geopolitics of oil have always been deeply murky. It does not seem outlandish to speculate, however, that part of Russia’s surprise decision to withdraw some military support for President Assad may have been linked to another foreign policy priority — its continuing co-operation with Saudi Arabia and other Gulf nations to shore up the price of oil. Next month Russian officials will sit down in Doha with their Saudi and Qatari counterparts, who have fiercely opposed Russian action in Syria, to discuss a freeze in output levels. --Robin Pagnamenta, The Times, 22 March 2016

The world focused its attention recently on Cheniere and the United States’ first liquid natural gas export. But the more telling story actually lies behind the scenes and stems from the state-controlled Russian corporation Gazprom. Over the course of the past six months, the company has begun to experiment with what it deems to be a new pricing strategy driven by conventional market forces, in which the company auctions off natural gas in a competitive marketplace. Gazprom is effectively deviating from their standard pricing convention, whereby the commodity’s price is indexed or linked to oil via a long-term contract. While it is true that this week’s announcement focuses only on a small sub-sector of the company’s clientele — the Baltic States of Lithuania and Latvia — the geopolitical implications are profound. --Oil Price, 22 March 2016

Investors have suffered losses of at least $150bn in the value of oil and gas company bonds, as the slump in crude prices since the summer of 2014 has fuelled fears of a wave of defaults in the US and emerging markets. The 300 largest global oil and gas companies have also seen $2.3tn sliced from their stock market value over the same period, a 39 per cent slide since oil began its decline, an analysis by the Financial Times has found. --Eric Platt, Ed Crooks and Laura Noonan, Financial Times, 21 March 2016
Posted by Rich Kozlovich at 6:38 AM