By Jon Ray in Dissecting Leftism.

The following paragraph was written by Nancy Gertner, a retired US District Court judge, and a professor at Harvard Law School:


"Nothing prevents the Sanford police from critically evaluating Zimmerman’s account, as police do in so many situations, and concluding that it was contradicted by the girlfriend’s account, by 911 tapes of other bystanders shortly before the killing, that it makes no sense for Martin to start a fight since Zimmerman obviously had a gun in a holster, was substantially larger than Martin, since the encounter took place close to where Martin was staying and he was moments away from safety."

She's accepted uncritically the relevance of all those pretty media pictures showing Martin when he was about 12 years old. She really thinks that Zimmerman was the tall one -- when in fact Martin was 6" taller than Zimmerman.

What a clown she is! If that's what passes for proper judicial scrutiny at Harvard, we are all in big trouble. Anybody who appeared before when she was a judge and lost his case should take a screenshot of her original article above and use it to petition for a re-opening of his case.

I've got a question for the learned lady. What would she feel if she found the guy in the photo below looking down on her on a dark night?  Because that's a picture of the 17 year old 6'3" Trayvon Martin that Zimmerman encountered. And don't forget that it is she, not I who said that height is important.

The first time I saw the media pictures of Martin and then read his age I smelt a rat. Blind Freddy would know that a normal black male would be at or near full physical maturity at age 17 -- as Martin indeed was -- so why were they showing pictures of what looked like a 12-year-old kid? Easy answer: The whole thing is a media beatup designed to sell newspapers. And people lacking in critical thinking ability -- such as Harvard faculty -- fell for it hook line and sinker.

And if you think it's not a beatup consider the two cases below for contrast: 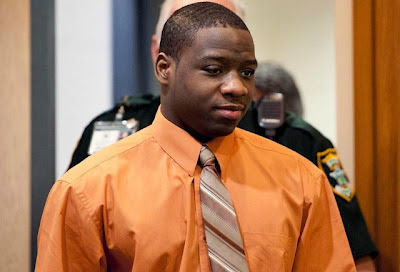 Shawn Tyson (above) was sentenced this week for murdering two white British tourists in Florida. No rallies against violence and no charges of racism. Tyson even referred to his victims as "crackers" so it was a clear hate crime.

Terry Moore, 32, was beaten this week by a mob of black males. Again, no rallies against racism; no public outpouring of support for the victim. Such black-on-White violence is the norm and only rarely makes it to anything but local headlines.