This is part of Alan's expose on the environmental movement leading up to Earth Day. Alan can be followed at Warning Signs, where he posts daily. RK 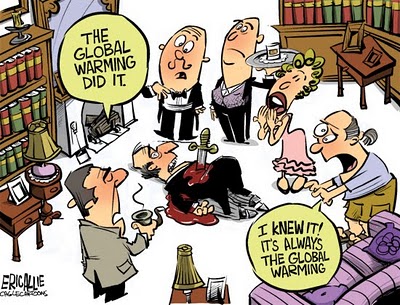 In 1517 Martin Luther set off the Protestant revolution against the Catholic Church that led to the spread of the then-new movement as a response to the corruption of the Church. It took time for it to establish itself as an alternative and was greatly aided by the invention of printing and spread of literacy, but mostly because ordinary people had grown weary of the Church’s extravagance, poor governance, and resistance to change.

The selling of worthless “indulgences” as a means to wipe one’s sins clean was the final straw.

Environmentalism has become a modern religion and its “cap and trade” scheme to sell worthless permission slips for the emission of so-called “greenhouse gases”—based on United Nations Kyoto Protocol calling for a reduction of carbon dioxide (CO2) in the Earth’s atmosphere—is being rejected by many nations .

As it has become common knowledge that CO2 is vital to all life on Earth and plays no role in affecting the climate, ordinary people have concluded that global warming in particular and environmentalism in general is a giant fraud.

No one argues that nations should not attend to the basic maintenance of clean air and water. That view predates the environmental movement, but the stranglehold on nation’s economies and the ability to engage in any form of commerce has reached a breaking point. The fact is, the U.S. has made great strides over the years and there are limits to how “clean” the air and water can or even should be. The EPA wanted to regulate “dust” at one point until Congress put an end to that insanity.

The lies required to maintain environmentalism and its vast matrix of laws and regulations are being publicly rejected and a recent example is a letter sent to NASA administrator by fifty present and former astronauts, scientists, and engineers who work for NASA is a seminal moment, not unlike Martin Luther’s 95 theses nailed to the door of the castle church in Wittenberg.

The NASA employee’s letter demanded that its Goddard Institute for Space Studies (GISS) “refrain from including unproven remarks in public releases and websites. We believe that the claims of NASA and GISS, that man-made carbon dioxide is having a catastrophic impact on global change are not substantiated, especially when considering thousands of years of empirical data.”

It should be noted that the global warming hoax can be dated to testimony by James Hansen before Congress in 1988 and he is still the GISS administrator! His apocalyptic predictions helped launch a U.S. response currently seen in the Environmental Protection Agency power-grab, based on the false CO2 claims, that will eliminate one fifth of the coal-fired plants providing electricity to a large swath of the nation and likely end the building of new comparable facilities.

On April 9th, Rasmussen Reports, a polling organization, release the results of a poll that found that 52% of likely voters “think there’s a conflict between economic growth and environmental protection, thoough 31% disagreed." Rasmussen stated that “support for investing in fossil fuels like oil and gas is also at a new high amidst near-record gas prices and the on-going development of the Keystone XL pipeline which President Obama blocked for environmental reasons.”

The following day, April 10th, Rasmussen released results of another poll that found that 44% of likely voters “believe, generally speaking, that the EPA’s regulations and actions hurt the economy. Just 17% disagree.”

On February 21st, Steve Milloy of JunkScience.com, was published in The Washington Times in an opinion about EPA Administrator Lisa Jackson’s testimony before Congress writing that “Over the past three years, the Obama EPA has conducted a scorched earth campaign against fossil fuel producers and users, especially the coal-fired power industry, with multibillion-dollar rules that provide no meaningful environmental or public health benefits.”

The environmental revolution—a Communist agenda—is being resisted piece by piece by scientists and others who no longer will submit to its utterly false “science” and its UN-inspired Agenda 21 plans to impose control over all aspects of life on planet Earth. A June Rio conference will largely abandon the fear-mongering of global warming in favor of “sustainability”, a matrix of controls that will enslave the world’s population with the worst totalitarian precepts since the rise of Communism and Nazism in the last century.

Agenda21 has been at work in America for decades at this point and few have any idea what it represents. It is destroying property rights in America and that’s just for starters.

On Earth Day—April 22nd—the birthday of Vladimir Lenin, the dictator who imposed Communism on Russia in 1917, the various elements of the environmental movement will flood the world with propaganda. The connection between these two events should not be ignored.

Environmentalism should be soundly rejected and the emerging movement to overthrow it should redouble its efforts.