In Honor of Earth Day! 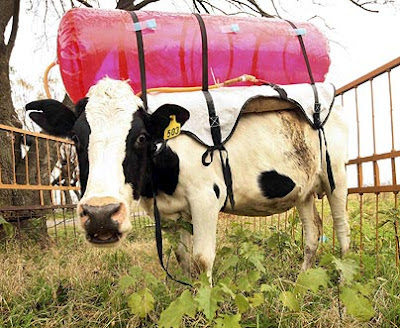 This is an example of how stupid the entire cult of environmentalism is. Some "scientists" measured the amount of methane in cow farts by way of saving the Earth from something or other. If you look closely at virtually everything environmentalists say about any subject, you will conclude that it closely resembles cow farts.

Environmentalists, with the help of politicians and other government officials, have an agenda that has cost thousands of American lives. In the wake of Hurricane Betsy, which struck New Orleans in 1965, the U.S. Army Corps of Engineers proposed building flood gates on Lake Pontchartrain, like those in the Netherlands that protect cities from North Sea storms. In 1977, the gates were about to be built, but the Environmental Defense Fund and Save Our Wetlands sought a court injunction to block the project.

According to John Berlau’s recent book, “Eco-Freaks: Environmentalism is Hazardous to Your Health,” U.S. Attorney Gerald Gallinghouse told the court not building the gates could kill thousands of New Orleanians. Judge Charles Schwartz issued the injunction despite the evidence refuting claims of environmental damage. We’re told DDT is harmful to humans and animals. Mr. Berlau, a research fellow at the Competitive Enterprise Institute, says, “Not a single study linking DDT exposure to human toxicity has ever been replicated.” In one long-term study, volunteers ate 32 ounces of DDT for a year and a half, and 16 years later, they suffered no increased risk of adverse health effects.

Earth Day against the Earthlings
By Daniel Flynn

Most people will go about their affairs oblivious to the day’s significance because the day has no significance to them. We reserve holidays for days that are holy. A holiday invented by a politician seems more of an ephemeral reelection scam than an enduring rite of reflection. Environmentalism begins with hygiene. This is lost on activists eschewing deodorant as a pollutant, showers as water wasters, and toilet paper as a luxury the planet can ill afford. Lacking the initial building block of a clean Earth—a clean body—environmentalists fail in their loftier goals. You can’t attract people by repulsing them

Do you know why Earth Day is April 22?
By Kevin DeAnna

Clue: It didn't start as celebration of butterflies, recycling and solar energy - School children, businesses, clergy, politicians and even the United States military soon will honor the birthday of Vladimir Lenin, founder of the Soviet Union. Of course, they will call it Earth Day. Organized by radical student activists, built on the model of left-wing “teach-ins” at American universities, and created with the objective of furthering progressive activism, Sussman notes that the movement for Earth Day took to heart Lenin’s adage, “Give us the child for eight years and it will be a Bolshevik forever.” However, Sussman exposes in “Eco-Tyranny” that the Bolshevik influence goes beyond tactics. After implementing his tyrannical rule over Russia in the October Revolution, Lenin issued a Decree on Land within his first year as Communist Party chairman. The decree declared that all forests, waters and minerals were property of the state.

Editor's Note - This next set is from my files of 2010 and deals with this issue of Lenin's birthday and Earth Day. RK

Earth Day: An Assault on Man
In recent weeks while addressing Tea Party rallies here on the left coast, I ask the assembled patriots what appears to be an odd question: "Would all those from the former Soviet Union please raise your hands?" A notable number of hands are always raised -- the San Francisco Bay Area is home to a diverse population. I then ask another curious question: "What does April 22 signify to you?" Without exception, someone will shout with great displeasure, "Lenin's birth date!" The crowd clearly sees that I'm on to something. I next ask the former Soviets, "And as a young child in school, who were you told is your grandfather?" At this point several painfully respond, "Vladimir Ilyich Lenin!" "And in the United States, do you know what we celebrate on April 22?" I ask. "Earth Day. Grandfather Lenin has been conjoined with Mother Earth -- and it's no coincidence."


My green is greener than your green
By Patrice Lewis

As we approach this year’s Earth Day – the international celebration in which progressive politicians and celebrities exempt themselves from the green legislation they helped create – the thought occurred to me: Why is it the green agenda is so compatible with socialism and incompatible with personal freedom? The answer is quite simple. Apparently the first Earth Day was chosen to coincide with the 100th anniversary of Vladimir Lenin’s birth, a man whose very existence was dedicated to the eradication of personal freedom for everyone but himself….And it was allegedly the Western supporters of Lenin, if you recall, to whom the term “useful idiots” has been attributed….But the “greenness” schism between progressives and conservative arises chiefly from the issue of control. Who’s forcing whom to do what? Most conservative families just want to live their lives free from government mandates. Most progressives prefer to legislate their agenda, which forces everyone to comply with their vision of an unachievable green utopia……Look, if you want to live naked in a cave and eat only foraged plants, great. If you want to use CFL light bulbs and never drive a car, have at it. If you want a house the size of a bathroom and eat only organic tofu, feel free. Heck, if you want to stay celibate (ha!) so as not to have children, or even eliminate yourself as a means toward reducing the Earth’s population, fine. Just don’t force the rest of us to comply with your personal agenda. We don’t like being useful idiots for Lenin’s – or your – “green” values.