Zika Virus Infections in the Americas and the DDT Question

The World Health Organization (WHO) recently declared the Zika virus epidemic a Public Health Emergency thanks to its rapid spread and possible association with microcephaly. Global conditions for spread of mosquito-borne viruses are constantly changing. But spread of Zika would have been unlikely during the 1950s and 60s because of successful mosquito eradication efforts. Today, the virus readily proliferates in urban environments where the primary mosquito responsible for the epidemic, Aedes aegypti, thrives.

DDT was introduced during WWII to prevent millions of cases of louse-borne typhus and other insect-borne diseases. After the war, it was used to free billions of people from the threat of malaria. In the Americas, DDT was used to control malaria, and also to eradicate Aedes aegypti, the mosquito responsible for yellow fever, dengue, and now, Chikungunya and Zika viruses.
Bolivia began Aedes aegypti eradication with DDT in 1945, and by 1947 it was eradicated. This landmark event led the Truman Administration to sign an agreement to eradicate the yellow fever mosquito from the hemisphere.

Maps showing the geographical distribution of Aedes aegypti (presence shown in red) at different times in the Americas. 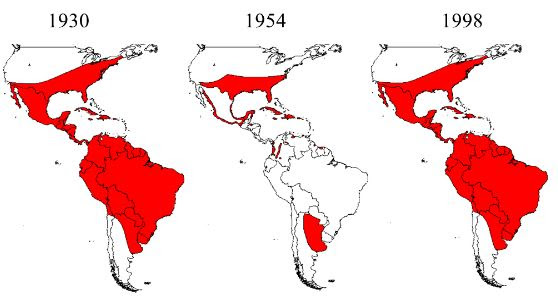 But not until 1963, under the Kennedy Administration, did Congress appropriate funds for Aedes aegypti eradication, placing the Centers for Disease Control (CDC) in charge.  The U.S. program was justified, in part, as a means of preventing the export of Aedes aegypti from the U.S. back into the Aedes aegypti-free countries of the Americas......

Posted by Rich Kozlovich at 3:17 AM