George Stephanopoulos is a left wing operative and not a real journalist: I'm shocked, shocked I tell you!


To quote a man who – if he had really lived – would have to be considered one of the world's unique moralists, Captain Renault, played by Claude Rains in Casablanca as he’s ordered to close Rick’s American Café for political reasons:


Renault: I am shocked, shocked to find that gambling is going on in here!
Employee of Rick's: [hands Renault money] Your winnings, sir.
Renault: Oh, thank you, very much. Everybody out at once!


On May 16, 2015 Onan Coca posted an article titled, “MediaRealizes that Stephanopoulos May Actually be a Liberal Activist and Not a Journalist!” She starts out saying:


“The Washington Post’s Erik Wemple says what everyone else is thinking when it comes to George Stephanopoulos’ recent interview of Clinton Cash author Peter Schweitzer. Instead of simply being a good interview about an important book at the start of a Presidential election campaign… perhaps the interview was actually an attempt by a liberal activist and Clinton ally to put out a fire before it began raging. We’re all talking about this media stuff. But, yes, I think that when George Stephanopoulos goes on with a major figure and talks about, you know, the “Clinton Cash” book or whatever, I could sense that he was going after Peter Schweitzer. At the time, it looked like legitimate journalism. In retrospect, it looks like activism”. 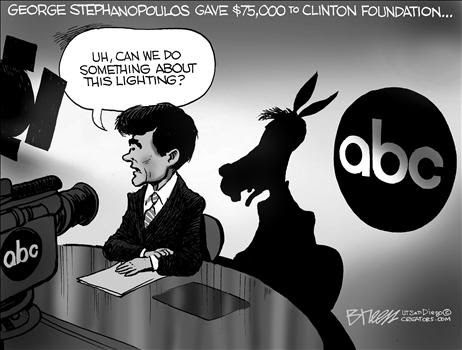 And everyone's shocked?  Over the weekend a number of Fox News shows had their talking heads (for clarity sake, I actually like some of the talking heads) do some commentary on this issue. I might point out since it wasn’t corruption by a conservative the MSM pretty much ignored the issue. But there’s no liberal bias….or it’s very limited....Right?  After all….there’s no such thing as a conspiracy. Right? Of course there are those small minded individuals who will wonder if it’s possible there’s a bigger reason why there’s so little coverage by the left wing media. Is it possible this is a deeper story than just good old George? Is it possible they’re all guilty of this kind of stuff? Nah, that can’t be true! They’re full of liberal purity, like the Clintons, and the Kennedy’s.


There were two things that I found amazing.
First off, it amazes me just how many people actually watch this guy. Oh, I know the numbers on the MSM are dwindling, but he still has quite a following. I never watched him for more than a few minutes total since his very first show. Why? Because he made his bones as a Clintonista left wing operative and a spin master. It’s part and parcel of who he is. Why would anyone think he would change? He just gets paid a whole lot more from ABC for spinning the truth than he did when he was paid by the Clinton administration for spinning the truth.


Secondly, it never ceases to amaze me how many in the media, including Karl Rove, who attempted to claim Stephanopoulos had made the transition in everyone’s mind from a Democratic activist to a journalist. It reminds me of a time when conservative commentators– perhaps I should say seeming conservative commentators - were crying crocodile tears a few years ago because of the New York Times financial problems, fearing the Old Gray Hag would go out of business. All that hand wringing irrespective of the well known historical facts showing the NYT has been a left wing treasonous canker sore on the butt of journalism since the Roosevelt administration. One reader pointed out his operative status was only a “secret from other media types, which explains why you can't trust any of them, because at best they're only a 5 watt bulb, when a 100 watt bulb is what is needed for that type of job”.


reg Gutfeld – one of Fox’s talking heads I like – is quoted in the article as she says:


“there is even more reason for concern for ABC. Because on the heels of the Stephanopoulos – Schweitzer interview, the Clintons used the piece to try to discredit the book and its author. They sourced each other, that’s the great thing. It’s like the Clinton campaign fact checks Schweizer’s book, and then Stephanopoulos uses that in the interview and then Clinton goes back to the Stephanopoulos interview and says,“see.” So it’s this little circle of sourcing each other. It’s like two criminals providing each other an alibi.”


But as for the rest of them - I guess they’re just “shocked, shocked” to find there’s corruption going on here, even as they attempt to find reasons to allow these people to continue in their corruption. Apparently they also need to go along to get along in order to play the game.
Here’s another interesting quote from Casablanca I find applicable.


Renault: Rick, there are many exit visas sold in this café, but we know that you've never sold one. That is the reason we permit you to remain open.
Rick: Oh? I thought it was because I let you win at roulette.
Renault: That is another reason.


Nothing is ever as it seems, except to remember that corruption is always part of the human equation. However, since leftism has no moral foundation we should expect higher levels of corruption in everything they do. In their case it’s not a conspiracy. It’s intrinsic to leftist character! Here's one more quote that could help define most of the media, conservative and liberal:


Renault: I have no conviction, if that's what you mean. I blow with the wind, and the prevailing wind happens to be from Vichy.


The difference between Captain Renault and the media? He was honest about his corruption! Now we have clarity!
A personal note to Bob.  There really wasn't much dialogue in Casablanca, but it is profound, and here's a site you might enjoy http://en.wikiquote.org/wiki/Casablanca_(film)
Posted by Rich Kozlovich at 6:49 PM