Suffering is the Beginning of Wisdom: Part II, Did America Really Vote For This? 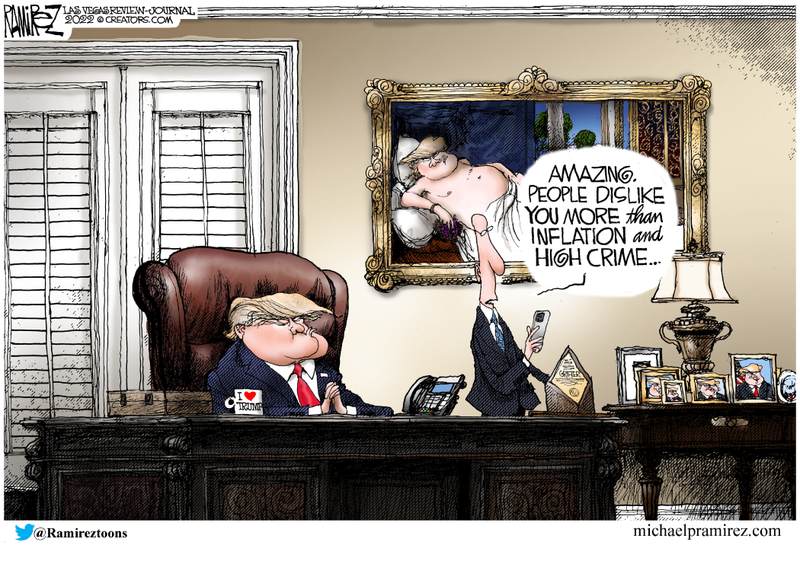 I think this cartoon epitomizes the constant drum beat we're hearing from the media and politicians all over the nation, on both sides of the aisle.  If this cartoon is true, then we're really expected to believe this Red Wave failure was America's rebuke of Donald Trump and an embrace of unending inflation, high crime rates, massive spending, massive taxation, sexual grooming of America's children by the public education system, an out of control administrative state, expensive energy and energy shortages, racial disharmony, uncontrolled crime, unconstitutional mandates for false pandemics, and in short:  We're expected to believe Americans supports destroying America.

Are we really expected to believe that?

Well, if that's true then why aren't we seeing that being played out in the real world?

If this election is a reflection of what America believes, then why is it we're seeing corporations that went all Woke, like Disney, are doing so badly?

Their stock is crashing, there are travel restrictions for company business, a hiring freeze and layoffs in the planning, and the nitwits running Disney claim they've been around for a long time and they will weather this storm.  The only problem for Disney is there isn't a Walt Disney in charge.  There are leftist nitwits who caved in to pressure from a small group of radicalized employees, and picked a fight with DeSantis, and lost.  Their share value has dropped 62%.

If this election is a reflection of what America really believes then why are all these ESG enterprises, and investment companies like BlackRock, losing customers and clients? ESG represents very real dangers to America.  Are we supposed to believe Americans think that's okay?

If this election is a reflection of what America believes, then why is it all over the nation parents are challenging the dictates of out of control tyrannical school boards who are mandating sexual grooming of America's children, pandemic mandates on masks and vaccination and CRT, and replacing these petty tyrants with conservatives who understand they work for the parents, not the other way around.

Election night did not deliver the overwhelming victory Republicans had hoped for on a national level, but on a local level — in school board races — conservatives picked up a wave of wins across the country. This week, conservatives flipped at least nine school boards in at least six states — Michigan, Maryland, North Carolina, South Carolina, New Jersey, and Florida — giving them conservative majorities, according to two parental rights groups who endorsed many of the victorious candidates.

If that's true, and it is, then why would we believe these same parents voted for candidates who oppose them on every issue involving education, protection of America's children, and societal stability, even targeting them as domestic terrorists?
In the media the far left wing misfits like CNN's Don Lemon are being demoted because their viewership is dying, and I don't think CNN will survive, even under the new ownership.   So, are we expected to believe Americans who are fleeing these left wing news sources are voting for the very things they're refusing to watch?
Are we really expected to believe that?
Crime is exploding all over the nation.  And it's being caused by Democrat leadership and their failure to prosecute criminals properly and often not at all.   The streets of Philadelphia sre so bad Mexico is using footrage of them in ads to scare young people away from drugs.
Defund the police and release violent criminals into the public is an unending theme among Democrat politicians.  Politicians who have absolutely insane views and yet were elected, like John Fetterman.  Are we expected to believe Americans really want to defund their police forces all over the nation, have uncontrolled illegal immigration, create sanctuary cities to prevent their deportation? A constant theme among these leftist politicians.  It's clear these leftist elitists don't care people are being killed on the streets, in stores, and worrying about paying their rent. Daniel Greenfield asks:  “How Could Anyone Possibly Vote for These Freakshows?”
In New York City a man was beaten to death with wooden board by a mob.  Was this an anomaly?  No, in point of fact this Democrat-controlled city is facing a major increase in major crimes:
".......increasing by 29.1 percent since this time last year, according to NYPD crime statistics. Felony assault is up by 13.9 percent, burglary is up by 28.4 percent, and robbery is up by 31.5 percent.  Furthermore, in the North Queens Patrol borough — where Sunday’s homicide occurred — crime has risen higher than the city rate at 45.9 percent since last year. Felony assault is up by 24.2 percent, rape is up by 26.6 percent, and robberies within the area have risen by 58.3 percent."
Are we expected to believe that's what America likes, and voted accordingly?
Well, if what Americans are supporting, and what Americans are rejecting in the real world is any indication, it would appear Americans don't like any of that, and yet Democrats managed to flip several state legislatures, putting those states under total Democrat control.
If Americans don't support businesses, school boards and the news media that supports Democrat policies, then why in the world would America vote Democrats into offices that gives them tyrannical control over their lives?
They wouldn't, so there must be another explanation, which I will address tomorrow.
Posted by Rich Kozlovich at 6:12 AM

Email ThisBlogThis!Share to TwitterShare to FacebookShare to Pinterest
Labels: My Commentary, Suffering is the Beginning of Wisdom