Let's Try and Get This Right! 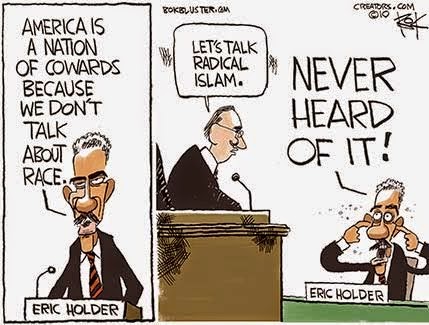 “Confessions of a Public Defender”, by Michael Smith, American Renaissance, May 9, 2014

Editor's Note:  I know I ran this when it first appeared, and I ran in again a few weeks ago. I've concluded I should probably run it every week, because every week I keep seeing the same stupid comments I saw the week before and will see them again next week from all these race hustlers and leftists.  It really disturbs be that these stupid comments aren't just from leftists.
Let's get this right.   Michael Brown was committing a crime.   Police responded to complaints from the local business community.  He resisted arrest, he died from a heart attack on the way to the hospital.  He was not choked to death.
Eric Garner wasn't a gentle giant. He was a violent thug of a giant that attacked and presumable tried to kill the cop that killed him since he was trying to get the cop's gun.  Trayvon Martin was a thug who attacked the man who shot him, and he wasn't a child, as leftist celebrity idiots like Richard Dryfuss try to claim.
Now....let's try and get this right....once again.....all three men were thugs and two were committing crimes when they died.   As for Trayvon Martin - clearly he was up to no good.  One more thing.
Who's Antionio Santiago?  Was he guilty of some crime?  Who killed him?  Why did they kill him?  And who marched at his killing?  More importantly, how many news stories did you see on the television about him?  Even on Fox News.  RK
I am a public defender in a large southern metropolitan area. Fewer than ten percent of the people in the area I serve are black but over 90 per cent of my clients are black. The remaining ten percent are mainly Hispanics but there are a few whites.

I have no explanation for why this is, but crime has racial patterns. Hispanics usually commit two kinds of crime: sexual assault on children and driving under the influence. Blacks commit many violent crimes but very few sex crimes. The handful of whites I see commit all kinds of crimes. In my many years as a public defender I have represented only three Asians, and one was half black.

As a young lawyer, I believed the official story that blacks are law abiding, intelligent, family-oriented people, but are so poor they must turn to crime to survive. Actual black behavior was a shock to me......To Read More.....
Posted by Rich Kozlovich at 4:54 AM